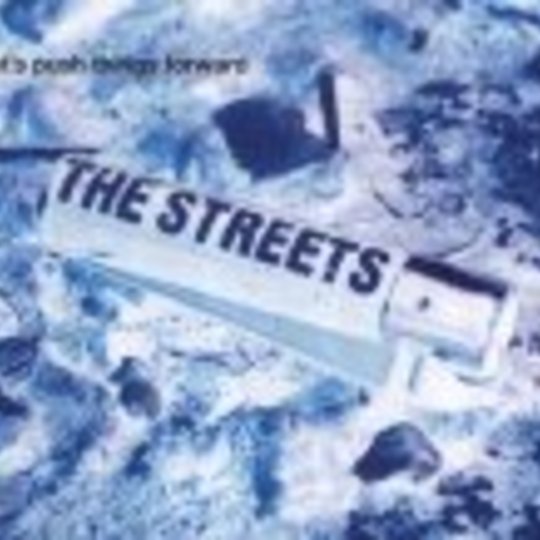 Some time ago, somewhere in the West Midlands, in some nondescript Birmingham over-spill town, in some depressing seventies concrete block of a comprehensive, in some school room that over-looked the industrial estate which some of us would end up in, during some lesson or other, I would sit, surreptitiously listening to the radio.

The first time I heard The Streets’ debut single, Mike Skinner‘s voice immediately reminded me of those babbling wide-boys I used to hear ‘presenting’ shows on the pirate radio stations I used to listen to in school, one walkman headphone hidden in an ear. Beneath the scouring fuzz of static and between the hip-hop, techno and ACIEEEED! burbled a Brummie bedroom DJ, his slang-ridden patter heavy with urgency.

So, I was endeared to this boy Skinner’s, seemingly novelty, home-made garage 2-step ditty. It was a funny little thing, but I wasn’t expecting anything more.

How was I to know he was about to release the most imaginative, bold and startlingly original debut albums in an age?

Where Skinner is exceptional is the way he articulates a voice that, strangely, is rarely heard - at least not with the same precision - in music today, that of the contemporary generation, the young, city/suburb dweller, those whose daily life doesn’t chime in with the sorry, bling-bling and violence; Cristal and furs, America hypnotised UK garage scene or the soul-wearying, retro Brit-pub guitar bands who seem to be under the delusion that there is still more blood to be wrung from the stone of 40 year old, fucking Grandad music (anybody who sincerely uses the term “rock n’ roll” in 2002 should be run out of town, quite frankly).

But still, it’s the mundanity of modern living that Skinner chronicles. His is a world of sitting around the front room with his mates, ‘Gladiator’ on DVD, ‘Grand Theft Auto 3’ on the PS2, a home-made dance mix burned onto CDR on the stereo, “shit in a tray“ takeaway trays littering the coffee table, supping cans of Kronenburg and puffing on a spliff as he texts a girl he met out clubbing.

No, it’s not particularly my life either, not entirely anyway. But it’s an immediately recognisable one. But what’s the point of it all? Who would want to listen to a list of everyday experiences?

Well, judging by the way The Streets have been enthusiastically greeted, a large number of people, especially if it is executed with the exceptional clarity of vision displayed here. It has always been essential to record the now, to take a snapshot of the world we’re living in as a way to make sense of it all; to classify and clarify, and this is what Skinner skilfully and diligently does. But if you think that cataloguing the average life of a ‘geezer’ in 2002 is all he does, you haven’t been listening.

Whilst Skinner lives in and enjoys and understands the world of his ‘Original Pirate Material‘ LP, he never wallows in it, nor even actually celebrates it. In fact it’s abundantly clear that he not only recognises the hollowness of the treadmill of booze and birds and back again but, at times seems disgusted with it. Frustration and irritation regularly boil to the surface, “I feel like PUKING“ he spits angrily at one point, clearly not just in reference to having had too much brandy.

Though ultimately positive, ‘OPM’ is a dark record - there are frequent references to winter and cold and empty streets - and one which is not content with the status quo, an album that shakes the bars of life’s cage, that wants to wake people up.

“Round here nothing seems to change / same old thing everyday“

“England you are dreaming - GET OFF YOUR ARSE“

Skinner probably thinks he’s made a 2-step / garage track, but like a few other tacks on the LP, ‘LPTF’ harks back over the past two decades of indie-type music, mainly, of course to 2-tone. There is a skeletal ska skank to this, the concrete jungle tones of the Specials as well as a bit of The Beat and even some Jilted John in there. It’s also worth noting that the whole album was recorded in a bedroom giving it a punk DIY aesthetic.

Closer to the present day the rueful, righteous anger of ‘Different Class‘ era Pulp are recalled - the lyric “round ‘ere we say birds, not bitches“ reminds me of Pulp’s class war cry of “grass is something you smoke / birds are something you shag“ - and also Arab Strap‘s minimalist electro backing, and general tone of the ‘First Big Weekend‘ single and ‘The Week Never Starts Round Here‘ album can be heard in The Streets’ weedy beeps and bips. Most of Skinner’s music is rarely nothing more than a click track for him to rattle out his ‘city poetry’ over.

‘Let’s Push Thing’s Forward‘ shows Skinner in typical clear-eyed, determined mood. The tunes sorrowful sax (which has helped with those Specials / ’Ghost Town’ comparisons) and the dour, one-finger, repetitive rhythm is in contrast to Skinner’s ebullience, “this ain’t the down, it’s the up-beat“ he insists, refusing to be sucked down into complacency and defeatism like the haters who bellyache a lot but never do a lot. Triumph over adversity is it’s message.

It isn’t the best song on the album - it’s one of the weakest, in fact, better are ’Don’t Mug Yourself’ which is, quite simply, the best, most hilarious pop song to come along in a dog’s age, and the beautiful, dewy-eyed, 90s rave scene reminiscence of ’Weak Become Heroes’ which actually never fails to brings a lump to my throat - but it is the album’s positivism distilled.

But the album isn’t ‘the most important album of the year‘. It’s actually much more important than such a silly, empty, ‘Q’ magazine-style tag would give it, and it’s far better than just being ‘the best album of the year’ - I mean, God knows those are always two-a-penny anyway. But it is remarkable and it is practically unique and this is due to it’s level of empathy with it’s listener, which is a shockingly rare thing in music today. I can see it being cherished for a long time to come in the same way that, perhaps, The Smiths or Nirvana albums are, in the personal way it has an affect on those who identify with it.

While others stagger down musical blind alleys, Mike Skinner has proved he’s streets ahead and ‘Let’s Push Thing‘s Forward‘ is his clarion call.