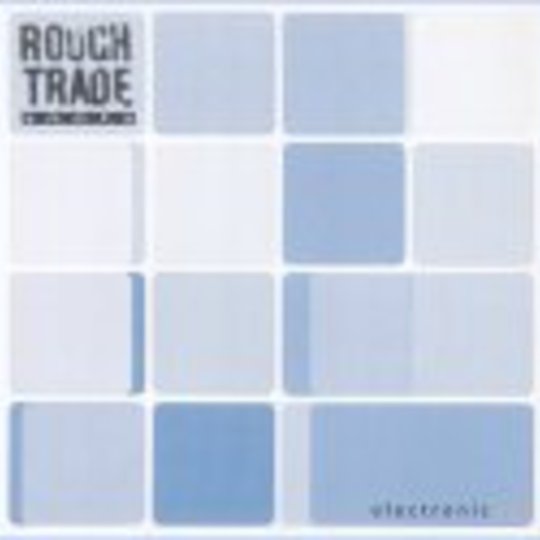 “_I hear a new world

So strange and so real

Hear that? That’s the sound of the future. Or, to be more precise, electronica, and ‘Electronic 01‘ - Rough Trade Shop’s follow up collection to last years excellent quarter century celebration, the snappily titled 4-disc box set, ‘25 Years of Rough Trade Shops‘ - attempts to hoover up some of the scattered gems from the past forty years of electronic based music.

Though not quite a ‘Now That’s What I Call the Greatest Avant-Electronica Album In The World... Ever!’ greatest electro hits compilation, many of the mightiest names are present, from Brian Eno and John Cale to Aphex Twin and To Rococo Rot, each making up their own particular facet of what is surely the most bewilderingly diverse and innovative of all musical genres.

Nothing dates so quickly as the future, they say, but if the older tracks here do sound a little creaky and of their time now, then it’s only because electronica has moved so far, so quickly, whilst guitar based music, by and large, seems to have got stuck somewhere in the early sixties, forced to forever repeat itself, endlessly chopping out minor variations of the same old tunes in the same old style. The guitar music loving public - myself included - may be quite happy with that, but this is why Starsailor et al don‘t raise many eyebrows whereas anybody attempting to re-create pure 60s electronica, would.

So, while the electronic music tracks from ten, twenty, thirty years ago would sound out of place in today’s musical climate, what still can’t be denied about them is their future vision; their forward propulsion and desire to pull away from all else.

The oldest track here is one which I’ve been dying to hear for ages, it is ‘I Hear a New World‘ and it doesn’t disappoint (well, okay, the Pinky and Perky-style backing vocals let it down a bit). It is the work of the eccentric, near-legendary early 60s producer Joe Meek who was, in his way, the forerunner to today’s bedroom techno boffins. For, in his London flat at 304 Holloway Road, he would compose ’far out’ and ‘spacey’ tunes, recorded using mainly a clavioline, - an ancient synthesiser - arcane or home-made equipment and instruments and a lot of found sound.

It sounds a bit wigged out now, in 1960 it must have sounded totally alien and utterly bizarre. Needless to say, it was all but ignored at the time, crooners and trad jazz were the order of the day - and, if the ‘teen-agers’ were to be believed, so was this new-fangled rock & roll music from America - but electronic hymns to futurism? Just too darn weird to ever catch on.

Anyway, ‘Electronic 01‘ then... actually, I lied, electronica isn’t entirely futuristic music, it has also been the reflector and chronicler of the age: the late 20th century, the post war, cold war, cold fear age where technological advancement got turbo charged, where sex ended up meaning death and acid meant both rain and music. Exciting breakthroughs in entertainment and musical equipment went hand in hand with advancement in military hardware. So, what else to do than to use this new technology as a way to go about understanding it, to turn the techno-fear onto itself, to reduce the shock of the new and, finally, to embrace it.

The acts on this collection grew up under the shadow of the H-bomb, the atomic bomb, the nuclear missile but were also introduced to space travel, to television, to the computer.

Take the BBC Radiophonic Workshop‘s theme to ‘Dr Who‘- rightfully included here. Listened to away from it’s daft but likeable TV show, this incredible piece of music can be heard for what it is: an atomic age anthem, full of fear and wonder at the ever accelerating pace of the “white heat of technology” era.

What else is there? Naturally, Kraftwerk turn up, but, though a classic track ‘The Robots‘, undoubtedly is, I can’t help but feel disappointed by this choice for some reason, I think I would have preferred ‘Neon Lights‘ or, even better, ‘Home Computer‘ - an early and far-sighted meditation on the massive impact that that plastic keyboard thing in front of you would have.

Elsewhere, everything from ambient to industrial is covered, but even with 41 tracks over two discs, not everything is here. While industrial revolutionaries Throbbing Gristle make it, nothing from the massive and menacing industrial rock/body music scene they pioneered is, so no Front 242, Nitzer Ebb or even, sadly, the astonishing Skinny Puppy, all of whose sound was further watered down and sweetened by the likes of lesser, but far more successful, acts such as Nine Inch Nails and The Prodigy.

Incredibly there are very few tracks from the 1980s when, in the age of nuclear attack warnings and Space Invaders, electro finally became mainstream, from synth pop at the start of the decade to the all-pervasive dance explosion at the end of the 80s.

Synth is represented by the Human League’s po-faced ‘Being Boiled‘ and an early Depeche Mode instrumental, but there’s no acid house no hip-hop and no disco (CRIMINAL!). Maybe on ‘02’ then, eh?

But enough already about what isn’t here, I must point out a few golden nuggets nestling in amongst it all. Firstly there’s Schneider TM’s arresting version of The Smiths‘ ‘There is a Light That Never Goes Out‘ where the indie standard becomes a twitchy electro-pop ditty which captures, and maybe even enhances on the wistful, melancholy romanticism of the original. “Driving in your car... / if a double decker bus crashes into us / to die by your side / it’s such a heavenly way to die“ intones the robo El Mobo sadly, making it sound almost like a JG Ballard-esque paean to autophilia.

But who needs that when we have the real thing? The Normal‘s musick concrete classic‘ Warm Leatherette‘ is based directly on Ballard’s notorious car wrecks and sex novella, ‘Crash‘ and the hilariously deadpan ‘blank generation’ voice drones out such gems as: “a tear of petrol / is in your eye / the handbrake / penetrates your thigh“

From the sinister, shadows lurking dark disco of Autechre and Aux 88 to the fevered, S&M tinged, neon-lit pop of Fischerspooner and *lb*, this is mainly night-time music; velvety, feral and sybaritic. A twilight cruise through European cities, faces illuminated by the dashboard lights; furtive sex in oil slick-black back alleyways. An ungodly mix of petrol, semen and sweat.

On the other hand electronica can have a strangely pleasing frosty purity to it, all crushed ice and sheer steel; sharp, shivering, shuddering.

Judged by counting the beads of sweat on the brows of their heroes, rock music fans like to covet a supposed real realness to their music - hence their ceaseless bellyaching about what they see as ‘manufactured‘ music - electronica, meanwhile, has actually tended to be a celebration of it’s own artificiality. From the members of Kraftwork promoting the image of themselves as being robots and the emotionless tones of the 80s synth pop singers to the computerised voices in modern electro like Bruce Haack and Daft Punk (not here), and then there’s the ‘soulless’ repetitive beats, the violent stabs of sound or distant beeps. It’s sometimes the very exactness of the sound that makes it thrillingly synthetic.

And it’s this unflinching pride in being wholly artificial that the rock fraternity rail against, but, really, what could be more bloodless and false than to keep on regurgitating old Stones/Velvets/Pistols licks? The work on here has been honed and perfected with an almost obsessive zeal (actually, forget the ‘almost’). Hearts and minds, is what it is. You want passion and dedication? Right here is where you'll find it, blood, sweat and circuit boards.

Turn this gemstone slowly in your hand, see how the light catches each of the many, different facets. Each one perfect and perfectly unique. And this is just number 01...

Joe Meek‘s suicide in 1967 meant that he never did get to properly hear the strange, distant new world[s] that were haunting him. No matter, the trail he blazed was quickly followed by all these acts here and many others and many others to come. New worlds are calling us still and electronica has headed towards them at warp (ho ho) speed.