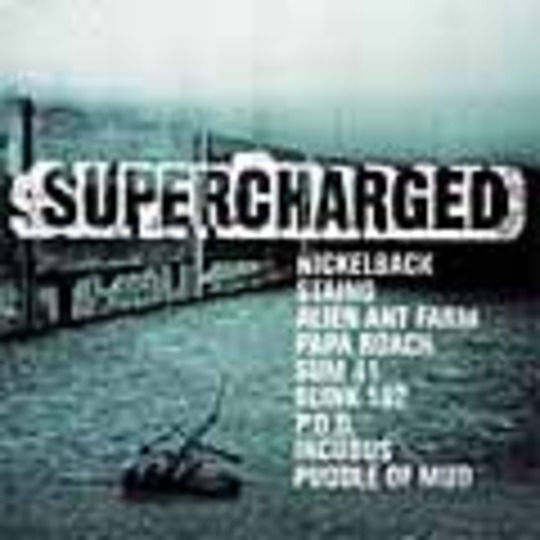 Once upon a time, in the not too distant past, metal was an underground culture. Being associated with it made you the butt of jokes around town or, in some cases, a social outcast or worse. In the mid 90's this changed thanks to the likes of bands such as Korn & Machinehead. Spin on alsmost a decade and things are all change. The hoodies and wallet chains are evident on every street and every step is a potential skate ramp. One other thing is that there was no such thing as a metal compilation album, the nearest thing you had were Kerrang! cover CD's or the Drilling A Vein budget CD's released by Roadruner. Now this has changed and their is a selection to cater for all tastes.

Supercharged is one of them and it does have a varied selection that covers the whole spectrum of the genre termed nu-metal. From the opener of the commercially accesiable musings of Fred Durst and his crew on 'My Way' through to the final track of the new kids on the block Puddle Of Mudd with their track 'She Hates Me (proteges of the afore mentioned Mr. Durst) there are many gems. The chart crashing anthems of Alien Ant Farm's cover of the M.J classic 'Smooth Criminal' and Linkin Park's 'Crawling' set the tone perfectly. 'Old school' bands mix in with the new wave stuff nicely with Mazza Manson and Slipknot producing the goods with the anthemic 'Fight Song' & 'Spit It Out' respectivley as well as a reapperance of Scooter Ward and the Cold crew who, after a burst of publicity, promptly disappeared from the face of the earth. Their track Just Got Wicked being one of the stand outs on the album especially as there is even a lyrical reference to the Korn/Deftones track of Wicked (even if Scooter now sounds like Creed's lead vocalist Scott Stapp)

Fillers on the album are few. Godsmack produce the turkey of the album with 'Bad Magick' and Incubus are almost as bad with 'Stellar' but apart from those the album has a Grade-A line up. Only problem is, many people will have most of these tracks as it is mainly the single releases by many of the bands but if you don't own them already and are looking for one compilation CD, I recommend you cast your eye over this little beauty.... you won't be disappointed.

For more info go to the official site.

My House In Montmartre