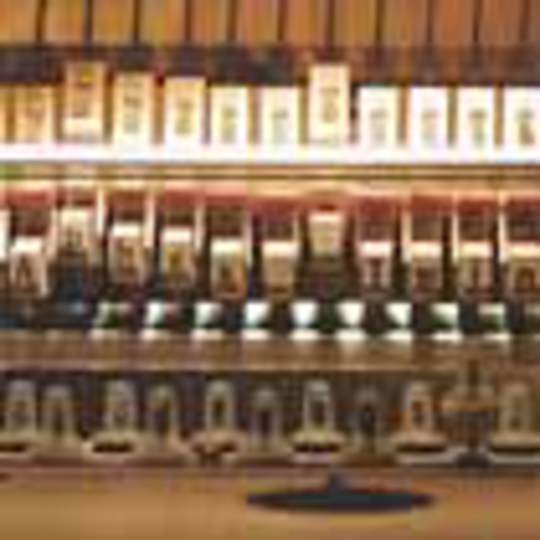 The small media kerfuffle that ensued in the wake of the news that the only future Aphex Twin releases would be posthumous proved to be all for nothing when this album emerged recently. The notoriously elusive Richard James must have felt that the fruits of this freedom from music industry pressures were well worth going back on his word for. I’m inclined to agree with him.

I didn’t listen to this album straight away. I wasn’t sure what to expect. I know very little about Aphex Twin and even less about the dance scene in general. All I knew was that I loved some of his previous releases such as ‘On’ and ‘Iz-Us’. I was immediately struck by the notion that innovation could be brutal, beautiful, mournful or even humorous which I’d always felt to be lacking in most dance music. The electronica seemed to be a boundary between the music and the listener. Such a wealth of feeling was something I thought could only be found in my comfortable Indie/Rock territory. I was clearly wrong.

I soon discovered that Aphex Twin had a whole legion of acolytes from the six-stringed world, most notably Radiohead whose ‘Kid A’ album would, needless to say, have been much poorer without the influence of this enigmatic and prolific man. Indeed, the crossover into Post-Rock seems to have been made in the album’s more organic moments.

I finally got round to listening to ‘Drukqs’ a few days later in a desperate bid to drown out the turgid and frustratingly facile local radio station that leaked from the bus’ stereo on my way to work. I gazed out of the window and embarked on a far more pleasant journey altogether.

This album is huge. Clocking in at almost 2 hours, it’s probably bigger than Weezer’s entire back catalogue. I’ll be honest here and tell you that reviewing this album is a daunting task. However, after many listens it appears to a be an album of 2 rather extreme halves. There are the atmospheric, stripped down, Japanese-tinged soundscapes and the other more rambling, multi-layered, hacked-to-the-hilt tracks. For instance, there’s the sinister bastard-son of ‘Come To Daddy’ that is ‘Taking Control’ but just when you think he’s incapable of it, Aphex Twin goes and writes the most beautiful, simple little piano ballad I’ve heard for a long time with ‘Avril 14’. It’s all in a day’s work for easily the most creative composer of his generation. It wouldn’t surprise me if music students are studying this album in 200 years time.

Having heaped all this praise on ‘Drukqs’, it’s not something I could listen to a lot. Like it must have taken to create, this album takes patience and effort to enjoy it properly. And like a collection of old memories, it’s something to shelve away and savour when you need it most.