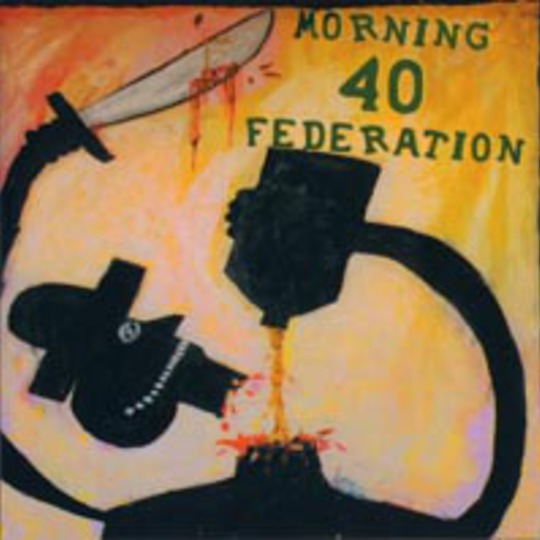 Morning 40 Federation, for those unfamiliar with New Orleans’ finest Ninth Ward jazz troupe, are a bunch of perpetually inebriated dropouts hell-bent on creating some of the most entertaining booze-fuelled ‘performances’ the City’s jazz bars have ever seen, thanks to their sleazy, blues-guzzling big-band jazz vibes that often bizarrely involve the participation/heckling from local hobos, street performers and general scene hipsters.

This is their first proper release and valiantly attempts to embody all the sleaze, grime and troubled laisser-faire attitude bedecking the many cigar-puffing, wine-faced barflies slouched in the Bourbon Street jazz bars drinking their cheap whisky. You know the scene: honky-tonk piano echoing in the background, sharp-tongued women chewing tooth picks behind the bar, Roger Rabbit *chatting up some curvy, blonde-haired jazz singer in the corner. It’s a sound drenched in the blues that reverberated through the city in the 1940s (imagine jazz legend *King Oliver *playing cards with a run-down *Jon Spencer, and *Tom Waits *getting the round in and you might be a little closer to pulling up a bar stool next to these gents), but trying to encapsulate the chaos and mood of such a spirited performance on CD is evidently a little harder to achieve.

Lasting for over an hour, the music flops, limps and slurs its way through their trademark style, burdened with the unbearable weight of life outside the smoky confines of the backstreet bar. It’s an often depressing, bluesy affair and just when they begin to pick themselves up for the energy-pumping 'Jimmy Cousins' _they once again slouch right back in the corner come final orders with _'Bottom Shelf Blues', a drunkenly optimistic ditty about picking your feet up and sorting your life out come Monday morning.

They may be becoming legendary figures in their native New Orleans, but unless they release something anywhere near as exciting as their live show, I’m afraid that’s exactly where they’ll stay.