Bring Your Own Poison: The Rhythm Factory Sessions 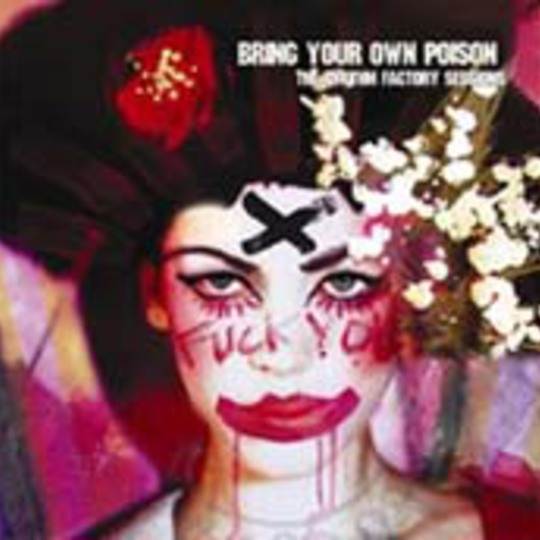 Lets face it; this place is just like every other London venue. A light, boho-ish bar leads into a dark, low- ceilinged cavern with an array of ‘interesting’ smells wafting over a typically sticky floor - in other words the perfect setting to enjoy some fking loud music. Forever to be associated with the rise - and more recently the fall - of **The Libertines, this East London institution has played host to some of the Capital's finest. Now, courtesy of Believe Music and some fantastic artwork, you no longer have to tumble along Whitechapel Road to get a taste of a venue that was once described to this correspondent as “the place I go to lose my mind”. Welcome to The Rhythm Factory.

Unsurprisingly, first up and fully intact are The Libertines. This is why people talk about this band - ‘Up The Bracket’ sounds fantastic. Bleary and tumultuous, it’s everything you want The Libertines to be and a striking reminder why London’s revolving ‘Special Guest’, should depart Shittyshambles – the performance of 'Killamangiro' on this record is a little embarrassing to say the least - and get back to making the noisy brilliance of this great opening track. The excellent Lams bring things down into the gutter with Mark Hammerton’s (co-creator of this compilation) guitar sounding deafeningly filthy. The chorus refrain that marks the close of '(You’re) On The List' makes you feel like you’re being put through a melodic blender. Selfish Ct** on the other hand, make you want to break the album in half and eat the remains. Everybody knows that this lot have nothing to do with music - I mean, neither would I if I was churning out this sort of st. Yet, the fact that Britain has produced a band called Selfish Ct who say nasty things about nasty people and destroy their audience at every gig, should be applauded. Unfortunately, you can’t hear the clash of bodies throughout ‘Authority Confrontation’, but I’m sure a number of souls were lost during its crushing four minutes.

The Paddingtons and Thee Unstrung provide fairly standard punk beaters - The Paddingtons taking the edge with a ferocious ‘Tommy’s Disease’ – but their energy is fierce and comes across as convincing, if not a little dull. Art Brut are anything but dull and are one of those bands you’d never listen to on record, but would happily bounce off the walls with them at a gig. In fact, the majority of bands that appear on ‘Bring Your Own Poison’ suit the live situation far more than the studio – hence why the chaotic chops of Art Brut’s 'Moving To L.A', the poppy grime of The Rocks' ‘Celeste’ and the bopping joviality of Tigermoth’s ‘Give Me Something’ have real strength and flair.

If you’re expecting pristine recordings, look elsewhere. Listening to this album makes you feel like you’re teetering on the edge of a tall building and it's this nauseating thread of unpredictability that makes you feel threatened, and for want of a better word – wasted. With a storming hidden track wrapping things up in true frenzied style, a complete listen to this record is an exhausting experience. Of course more than anything, this is a document of a time; a Polaroid of the last year in a city. In places it dips and in others it soars, but this is an important release nonetheless. With Chris Morris's new satire set to destroy styled Hoxton types and hair-finned fashionistas early next year, 'Bring Your Own Poison' may be the last vestige of raw, uncompromising material to emerge from the East end for some time.

Some Kind Of Monster