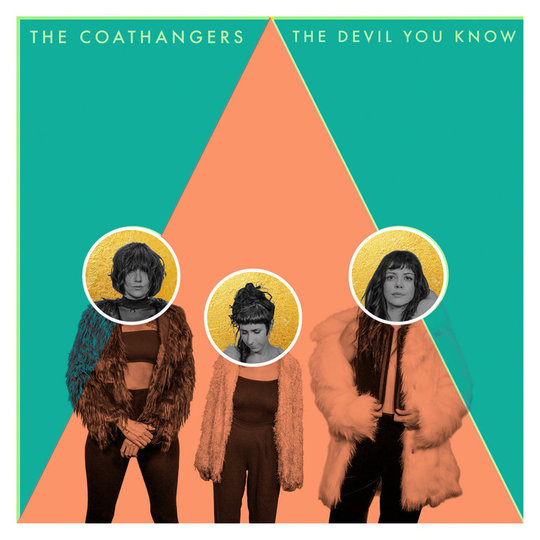 Emerging in 2006 from Atlanta, Georgia with a ragged DIY sound exemplified on their self-titled 2007 debut, The Coathangers have escaped many garage rock fans attention over the years despite their prominence in their homegrown scene.

On this, their sixth studio album, the three piece have certainly come a long way in terms of proficiency but not too much has changed in their aggressive approach and confrontational attitude. The band tear into the personal and political with equal vigour, displaying a kind of intelligent simplicity that lends the material a purposely naive charm to undercut the buoyant brutalism of their playing.

Songs like ‘Crimson Telephone’ throw back hard to early Babes In Toyland - a crashing cacophony of grunge and sneer (“Hide the scars, hide the scars” we hear, whispered) that proves winning in both its slack as fuck delivery and frantic, screaming chorus - “The more you see the less you know.”

‘F The NRA’ sharply and smartly attacks the arms industry in its considered, quippy verses (“‘Cos you know war’s just part of life / You know war’s just a way to get to the other side.”) before exploding into its chant-along chorus - the content of which you can surely guess. At moments like these you can hear a lineage from as far back as The Wipers or, as on ‘Last Call’ a hint of minimalists like Young Marble Giants and their lo-fi ilk but with an unerring tendency to release the tension via moments of full-volume release. This is, of course, an entirely positive thing.

That the songs are split between the three instrumentalist/vocalists (Julia Kugel, Meredith Franco and Stephanie Luke) adds a range of colour and shade to the basics of garage punk and on retro-inspired tunes like the anti-capitalist gem ‘5 Farms’ (“Can’t take it with you / Nobody gets out alive”) the spirit of Sub Pop melds with a Go-Go’s sweetness to whip up an Incesticide era Nirvana moment of alt-pop excellence.

On scratchy, surging songs like the supercharged ‘Memories’ the band shows a strict form of savagery that, while intoning “I’ll be your lighthouse in the dark” simultaneously feels threatening and almost overwhelming at its climax.

“I take what I see / Obsession” opens ‘Stasher’, an anti-materialist anthem that builds from squawking guitars and runaround bass into a piano-slammed chorus - “You get what you get / But I haven’t got all of it yet.” It’s nihilism run through a humorous wringer, with a good dose of rage to help force it into the memory.

Closer ‘Lithium’ is a stoned drug dirge that rattles spectrally as it waves a delicate, high hand to the punk rock that’s preceded it with a macabre kiss-off line - “One pill, two pill - you’re my new thrill.”

The Devil You Know is a vital and exciting record - one which gathers up the past and pointedly thrusts it into the present. Topics like institutionalised evil, war and greed are always valid targets and The Coathangers go for the throat - and draw blood - pleasingly and memorably at every opportunity. This should be their moment of glory.