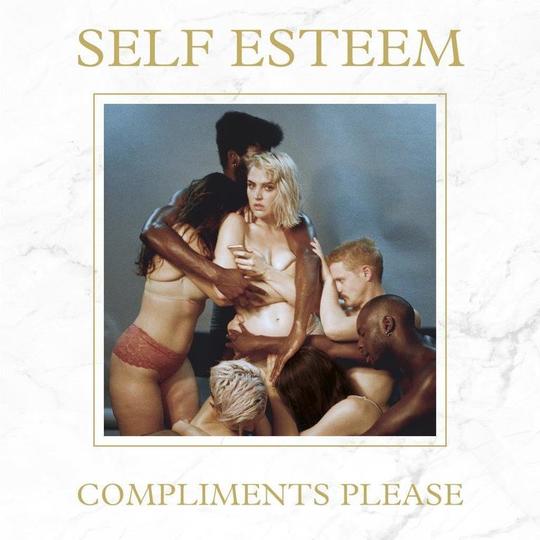 A while back, a journalist wrote something on the Quietus about how pop artists should stop trying to be more than pop music. Artists were wearing out the whole ‘female empowerment’ shtick, she said, waving the phrase around like a promise for more flavour and fewer calories. I understood where she was coming from - I have an inbox full of folks shouting ‘female-fronted!’, too - but the ageing punk in me wanted to call BS. Does she expect rape culture to grind to a halt if more chicks just stuck to whispering sweet nothings for big bucks? Or is she just thinking about obvious trainwrecks like Meghan Trainor?

I wring this all out, because Rebecca Taylor’s first foray as Self Esteem stomps that article’s argument into dust. I know, I should have led with something about Slow Club, the singer’s other band, and the mercurial rise of that. But this has been eating at me for a while: anyone who separates empowerment from pleasure obviously has never had a problem with feeling empowered. Taylor started this project as a means of self-validation, as opening skit ‘Feelings’ explains: “when you’re in a band, everyone doesn’t want the same thing”. With Compliments Please, Taylor reclaims the path that the industry had laid out for a pretty girl in an indie band - and she proves, with ample sauciness and class, that strong independent women aren’t just riding trends to cash out. This is metaphorical gold.

You remember that old legend about The Monks, about how someone told them to replace all instances of love with hate? Taylor essentially gives herself the same exercise - which leads to genius bops like ‘Monster’, where the big glorious chorus echoes the old-school sass of Destiny’s Child’: ”Nobody can hurt me quite like you... give me half a chance, I’ll hurt you too”. Even though Self Esteem is Taylor’s baby, she often gives the impression of leading a gang, as a cornucopia of voices respond to her own - so while Sia-like dramas like ‘Favourite Problem’ detail the incomplete fissure of one relationship, the story feels more universal with so many companions in tow.

In that light, Compliments Please doesn’t strive for any nebulous ‘political message’. It’s just a simple matter of representation: Taylor wrestled for independence, and so she’s written songs like footprints that listeners can follow. ‘Peach You Had To Pick’ and ‘In Time’ present two lyrical variations on the refrain of “fuck off and find someone else”; both address splits from domineering or obsessive boyfriends, but they could also describe a male gatekeeper in the industry. The sinister gospel of the former hits the nail on the head: “call me hard work to keep me down / but I cannot be silenced now”. If you doubt that promoters and the like would reduce the women on their roster to sweet, disposable flesh - well, have you read the news about Ryan Adams lately?

Now, I don’t want to drown this review in analysis. We haven’t even touched on the total command that Taylor has over those big diva moments in the album; or the perfect lacy cherry icing that the violins add; or the incredibly balanced pace between slow-burning ballads and Beyoncé-worthy bangers; or just the salacious rhythm on tunes like ‘Rollout’ or ‘Wrestling’. Granted, Taylor knows that she’s a white chick borrowing tricks from folks of colour, and she doesn’t shirk from that; the skits in between feature the monologues of black men and women, which in turn reflect back to Taylor’s own narrative of seeking and carving out independence. Is that equalising two struggles that may not necessarily be equal? Or are these skits free-standing parts to a well-intentioned, all-inclusive tribute? I’d like to give it to the latter.

At any rate, I digress. The point I want to hammer in is that Compliments Please delights me more and more with each spin - in part because the tunes are solid, but but also because the heart and the intentions underneath are solid, too. Pop artists don’t have to stick to the same ol’ lovesick schmooze to land a hit, damn it. If we can rewire girls’ heads to value independence and their own ambition with a flourish of sassy strings, then I say let’s hijack the radio and get this party started.

Jim Jones And The Righteous Mind