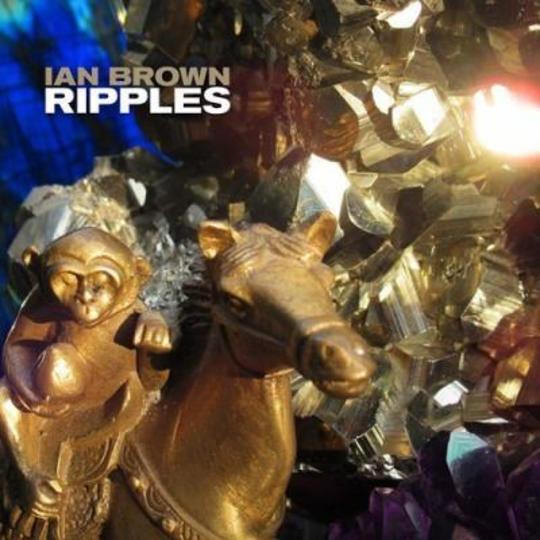 Ian Brown’s career trajectory has been one of fighting back. Back in 1998 when the embers of The Stone Roses’ car-crash disbandment were still smouldering, expectations for his solo career were set staggeringly low for a lead singer who transfixed, captivated and inspired millions during the band’s zenith. Against these unlikely odds, his debut solo album Unfinished Monkey Business was a ramshackle and fascinating triumph – bristling with ideas and glistening with confidence. Follow-up Golden Greats was even better – slinky, shimmering and gloriously funky. Since then however, Brown has tended to fall into a formulaic, though still intriguing pattern of loping beats and home-spun wisdom that often seems to tread overly familiar ground, studded with the odd sparkling single to hold the interest.

Ripples – his first album of new material in nine years, and fresh on the tail of his former band’s glorious comeback shows – struggles to assert itself in that it presents as a curious, inconsistent and overly lightweight beast – attempting to straddle Brown’s well-known love of dub and reggae but holding little of the social and musical weight that these genres typically carry, and far too-often weighted down by cliched and tired lyrical themes.

First, the positives. For a man often (unfairly) maligned for his voice, Brown has never sounded better. His singing is strong, confident and enrichened by age. He speaks with the air and confidence of a soothsayer, though too often the words delivered fall flat (more later). But he does sound great; matured thickly with time. As do his band – burbling, inventive bass lines and dub-inflected grooves sit thick and heavy with scratchings of treble-heavy guitar bisecting the layers. In particular, the bass work is particularly admirable here and helps to hold the record together. And when it all comes together on tracks such as ‘The Dreamer and the Dream’ with its tautly-strung dub-mix atmospherics, the sound is intoxicating and rewarding. Similarly, the descending meteorological patterns of ‘Blue Sky Day’ and the fine cover of Barrington Levy’s ‘Black Roses’ surrounded by doomy, distorted fog are charged and inventive. The title track itself is arguably the album’s highlight - the stuttering UNKLE-inflected breakbeats, razor-wire guitar and staccato clavinet stabs, rolling and tumbling to showcasing Brown’s rhythmic and percussive nous.

Outside of that, there is disappointingly little to inspire or celebrate here. It’s not to say that there is anything especially bad here, it’s just that there is so much that is simultaneously trying, flimsy and irritatingly repetitive. The choice of opening track ‘First World Problems’ as a lead single is a baffling one, given that it spends the best part of five minutes stretching out a single loping groove with endless lyrical repetition, to the point where you genuinely begin to wonder whether the track is skipping. It is only after three-and-a-half minutes that there is any hint of a direction change and when it does come, it falls short of any significant dramatic impact. The same is true of the closing cover of Mikey Dread’s ‘Break Down the Walls’. The sway and the stripped-back timbre are effective and Brown’s vocal suits the arrangement perfectly, but it proves too insufficient and repetitive to justify its running time. It’s not that songs necessarily have to provide changes or dramatic middle-eights. For example, Dread’s original is structurally similar but has enough layers, tweaks and subtle dub shifts to continue delighting. Ultimately, a song needs to keep attention and engage sufficiently if it wishes to justify its existence. Too often here, this minimum threshold proves beyond capable reach.

‘Raining Diamonds’ is another example of where a firmer hand was needed on the quality control tiller, being little more than a series of clichéd, aimless paradise-snapshot images (pelicans, palm trees, red setting suns and suchlike) with little depth, exploration or emotional resonance, as is the over-wrought and over-thought ‘Breathe and Breathe Easy’. Possibly worst of all is ‘From Chaos to Harmony’ which spends four minutes turning back aimlessly on itself, never threatening to take any degree of flight and featuring a series of deeply misjudged melisma acapella sections. However, it’s the Reddit-thread anti-establishment-by-numbers lyrics that truly grate. Sporadic references to “chemtrails”, “hidden symbols in plain sight” and “distraction by design” lurk around every corner but carry little gravitas or intellectual heft, except for repeating the flaccid mantra (last heard on Second Coming’s ‘Breaking into Heaven’) that “the kingdom’s all inside”. It’s not so much the fact that Brown mentions these things – few would argue that the current worldwide political climate needs viewing with a deep sense of cynicism - it’s more the lack of any exploration and the context in which it arises (often in the middle of some other narrative strand) renders such remarks distracting and wearyingly lecturing as the album progresses. One of the reasons that hip-hop remains a vital force for social change is that it allows definition, progression and dissection of social and cultural themes. In contrast, empty platitudes and trite soundbites not only fall flat, but actually serve to detract from the well-intentioned message.

The thrilling thing with having witnessing the progression of Brown’s career over the last two decades was to see his epic comeback - to see a wounded, bludgeoned fighter come out swinging and utterly define himself again on his own terms – releasing excellent records, taking a bloody-minded approach to not play Stone Roses songs live until he had established himself with his own name, and eventually scaling the heights of The Stone Roses wondrous, life-affirming reunion shows – finally delivering on the promise of the band and healing the hurt after so many years. In contrast to this Raging Bull-esque journey, Ripples simply sits as a passing footnote. There is no question of Ian Brown’s talent and ability to release great music, but the overall feel here is of the fighting spirit lacking and too much of the swagger being anonymously phoned in. It is not a terrible record by any means, and in its better moments it promises that there is fertile ground for Brown to sow in the future. And given his history and the understandable endearment towards him from so many corners, few would begrudge him the opportunity to relax into his comfort zone, especially when you read that the record is a family affair with his sons playing on, and co-writing the material. But ultimately, any record needs to be judged on its content. And Ripples is a record which will likely struggle have any relevance, impact or longevity beyond the goodwill of its own gestation. Which really is a shame.