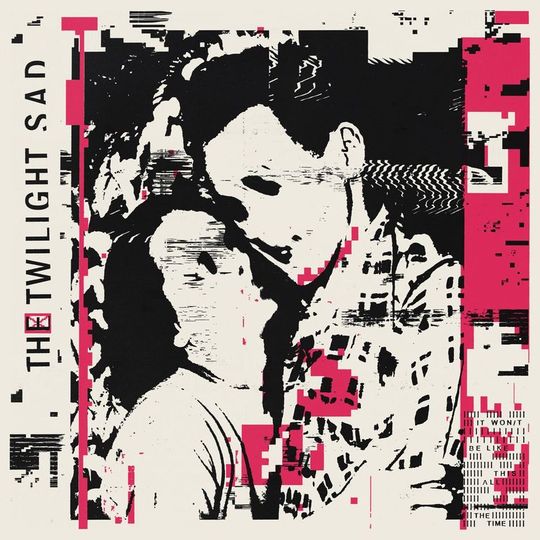 As good as The Twilight Sad’s last record was, it occasionally felt like a concession. A singular path of progression by subtraction had resulted in the cavernous frostbite agony of 2012’s No One Can Ever Know, and the world flinched. Despite being at their artistic peak, there was no comfort in its contents, no warmth in its expression. Purposefully aligned with tombstones like The Holy Bible and Closer, if the lurking horror within was a true representation of its creators’ state of mind, we all should’ve said something.

Nobody Wants To Be Here And Nobody Wants To Leave crawled towards the light; the motorik creep replaced with a commitment to survival in the face of adversity. However, its deserved success was offset by a nagging feeling that something had been lost. For a band that built its reputation on ferocity (of both emotion and volume), there was a blanket over the sharp edges and a muted undercurrent to the whole collection.

It Won/T Be Like This All The Time arrives in the wake of dramatic change. Drummer Mark Devine departed at the start of 2018, leaving James Graham and Andy MacFarlane as the remaining original members. They ended their decade-plus relationship with Fat Cat Records and decanted to Mogwai’s Rock Action. The world lost Scott Hutchison, but The Twilight Sad lost their best friend. Watch the battered catharsis of ‘Keep Yourself Warm’ at Primavera and try to stay intact. Its vulnerability, pain and desperate celebration are so enduringly human that it’s impossible to look away.

The tone for this new LP is set immediately by ‘[10 Good Reasons For Modern Drugs]’ and a broken electronic warble panning from left to right. Graham’s voice arrives and then disappears, cut into fragments and offered up as texture for the instrumental. It’s fast, colourful and distinctly apart from the band’s back catalogue, but the aggression and vigour that faded with Nobody Wants To Be Here… has returned. Graham has grown immeasurably as both vocalist and frontman over the last few years – where he would once prowl the stage, curled like Nosferatu and forever at 90 degrees to the audience, he now stares them down, arms outstretched and sacrificial. When he howls “I see the cracks all start to show”, it’s as much statement of intent as acknowledgment of weakness.

Graham prefaced this album in interviews by expressing a desire to be less cryptic. His lyrics were always frantic sketches of moments, hinting at a nameless terror happening somewhere off the page but never approaching explanation. Facets of that remain here, but it’s clear where his focus lies: loss, fear of abandonment, the crutch of alcohol and, crucially, love. Questions surface incessantly, rooted in anxiety:

“Would you throw me out into the cold?”

“Why did you leave in the night?

“Is it still me that you love?”

“Why can’t you remember me?”

“Why do you do this to yourself?”

The record’s ambiguous title holds the album together as a singular body of work; that no matter the impact or consequence, all moments are both worthy and fleeting. ‘VTr’s key lyric, “there’s no love too small”, is wholly representative of this outlook and an essential broadening of the palette.

While there are clusters of victory and hope scattered within, you definitely have to work for them. ‘I’m Not Here [missing face]’ tries in vain to hide its self-disgust, while even that declaration of love in ‘VTr’ is followed by “I won’t be surprised if it kills us all”. Most unsettling is ‘Girl Chewing Gum’, its stark threat of suicide riding the same industrial clank and churn as No One…’s ‘Dead City’. It’s a genuinely upsetting listen, made more uncomfortable by the shrug with which Graham delivers his lines and the way it sounds just so triumphant and satisfied by the end.

Musically, this is the most open The Twilight Sad have ever been. A discipline of Kevin Shields, MacFarlane’s guitar playing has now evolved like Spirited Away’s No Face to swallow every other instrument he encounters. At various points he apes keyboards, strings and synths, mimicking their output in twisted, feedback-drenched form. His playing is swirling and expressive throughout, but he also allows himself to break into clear, thick chords on ‘Shooting Dennis Hopper Shooting’ and gentle Disintegration arpeggios on ‘The Arbor’.

Newly-minted full members Brendan Smith and Johnny Docherty contributed to the writing process, adding new depth along the way. The decision to sparingly nibble at the vocal parts with digital manipulation feels vital, re-integrating singer and backdrop. ‘Keep It All To Myself’ finds them totally in sync, Graham sitting in the pocket of a big Novoselic bassline and rising with his bandmates as the music builds. Final track ‘Videograms’ pulls the opposite trick and thrives on tension without resolution, imperceptibly coiling itself around you with its beautiful Joy Division shiver.

This is a muscular collection, informed by Sad cheerleaders The Cure and Mogwai but also edging closer to Forget the Night Ahead and No One Can Ever Know; an avalanche of ideas and excitement built to carry multiple tours. The overriding sense is that this is how the band was always meant to sound. It’s a determined, seductive experience, brimming with belief and completely torching everything they’ve done before. As of now, The Twilight Sad are basically untouchable.