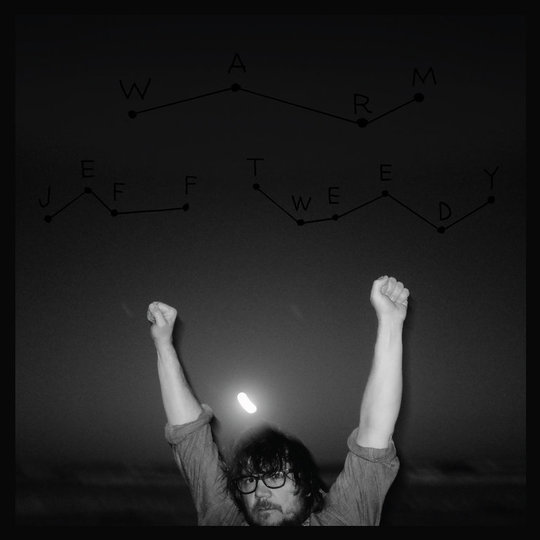 Wilco never seemed like they were meant to be a big band. Conflict, turmoil and adversity aside, Jeff Tweedy’s songwriting was just too unassuming for the pretensions of fame. Album after album built around his hushed melodies and simple chord progressions; the honesty and dedication to drawing emotion out of every moment nonetheless brought genuine cult status, subsequent fame and ultimately Grammy recognition. But where Tweedy’s songwriting formed the bones, the creativity and tightness (despite the changes) of Wilco the band always shone through the music; whether in the strange and jarring song structures of Yankee Hotel Foxtrot, the wanderings of Summerteeth or the Jazzmaster magic of the post-Nels Cline era, simple songs were made wonderfully eclectic. This is where Warm comes into its own as Tweedy, now alone with his songs, makes himself more vulnerable than ever.

It’s a record that feels appropriate in its timing, a musical partner to Let’s Go (So We Can Get Back), Tweedy’s autobiography released earlier this month that lays bare his battle with addiction and depression. His first solo album of entirely new material that follows on the heels of last year’s solo acoustic collection of Wilco staples, Together at Last. These are 11 sincerely personal songs of pain and healing. The ghosts of his diverse songwriting past are well and truly still on the haunt - these are unmistakable Tweedy songs - but are far from Wilco songs as the minimal instrumentation around his croaked voice and gentle strums ensure the honesty is what remains. From the restrained strummed chords and slide guitar that carefully prop up opener ‘Bombs Above’ to the jangling ironic gospel of ‘Let’s Go Rain’, front and centre are Tweedy and his words with nary a squealing guitar solo or fuzzed out feedback session in sight.

For what else would we be here for but Tweedy’s words? His brutal honesty woven into clever wordplay and murky metaphors. He draws constant parallels between his personal struggles and the global struggles of our current times. ‘Bombs Above’ is candid in its admission of privileged guilt in the travails of the poor and war-torn, Tweedy battling with the relative personal struggles of people across the world. “I’ve lost my way”, he sings, “but it’s hard to say what I’ve been through should matter to you”, having admitted the part he’s played in “the bombs above the ones you love”. The interconnectedness of humans and their suffering is hard on his mind, a theme continued as he asks “is it my fault the countrysides are so full of suicide?” on ‘Some Birds’ before returning to the harsh truths he’s laid bare on the likes of ‘Via Chicago’ and ‘Misunderstood’ with his refrain, “I’d love to take you down and leave you there”.

These are ultimately, however, personal stories that are elevated by their universal nature. ‘Let’s Go Rain’ plays out like any Sunday School song we may have sung as kids, but the story of Noah’s flood finds a fair dose of Tweedy’s ironic sense of humour. “Once upon a time I was a Christian, I didn’t know I didn’t need to know,” he sings before calling for more rain, destruction as an “act of love”. Dual personalities battle as a twin in the mirror makes several cameos, while the soft and ponderous strum of ‘How Hard It Is For A Desert To Die’ and ‘Having Been Is No Way To Be’ provide some of the best moments, the beautiful lines of their titles expanded with the gentle sincerity of lines like “hearing your laugh in my laughter” and “when I watch you sleep I wonder how much freedom we can dream, how much freedom we need.” It’s a record full of small wisdoms and it’s these moments that make you realise why Wilco garnered the fame they did. There’s an honesty to the words that shines in the work of Warm as well; something that settles in our chests and invokes memories and thoughts we never thought we needed to confront. It plays into what makes us all human, the beauty in the diversity of our shared experiences. As Tweedy puts it so well in his opening song, “suffering is the same for everyone, he was right but I was wrong to agree.”