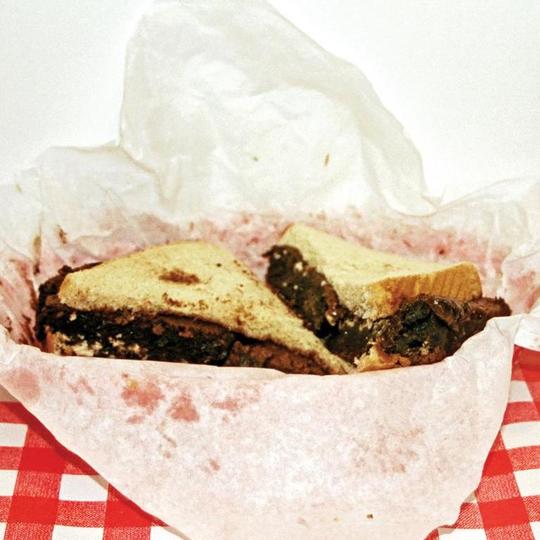 As indie rock’s resident wunderkind, Ty Segall continues to release music at an alarming clip, barely allowing time for the masses to exhale between the onset of new projects. But the appropriately titled Fudge Sandwich is sort of a curious outlier, one that promises a mystifying and eclectic tapestry of both reworked and reimagined songs, ranging from John Lennon and Neil Young to Funkadelic and The Grateful Dead. Flourishing in the manic-minded Segall fold, the project aims to be much more than a conventional scattershot of covers however - one that seeks to dramatically overhaul each iteration down to every rollicking contour so that the original bares at best slight, passing traces of minuscule resemblance. As the project’s press release contends, ‘these aren’t just cover versions. Cover versions happen at weddings and high school band battles. The songs here are what happens when someone loves a song so much, they need to get inside it and let it propagate and transform into what it would have been if they had actually written it.’

The gimlet-eyed Segall first stimulated the burgeoning public earlier this year with February’s Freedom’s Goblin, his most audacious, footloose, and with a running time of 75 minutes, his longest offering to date. Fudge Sandwich, which mostly spans the golden epoch ofSixties and Seventies rock, is brief yet sprawling. Lennon’s vehement and barbarous ‘Isolation’ ushers in a heady rush on first dose, ripe fodder for Segall’s menacing brand of garage rock, suffusing distorted guitar with trembling vocals that drip with an exacerbated, aggrieved pathos. With an influx of truculent-sounding drums, Funkadelic’s ubiquitous ‘Hit It And Quit It’ is refashioned as a mercurial prog-rock anthem, with Segall blatantly reaping moments of unadulterated joy in the volatile wreckage he leaves behind.

Unlike most humdrum albums of covers, there seems to be a pervading sense of cohesion binding the music together - if not necessarily in narrative continuity, then in thematic ebb and flow. The clever tactician that he is, the Californian doesn’t seem to be merely picking tunes at random, and the selected tracks recall lingering themes already extant in the Segall universe. Neil Diamond’s ‘The Loner’, which has been re-wrought countless times over its 50 year existence, nicely reflects Segall’s treasured 2011 ‘So Alone’, with its themes of self-induced exile and well-meaning self-subterfuge. Furthermore, the atonal and Paean bent of ‘Low Rider’ is in anamnesis of Segall favourite ‘Breaking A Guitar’, from his eponymous 2017 LP. As a collection of well-trod leitmotifs, Fudge Sandwich functions more as further folklore in the Segall autobiography than a mere cursory look at the tracklist would suggest.

In light of his ascendance atop the indie rock pantheon, Segall typically abounds in the mundane, recondite concerns of the everyman, as most of the offerings on Fudge Sandwich serve to illuminate. But his exegesis of Rudimentary Peni’s 1983 ‘Rotten To the Core’, originally penned as a diatribe against popular rockers of the day such as The Sex Pistols and The Clash, takes on new meaning here, especially against the backdrop of Segall’s own personal views of the music industry at large routinely gaslighting insipid acts while turning a blind eye to the creatively trailblazing and off-kilter. His attention drifts to more global concerns with a rekindling of The Dil’s obscure masterpiece ‘Class War’. With its increasingly germane topicality in a heavily polarised political climate, Segall revels in the somewhat subdued, poppy morass. There is a palpable frisson in witnessing Segall address overarching concerns of the cultural populace while electing to interbreed his typical distortion with more melodic instrumentation.

Arguably the most engrossing moment of Fudge Sandwich comes in the form of a fiercely animated, cavorting reworking of Spencer Davis Group’s ‘I’m a Man’. Unlike most of the other offerings, the rendition carries much of the lively guitar-invoked sheen and vocalised brunt of the original. But for all of his seeming artistic invincibility, occasionally some songs fail to rival the splendour of the others and just hover in the abyss rather aimlessly, like his brusque and sprightly cover of Amon Duul’s ‘Archangel Thunderbird’. But these missteps are rare indeed, and when pitted against outings like Sparks’ “Slowboat,” songs that seem in retrospect auspiciously destined for the Segall treatment, they are easy to forgive. As Segall’s original recordings continue to evolve and undulate alternating experimentation, it’s a fascinating treat and respite for fans to hear the sonic phenomenon charter the path of admired predecessors in his wake.