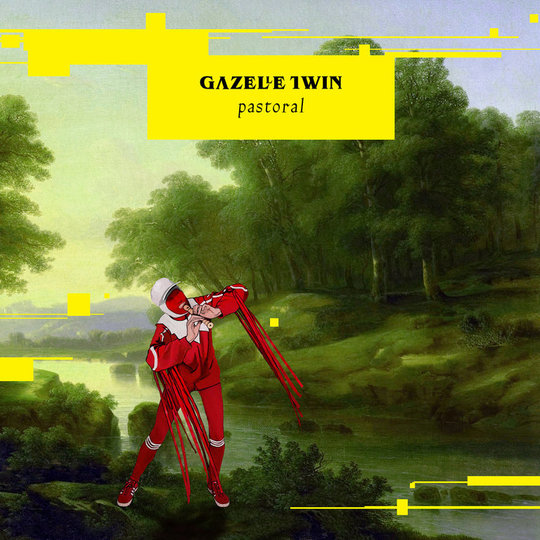 Gazelle Twin, aka Elizabeth Bernholz, has returned with what could be described as the first comprehensive and fully-developed Brexit album. The acute body horror of 2014’s Unflesh makes way for a public panic and terror right at the soul of a nation. It’s arguable as to whether the increase in highly visible xenophobia and racism that has revealed itself in the wake of the referendum was a result of just that, or had secretly been bubbling underneath a facade of harmonious multiculturalism. Either way, with Pastoral Bernholz, excavates beneath the superficial lush turf of England’s green and pleasant land to reveal an angry mix of ancient and contemporary pus-filled sores.

Bernholz really sets out her stall with the second track on the record. Musically ‘Better in My Day’ develops the harsh electronic edges that she explored on Unflesh with a punishing beat that backs our first character’s sneer. It’s unrelenting rhythms feel like the sonic equivalent of an anxiety attack that builds from the first taunting laugh of our narrator; a creepy twisted character, the kind warped by the Daily Mail’s big sell. Her distorted vocal barks “Just look at these kids now/no respect.” Respect? For baby boomers who had their cake and ate it leaving the next generation without the slightest possibility in many cases of earning the means for a pot to piss in or a window to throw it out of you might ask? Indeed. Not a great deal it as it stands. Evidently, the yearning the character feels for better days is built on a dark history and misplaced patriotism. It is a desperately sad folly, less jam and Jerusalem than a bitter lament for a fictitious Albion.

From the sixteenth century Enclosure to the present day, our green and pleasant countryside has become a manufactured version of its natural state and the cause of contention at best, and immense suffering at worst. Rather than celebrate the truly wild Scottish highlands or Devon’s rugged moors, nationalism is built on a view of neat hedgerows, lush green fields and their echoes of feudalism. It’s a dichotomy that Bernholz understands all too well, and one that she reflects musically through the use of brutal electronics and instruments that have their origins in earlier periods of our history. Alongside the harpsichord, that old school favourite the recorder is prevalent throughout. It acts as a symbol of innocent times butted up against the dark, satanic electronics brilliantly underpinning the polarity between urban environments and the so-called rural idyll. The tension between the two has existed for aeons and has in recent times been propagated by an anti-immigration stance and fear of multiculturalism.

Equally, 'Dieu Et Mon Droit' could be seen as a reference to the age-old bone of contention that is class, taken as it is from the monarch’s motto (meaning ‘God and my right’). But that said, you can make of it what you will, which goes for the entire record. Despite the title, Pastoral isn’t Bernholz’s sermon on the state of the nation, but more like an exposé. She deftly reveals the right’s crude and empty convictions and delivery by merely aping their tired discourse: “Stick it to the man/ wave those flags wave those flags,” and thus supplying a sneering attack.

A new record has also meant a new character for Bernholz to play with and explore the themes on her latest record. The Red Imp wears a costume rich with symbolism evoking everything from the St George's Cross and Morris dancing to a court jester sporting Adidas Gazelles. It jeers at you from the lush green landscape of the front cover of the record extending the thematic thread of the album and making it utterly complete. Still, the impish nature of her assumed persona doesn’t act as a barrier to compassion, and often exasperation, at the absolute state of things. On ‘Mongrel' she asks: “What species is this/what century?” highlighting many of our woes are founded on repeating historical ills that are a counter to progress. And she acknowledges the fatigue that comes with such a long, hard, and depressing fight: “I'm too tired to protest this, but I’m too worried I’ll regret this.” Finally, Bernholz appears to answer William Blake’s promise - “Bring me my chariot of fire/I will not cease from Mental Fight” - across the centuries with the pledge: “I’m not ready to forget this, and I’m not ready to accept this.”

Sadly, given her reputation as an avant-garde artist, it’s likely that the album’s reach will land on the ears of the already converted. We can only hope this essential work reaches as large and as varied an audience as it deserves. Pastoral is a towering work that truly distils all of its maker's talents into a unified whole. It runs deeper than being merely being just a response to Brexit. Its a braver album than that, one that can face horror in hope for better times, one of innocence and experience.