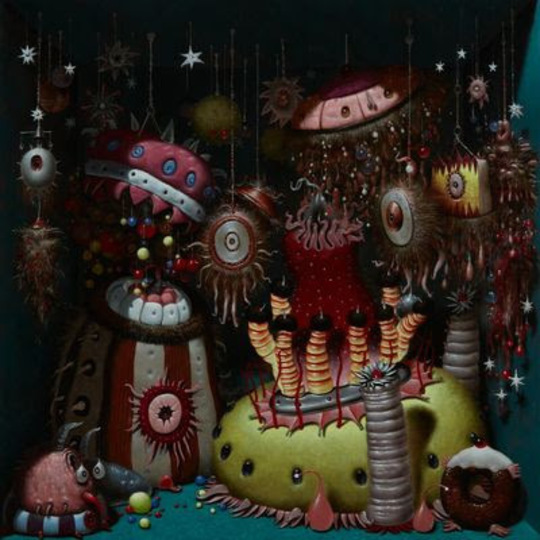 I’ve said it before, but damn – I’ll never stop saying it over and over – it’s the duty of the artist to act as a mirror when societal times get tough. Furthermore, there’s something important that happens to the function of music when we’re united against a greater evil. No longer an avenue for those of us to exhume our greatest fears – with the world going to shit it’s the job of musicians to unite, show-up, and stand up against the great evils. So, it makes sense, then, that a band with the sway of Orbital might dig up their latest offering and smack you across the face with the obviousness of their title, Monsters Exist.

It’s a bold choice, to be sure, but the right one. To carry the crown of kings of electronica is no small feat – and a title with which comes this great, tarot-deck like reflection of what has become normality.

The title track, our opener – aches with a Blade Runner style sense of dystopia. Listen to it as I first encountered it in the pouring rain, and you’ll suddenly find you transport into a future not as far in the future as the original film would predict. Run in a thick rain-storm, eyeing up everyone you meet – are you a replicant or a human? Gosh, how would I know anyway??

‘Hoo Hoo Ha Ha’, our number two - bounces along like a video-game acid trip. We boing our way along an easy opener level, with the pounding, repetitive electronic joy-beat behind us. We hit every prize box along the way, with breaks for thinner, absurd but euphoric electronic breaks – highlighting that maybe in these monsters that do exist lies absurdity.

If you’re looking for a sign that this album might be a mirror to the world – like a really, obvious sign, it’s not long till Orbital provide. Track three sets our intention, with a stark soundbite “Do you know the price you’re paying for this sort of thing?”. Titled ‘The Raid’, here we see reflected the undercurrent of darkness in our track-two, joyous video-game world. It calls us to arms, darkly so – assembling the troops that believe in the monsters and want to stop them.

‘P.H.U.K’ is our track four – and restores us back to the track two video game bounce. Our beat drives forward with the absurdity of before, but it’s no longer dark – enhanced with willowy synths that raise the hearts and minds of this newly assembled army. It brings our BPM to the quickest so far on the album and is certain to raise a bop-along no matter where you are (fight me, if you don’t).

In ‘Tiny Foldable Cities’, we collapse our fired-up army into the fight against the monsters that do exist. It’s marching music, as much as home on the electronic floor of Slimelight as it will be mantra-music to walk too for our army. The track flirts with elements from all prior songs, and thus hits a high - we’re pulled through the next two tracks ‘Buried Deep Within’ and ‘Vision OnE’ at breakneck battle speed.

When the battle is over, we drift back into ‘The End is Nigh’. A pace change for the album, it’s an almost-erotic set of pants and moans set over music you could match with your hips. Is this, we think, the universe giving birth to the new age? The creation, after destruction. I guess only those monsters will know. Or great scientific thinkers. Hold that thought, because we might be about to encounter one in a few moments…