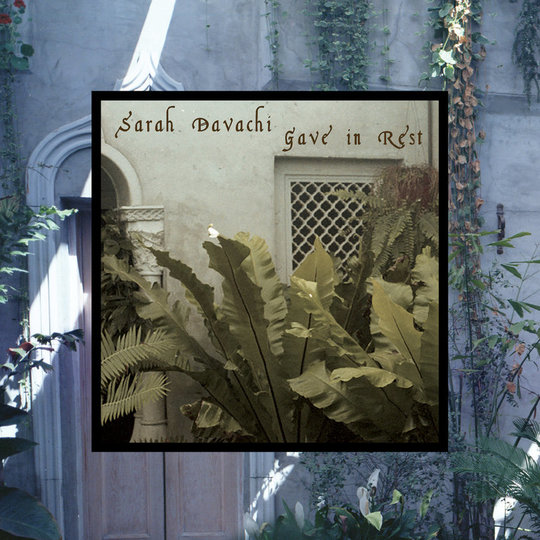 Sarah Davachi’s ninth record in five years, Gave in Rest, arrives just when the Canadian minimalist is on the cusp of breaking into a new tier of recognition. April’s Let Night Come on Bells End the Day was a work of sombre drone beauty, whilst last year’s All My Circles Run established her as an artist willing to break away from the synthesizer to explore the warm potential of acoustic instrumentation.

Gave in Rest reflects Davachi’s interest in medieval and Renaissance period musics. Inspired by travels around Europe last summer, the record provides sonic reminiscences of the composer’s quiet explorations of continental churches. ‘I became engaged in private practices of rest and rumination, almost to the point of ritual’, she explains in the record’s press release. To compose Gave in Rest she largely sat alone at the piano, searching for tones and themes that could then be explored in more depth later on. Sometimes this exploration took place solo (‘Waking’ is the sound of Davachi alone at the Hammond organ), but it also involved bringing in other musicians to further investigate the depths of the existing harmonic templates.

The resulting seven tracks (roughly three-quarters of an hour in total length) build on what Davachi has produced before. The atmosphere remains subtly melancholic. The sonic approach continues to be devoted to the exploration of sustaining notes and musical patterns. Nonetheless there is something distinct about Gave in Rest that marks it out from Davachi’s other recent efforts. Her records have always appeared to toy with the idea of space, looking to present on record the experience (to varying degrees) of listening to music within certain locations. On this album, this is brought to another level. One can sense the religious spaces in which Davachi spent much of the formative period behind Gave in Rest. ‘Evensong’, in particular, conjures up the strange communal solitude of spirituality, with its overdubbed chant-like vocals.

It would be over-simplistic to cast Gave in Rest as simply an album for being alone with. There is, however, an undeniable air of blissful inner peace that comes from absorption within it. This is music that captures the atmospherics of the early music with which Davachi has become increasingly fascinated: music that was often inherently spiritual in its compositional practice and intent. This album may not be the work of a religious individual, but it aptly communicates the sense of religious fervour that often resides within the act of composition, not to mention the act of listening.

Far from being just a gifted synthesiser experimenter, then, Sarah Davachi is increasingly establishing herself as a multi-faceted explorer of the many liminal terrains of minimalist music. Gave in Rest is a work of disarmingly simple, yet often extremely profound, beauty.