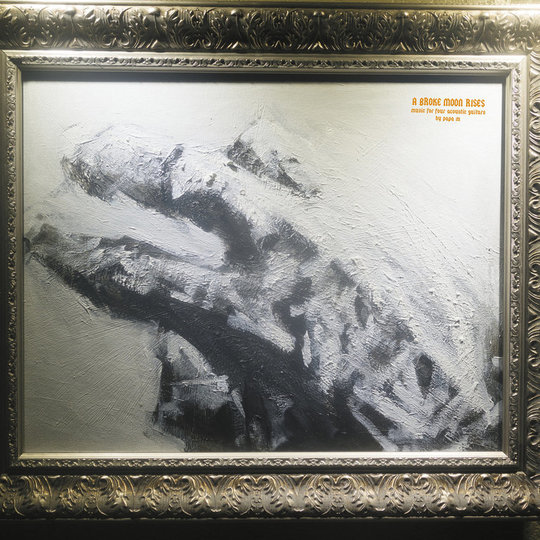 David Pajo is a pretty versatile guy – an understatement up there with ‘Converge can make a bit of a racket’ and ‘Joanna Newsom has a fairly distinctive voice”’. Although Pajo is probably still best known for being the guitarist in Slint (unless you’re a Corgan super-fan and you count his contribution to Zwan), he’s been releasing music across a range of different aliases and identities for decades and mastering his craft from confessional singer-songwriter albums to post rock, ambient and metal. Although Pajo has used the Papa M name to record songs featuring his own voice (most notably on Whatever, Mortal where Bonnie “Prince” Billy himself encouraged him to step up to the mike), A Broke Moon Rises sees Pajo return to letting his guitar speak entirely for him, and very eloquent it is as well.

Across the five tracks of A Broke Moon Rises, Pajo’s guitar speaks of his quiet sense of self-comforting and survival. The past few years have not been kind to him: he’s been dealing with the aftermath of a failed suicide attempt, a horrific motorcycle accident that left him in a wheelchair and his inability to tour due to a general lack of disabled stage access. You might imagine that a solo guitar album from someone coming through all of that would be a mournful affair, all minor chords and feedback squeals wringing out the pathos, but A Broke Moon Rises takes a totally different tone and is all the better for it. The overall impression of sitting with A Broke Moon Rises is one of music being created as a comfort blanket: Pajo weaving a warm, familiar and enveloping sound world in order to soothe himself. Fortunately, it’s a generously proportioned blanket that can cover the listener too.

As is often the case with instrumental music, the track titles have to do a little extra work to convey the intention of the music and they’re chosen with care on this LP. The third track’s title, ‘A Lighthouse Reverie’, is especially appropriate, not just for the track itself, but for the album as a whole. Each of the first four tracks start off very simply with a solitary guitar, which is then joined by another: they circle around each other, growing and building with some additional touches of bass and drums as momentum builds. In each case, the connotations of a lighthouse are evoked: solitary but also rather grand and splendid; illuminating and there to provide support and guidance. ‘Reverie’ is also especially appropriate as each track clearly comes from a meditative place and communicates this reverie effectively to the listener.

The fifth and final track is Pajo’s version of Arvo Part’s composition ‘Spiegel Im Spiegel’. The stately beauty of the piano and violin interaction in the original is replaced by Pajo’s solitary guitar and a muted synth. There is an extreme sense of fragility to the unadorned treble strings of Pajo’s guitar playing the piano line: it succeeds in taking a well-known piece and showing it in a new light. Pajo has apparently been fascinated by this composition for years and here has finally decided to do something about it by playing a version of it himself. In fact, the whole of A Broke Moon Rising feels like something created by Pajo primarily for himself: to use music to create something beautiful and calming. We are very fortunate that he’s recorded and released it so that we can all take a little shelter in this lighthouse that he built.