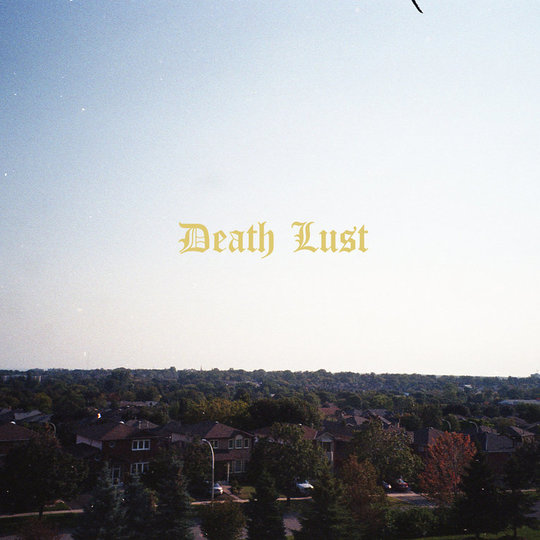 The first time I saw Chastity, I was blown away by the power and intensity of their performance. Lead singer, and the embodiment of the band, Brandon Williams set up his mic stand in the middle of the crowd and then proceeded to stalk about, and through it, selecting like-minded individuals to share a lyric with. Musically it felt like listening to a Faith No More from a parallel universe in which they followed a hardcore path instead of alt-rock/metal.

That was a few years ago, and since then, Williams, aka Chastity, has released a slew of flawless singles and EPs. Now he has unveiled debut album ‘Death Lust’. This is everything we were hoping for and more.

‘Children’ is the musical equivalent of a fire. A wall of feedbacking guitars and drums blaze and crackle brightly. After this cacophonous explosion has made its impact for a few bars, Williams’ sonorous vocals drift above it, like smoke wafting in a breeze above the firestorm below. As ‘Children’ continues, the searing guitar riffs fan the fire, until it’s a raging inferno. This is the perfect opening Death Lust needs. It says: Chastity are an unrelenting band. We will pummel you into submission. We have the riffs. We have the depth of sound, and we have the lyrics to match it.

‘Scary’ and ‘Heaven Hell Anywhere Else’ changes the script a bit, by adding an aching melancholy melody. Instead of a brutal assault on the senses, ‘Scary’ starts with gentle riff, that slowly builds momentum and intensity before that wall of sound kicks in. This is moment when Williams’ vocals really come into their own. “Were you born trouble, Or did your pa teach you rock and roll” and “Don't pick a war, Before you know, Who you're fighting for“. ‘Heaven Hell Anywhere Else’ featured a brooding riff that gradually builds with intensity but is juxtaposed with one of the catchiest choruses on the album. These songs show a more reflective side to Chastity. They are at the top of their game when wailing about the injustices in life, but they are also very, very good at gentle pointing out areas for improvement.

‘Suffer’ is one of the stand out tracks on the album. It has a real pop sheen to it that lends itself to Chastity’s ability to write a tune. As the riffs build up and the glorious sing-a-long chorus repeats and repeats you realise that Chasity are your new favourite band. 'Innocence' closes the album as it started, with incendiary guitars and snarling vocals. Once again, the riffs are catchy and massive. Williams’ vocal delivery has a clarity that that hitherto hinted at.

Everything that Williams hinted at on his early releases is on display here, but it sounds more abrasive, angry and epic. The riffs are heavier and more hypnotic, the production is denser and has less room to catch your breath. Lyrically Williams has channelled his inner angst, without ever sounding cliché. This is an album that demands repeat listens as Williams’ stories of isolation and inclusion don’t always show their full intentions after one play. ‘Chains’ on the face of it is a visceral beast of a song, but when you delve into its lyrical meaning and abrasive patterns is about getting to heaven and living there. Death Lust is the sound of a band who has had enough being put down, pushed around and generally told to conform to a society they never really wanted. It’s the sound of disaffected youth demanding to be listened to.