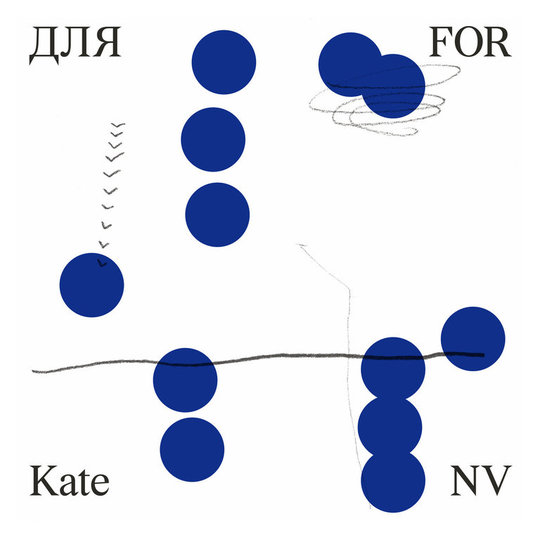 Muscovite artist Kate NV proved with her 2016 debut album Binasu that she is capable of conjuring upscale hybrid pop should-be-hits, positioning herself as one of the jostlers to keep an eye on for the next breakout star. With this follow-up, however, she retreats into a netherworld of amorphous, electronic filler, ruling herself out not just from crossover success but from most discerning interest.

для FOR is comprised of ten tracks, five from a springtime recording session and five from the autumn, lending a certain symmetry to proceedings. Both sessions were conducted at NV’s home and she herself has declared that she feels the music was written not by herself but by her chair. It could scarcely be a more credible claim.

Opener ‘yxo EAR’ (each track title is comprised of two three-letter words, one in Russian, the other English) neither bursts into life nor fosters a definable mood, a drifting set of modular synth stepping stones, whereas ‘дуб OAK’ is driven by a nodding, circular xylophone loop, nibbled at the edges by a creeping, ribbiting keyboard. In both cases, the tracks go nowhere, failing to successfully build, let alone successfully pay off.

NV’s live shows are a true spectacle, bursting with human drama and storytelling, building an arc that is disappointingly absent here. It is not just the pop songs that have disappeared, but the sense of definition. ‘как HOW’ offers some compositional variety and direction, but ultimately without any destination, something further compounded by the eerily similar track ‘зря SEE’ popping up later on, which satisfies the symmetry of the album but offers no further clarity. These are foetal scraps that are so infant that it is far too early to tell exactly what kind of songs they might have grown up to be.

There are moments of hope: ‘двA TWO’ features snatches of breathy human incantations sliced up and sequenced arrythmically over blocky, hard-outline beats, a shorter, zippier burst of energy that reminds us that NV has great music in her. ‘вас YOU’, meanwhile, is the only track with lyrics, setting a Wassily Kandinsky poem to song. It results in a blossoming of melody, something NV is fairly uninterested in exploring, which is fine, but whether by design or accident, it lends the track a welcome structure, something sorely missing elsewhere.

‘кто WHO’ brings proceedings to an end with processed synths manipulated to sound like birdsong, a generous morning chorus to wake us from our slumber. It serves as a reminder that in some cases, the most beautiful sounds can be very simple. One fears the rest of ‘для FOR’ was intended to carry the same message.