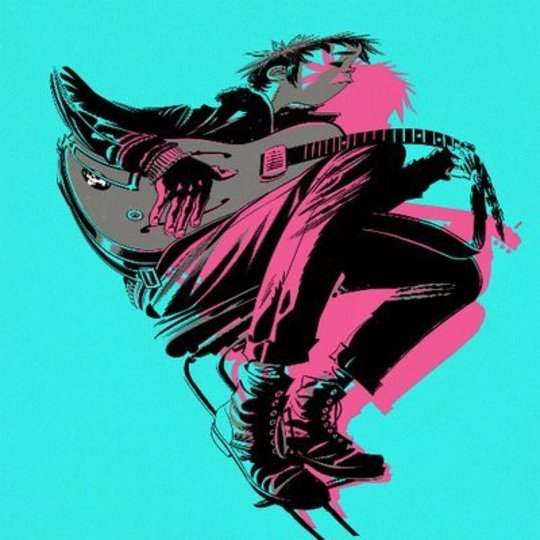 Gorillaz got a little bit out of hand on last year’s Humanz, the group’s star-studded and ultimately over-stuffed fifth album. Damon Albarn had been wrestling with what to do with the project for almost a decade since Demon Days and Plastic Beach turned it into an international success and creative tensions between him and co-creator Jamie Hewlett led to a public falling-out. His answer was to bring together a huge list of contemporary talent (Danny Brown, Kelela, Vince Staples etc) and force them awkwardly together. The resulting album was fun and energetic but scattered and inconsistent. With 16 credited guests on an album under 50 minutes, the voice that was most often lost in the mix was Albarn’s.

The bigger problem was how Humanz failed to answer the question that had dogged him since Plastic Beach and inspired his frustrated working relationship with Hewlett. If the group can change its cast of guests, its sound, and its lyrical concerns at will, what exactly makes something a Gorillaz album? As the visual element of the group has become less significant, Gorillaz now feel oddly faceless.

The debates that inspired the group are also no longer ground-breaking; no serious critic is concerned with the artifice of MTV anymore, nor are bands praised as revolutionaries for incorporating dub and hip-hop into their music. On Humanz, the commentary came from featured artists more often than it did from Albarn and the album came and went with a feeling that he didn’t really have much to contribute. It felt like a Gorillaz album in the same sense as a DJ Khaled record. It was one because it had their name on it, but the substance came from outside sources.

The Now Now may be an attempt to correct this problem, containing only three guests and a clear Albarn presence on every song. While its title suggests a comment on ‘infinite content’ and over-saturation, it’s also low on grand concepts. Instead, The Now Now is Gorillaz’ most introspective album yet, dealing with loneliness and ageing, and it is often hard to separate Albarn from the character of 2-D.

Its sound is a return to Plastic Beach with a breezy synth-pop style that contrasts nicely with Albarn’s dour lyrical concerns. On ‘Humility’, he bemoans his feelings of isolation over a summery George Benson guitar track. Later on, ‘Magic City’ has a Sixties girl group swing to it, as Albarn longs to return home, while ‘Tranz’, with a menacing synth groove fit for The Human League, sees him worrying about self-destruction – "When you get back on a Saturday night and your head is caving in / Do you look like me? do you feel like me? Do you turn into your effigy?"

However, while these songs are often good, they also lack the colour and experimental zeal of Gorillaz’ best work. Every Gorillaz album so far, regardless of its effectiveness, has been notable for its ambition. The Now Now lacks this. Only ‘Hollywood’ feels like a classic Gorillaz track, even it does contain a frustratingly by-numbers verse from Snoop Dogg. Elsewhere, the Eighties disco of ‘Lake Zurich’ is a valiant attempt to bring some life to the album’s downbeat second half, which ultimately spends too much time with competently-written but underwhelming ballads.

Albarn has said that the record was partly conceived so the band would have new material to play at their upcoming festival dates and in this sense, it works. These songs are decent additions to Gorillaz’ catalogue. However, The Now Now is a disappointingly minor album, low on standout songs and big ideas. It also does very little to advance the mythology of Gorillaz. In terms of the project’s narrative, it would have worked better as a 2-D solo album.

It may be overly critical to complain that The Now Now is merely a collection of decent songs but Gorillaz can be so much better than that. The group’s first three albums were one of the most effective and surprising left-turns by a British artist in pop history. It’s easy in hindsight to see why ‘Clint Eastwood’ and ‘Feel Good Inc’ were hits but it was never guaranteed that Albarn’s fans would welcome his move to dub and hip-hop. Even now, they stand out as some of the strangest hit singles of the 2000s. In comparison, The Now Now is an easy album to forget and one that lacks a sense of purpose. ![Please enter...][105681]