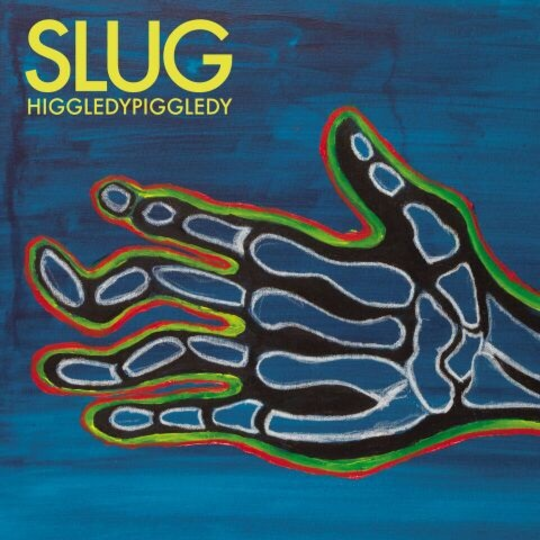 Ah, how funny was that back in the Nineties?

Our young(er) minds boggled at where the line might be drawn between heavy, moderate and totally acceptable pettage. And was it something that could only be carried out in a pool? To have that phrase swim back into our collective consciousness is no bad thing, although Slug’s early release single of teh same name does little to answer my teenage self’s questions. Present day me, however, was pretty happy with their new track. It’s a bolshy album opener, a crunchy, irreverent teaser for the main event. The unmistakable cheeky-dulcet tones of Ian Black draw up rippling memories of Ripe, an album from a younger, more carefree time.

But it’s 2018, we’ve lost Peter and David Brewis back to their Field Music ways, and now is the time for Black to take centre stage. He composed and produced all of HiggledyPiggledy, a steep learning curve no doubt, but one that that allowed him to develop his style and plum the previously untapped creative waters of what is being commonly described as his ‘new brand of Dada-rock’.

Not to be confused with rock band Dada, this is all about ridiculing the seeming meaninglessness of the modern world through the medium of music. Think early-twentieth century Dadaism, the art movement that rejected logic, reason, aestheticism and capitalist society as a reaction to the First World War.

But Ian Black’s reaction was to something a little closer to home: a Sunderland Wetherspoons, the banter from whence allegedly inspired many of his songs. Black’s stated aim was to 'have fun writing truly horrible lyrics, playing characters venting in pubs, writing in the character of how some people think and behave', and all with inspiration from The Residents, John Carpenter, and the soundtracks of Don Cherry and Masahiko Sato.

And the outcome? HiggledyPiggledy is a lot of fun. It rows through a patchwork of musical ideas and experiments with a sense of spontaneity and discovery. Take ‘Basic Aggression’, which is a joyous picnic of sounds on top of a hill (with the odd thunderstorm blowing through!). But it also has a feeling of being a little restrained. Like a puppy on an extendable lead, it’s always being pulled back in line just as something exciting is sniffed out.

There’s the Slug staples of solid rocky riffs and tongue in cheek lyrics. Tracks like ‘Gibberish’ and ‘Tongue’ have a sunny, funky vibe with the chunky guitaring all up in your face and the bass slithering around all cool and snaky underneath. But there’s a lot more going on too. From ‘Humming and Hawings’ flute’s trillful melodies to the mesmeric percussion in ‘Arbitrary Lessons in Custom’, to the off-kilter synth interlude ‘A Soft Shoe Number’, there’s a little bit of something for everyone.

And for the lyric-lovers out there, there’s also plenty going on thematically. Black explains ‘Arbitrary Lessons In Custom’ as being about “how we lose touch with people and friends we love and the slow burn of how it happens”. As Gertrude Stien said, “Before the Flowers of Friendship Faded Friendship Faded”. But Black says it nicely too.

One of my faves is ‘Petulia’, where the whimsical vocal harmonies are juxtaposed with nice heavy, driving rhythms. A bit like ‘You Don’t Need To Wake Up’, it’s got some real bite to it.

The latter is vaguely reminiscent of the music you’d get when you reach the final baddy in an 80s video game. And the abiding feeling is that you might not have won.

This is certainly an exciting album as a solo endeavour for Ian Black, and perhaps it’s just the restrained vocal style, but it feels like there’s an energy inside it that never quite gets unleashed. It’s got all the ingredients to fly but doesn’t quite take off. Perhaps it’s a grower. Or perhaps the real joy of Slug comes in their live gigs, which, if past performances are anything to go by, will be a mix of outstanding musicianship, comedy interludes and an overwhelmingly uplifting shared experience. Slug at their very best are a live band, so I’ll take this album as a warm-up.