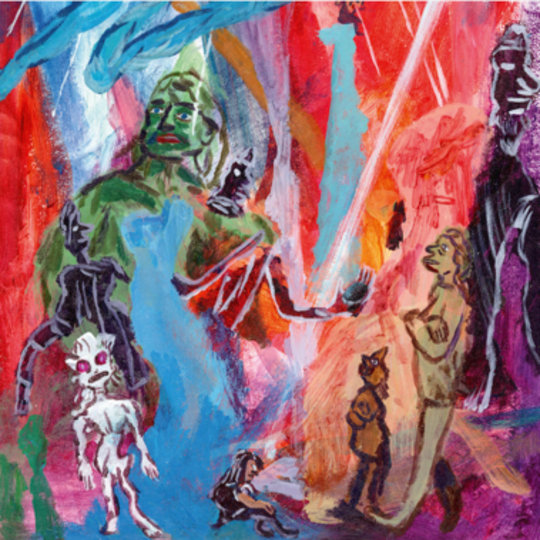 Hailing from South London with a moniker inspired by one of Bill Hicks' most controversial (some might say grotesque) characters, Goat Girl don't beat about the bush when it comes to making their intentions clear. Their self-titled debut might reference their native city in many ways, but this really is no Ray Davies or Damon Albarn affected homage. Goat Girl documents what it's like to be a young woman living in a downtrodden, debt ridden, post-Brexit capital where divisions by class, race and gender persist all too evidently.

Having formed three years ago after a chance meeting at Brixton's legendary Windmill venue, the four-piece have since emerged as one of the brightest hopes in the UK's supposedly dying guitar scene. Alongside the likes of Sorry, Good Bad Happy Sad and Shame, they're carrying a pos- Fat Whites torch for a musical underground reared on bitterness and fed up of the rigours imposed by another Tory government. So in retaliation, the four Goat Girls - Lottie (vocals & guitar), Ellie (guitar), Naima (bass) and Rosy (drums) - have spent their formative years constructing a bunch of songs borne out of frustration with their lot, yet not exclusive to their own backyard either. Songs many of us can relate to, and in turn created one of the most potent debuts this year.

Goat Girl might be 19 tracks long but don't let that put you off. At just 40 minutes in length it doesn't stick around long enough to incur tedium, and what's more, each of its consistent parts makes for an explosive whole that demands repeat listens. Recorded with the increasingly reputable Dan Carey in his Streatham based studio, Goat Girl represents another exquisite addition to a catalogue of work making him one of the most sought after producers in the business right now.

Although not a million miles from their live sound in many ways, the addition of an introduction that could double as a title sequence to a Stephen King thriller ('Salty Sounds') and four interlude segments including a spoken word monologue ('A Swamp Dogs Tale') and what sounds like the backdrop to a Seventies kitchen sink drama ('Hank's Theme') among them works wonders in this context. Creating its own little nether world around the bigger picture Goat Girl create through their observational diatribes that range from the obscene ('Creep') to the laconic ('I Don't Care (Parts 1 & 2)').

'Burn the Stake' pulls no punches with its lyrical snapshot of those in power and who put them there following a similar path to early b-side 'Scum' which tackled the notion of Brexit eighteen months earlier. Meanwhile, 'Creep' and its depiction of a "creep on the train with his dirty trousers stained" is scathing in delivery, the unwelcome attention of its subject sadly an all too unwelcome occurrence many females encounter every day.

Former singles 'Cracker Drool' and 'Country Sleaze' fit succinctly with the more reflective likes of 'Viper Fish' ("Don't shed a tear, please don't bear me of the shame") and 'Lay Down', which bears all the hallmarks of a lost Syd Barrett outtake. Not to mention current 45 'The Man', its tale of love and loss erupting in just over three minutes making it Goat Girl's most exhilarating outburst. Indeed, while there's an undoubted comparative link to the other, aforementioned bands from Goat Girl's neck of the woods, much of this record is reminiscent of Rhode Island indie rockers Throwing Muses and in particular their 1989 opus The Real Ramona. While others recall Surfer Rosa era Pixies, particularly the vitriolic 'Little Liar', a post-millennial transatlantic cousin to Frank Black and co's 'Bone Machine'.

Closing with a downbeat version of a song originally released as part of the 1976 movie 'Bugsy Malone'. 'Tomorrow' perhaps sums up Goat Girl's exasperation with their surroundings more than anything else on this record. Restrained almost to the point of giving up, there's an underlying optimism that suggests something better is just around the corner. And I guess no one can ask for anything more than that.