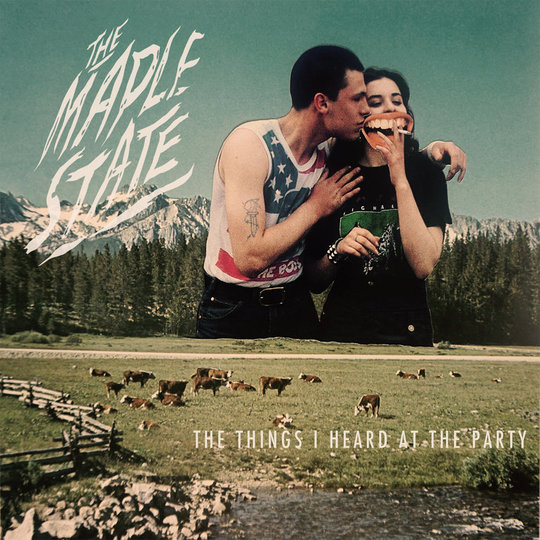 Things I Heard At The Party is the first full-length release by The Maple State, and shockingly, their first release since almost a decade ago. The excellently moody and emotionally tense Say, Scientist EP was released in 2008 and followed by an unspoken hiatus by the band, with all three members going on to pursue different paths. After reforming in late 2015, the band will hopefully make the impact they deserve.

Opening track, ‘The Things I Heard At The Party’ is based on a Hallowe’en party frontman Greg Counsell once attended in a Sloane Square penthouse. For those familiar with the Maple State’s earlier work, this could easily be described as ‘Say, Scientist’ part II, be it harder-nosed, but with the same cutting, outsider tone of voice as Counsell’s lyrics from the late Noughties. You’d be forgiven, however, for thinking you’d accidentally put on a record by the Courteeners.

Energetic ‘Something In The Water’ is an instant winner, and easily the most memorable at first listen. Infectious and visualising lyrics make this one of the best songs on the album. Another great song is ‘Africa’, a slow, unfurling song which slowly builds and builds with excellent instrumentation.

‘Cold Theatre II (Always You)’ continues the momentum from the start of the album, combining a fast tempo with just the right amount of sentimentality. The opening guitar sequence in ‘Winner’ is a delight to listen to, and the repetition of the lyrics serves as an intriguing tease; you’re absolutely desperate by the end to know what Counsell is talking about.

Melodically throughout Things I Heard At The Party the instrumentation is wrought with emotion and cleverly-considered composition. But at points, the tracklisting suffers from an identity crisis, with songs such as ‘Cannonball’ and ‘Not Enough’ failing to stick in the mind. Even after listening several times, there are a few songs that I found it hard to remember or recognise.

‘Deadline’ is a little preachy, I’m not sure about the spoken word vocals which feel a little laboured. But the album really excels on the final track, ‘The Motorbike and the Closest of Calls’, and somehow the spoken word element works better here. It really feels like the Maple State consciously saved the best for last, and the wistfully-delivered chorus is almost at festival-anthem level of iconic. It’s the pièce-de-resistance of the record, embodying the wry, surveying characteristic of the lyrics of the whole thing.

Despite their admission that they 'are not the bright young things that we were only yesterday', The Maple State really hit the mark here, and have made a record accessible to new fans, but accommodating the old. Ten years have changed the outlook and style of the three-piece, but not beyond recognition. Some of the tracks might be slower-burners, although a couple of them do feel like filler in comparison to the stronger tracks. These lead the way, but are more than sufficient to carry the album through.