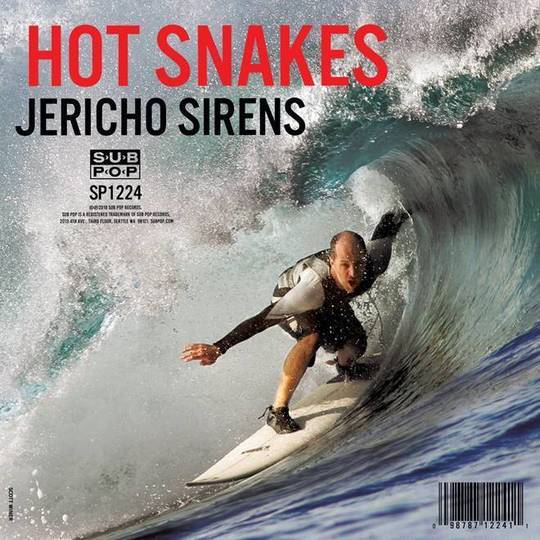 The next time someone says to you that 'guitar music is dead' just point them in the direction of Swami John Reis and Rick Froberg. Over the course of their partnership, in Pitchfork, in Drive Like Jehu, in Reis's other much-loved band Rocket From the Crypt, they have kept finding new ways to re-invent themselves while also remaining familiarly consistent. In Hot Snakes, the duo's longest running and most 'successful' venture, they completely dominated the early Noughties almost, it seems, just to prove they could. In their returning press statement, Reis (semi-)jokes about completely mastering the guitar and being begged by people to come back for more. Even if you weren't in on the joke and just listened to his a selection of songs from his muscular guitar, you'd be hard-pressed not only to take the statement seriously but also wholeheartedly agree with it.

Such was the excitement at the prospect of a new Hot Snakes album, teased as early as their 2011 reunion tour. Since then the two have also brought the aforementioned Drive Like Jehu and Rocket From the Crypt on the road, with much success, but no new music, until now. And honestly, it's as if the band haven't missed a beat. There's an argument to be made that Hot Snakes are one of those bands who got better with each record, partly as they only really did one thing - a cross between Wipers-esque post-punk and rock 'n' roll - but just got better and better at it with each passing record. And now, some 14 years later, here they are with their fourth record, Jericho Sirens and it like no time has passed at all. The only real difference now is that both of the band's previous drummers Jason Kourkounis and Mario Rubalcaba are now both in the band at the same time, otherwise, Hot Snakes are firing on all cylinders like they always have, always do.

So how to categorise this then? This is yet another example of Hot Snakes at the top of their game, except this time they gave 14 years in exile for other, lesser bands to catch up with them only to reclaim the throne with ease. From the off, we are immediately greeted with the band's abominable power in 'I Need a Doctor' which rips through the speakers and listeners ears much like the wave pictured on the album's artwork. From there, the unnerving 'Candid Cameras' ensures there will be no sitting comfortably here, with a disorientating rhythm that's hard to ever get to grips with until the climax (only 1:30 in!) showing their ability to write mini-masterpieces in a matter of minutes. Lead single 'Six Wave Hold-Down' steadies the ship, acting as the most pop-indebted track available here, just to remind everyone that talent is also well within their arsenal. Meanwhile, title track 'Jericho Sirens' slows things down considerably to a darker, heavier energy lest the whole record spins off the turntable out of sheer force.

But then, there is 'Death Camp Fantasy' which follows 'Suicide Invoice' and 'Audit in Progress' as a lineage of Hot Snakes tracks that sit in the middle of the record and transcend everything else around it. The song is only 2 and a half minutes long, and yet it manages to move so seamlessly, at such a ferocious pace, only guitarists as talented as Reis and Froberg could ever really manage it. The rest of side B almost a suffers a little from 'Death Camp Fantasy's prowess, but this remains an excellent record until the end. The only real surprise is that finale 'Death of a Sportsman' keeps things a little open-ended, not really feeling like a "proper" close to the band's first album in 14 years. However, if reports from the band are to be believed, Jericho Sirens is only the beginning of a full comeback from Hot Snakes, with more new music on the way. It sure is a pleasure to have them back.