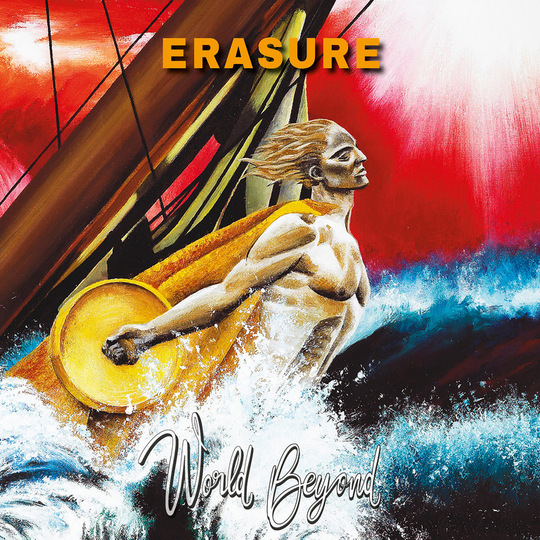 Erasure could either surprise or bore you with their latest album. Worst case: you’ll be trying to squirm away from the source of sound, like a cat that’s been held for too long. They’re renowned as a synthpop band, but their latest album World Beyond produced with Brussel’s Echo Collective describes itself as ‘post classical’. I don’t know. While there is a kind of spice which comes from Andy Bell’s unique voice, the arrangements about as predictable and consecutive as your typical Eighties B side, a kind of perseverant euphoria. Bell’s sweeping vocals come on strong. There is a tendency towards long, sustained notes, with an accent on the fourth, eighth or twelfth, and almost always matched with racing piano. In ‘Lousy Sum of Nothing’ Bell opines, “What do you feeeeeeeel now, a lousy sum of nothing; how do you feeeeeel now, say you look me in the eye”, The sentiment and emotion powering the lyrics is fair enough, but it is just so predictable. Even the “But it waaaaasn’t on the news, they don’t respect their views, and what do weeeee do about it, when it isn’t on the channel”. There is nothing wrong with that idea, but it’s just not a critique of the international media most of us haven’t already come across. Unfortunately this pattern repeats for the whole album. In ‘Oh What A World’ “it’s a craaazy world” etc.

Every song is replete with – dare I say – cliché. In ‘Still it’s Not Over’ orchestral majesty and mournful violin add sentiment to the insight “words they can’t hurt me”. It’s not all doom and gloom of course but it’s not like the fun bits are any better. There is a lot of banal optimism, “be careful what you wish for you could be the very best”, which sounds a bit like a plotless musical, or like someone singing their part of an unnecessarily intense phone call. “Please talk to me as though I’m equal, fear of rejection’s holding on”.

I mean, have we learned nothing? Surely there are writers out there that can understand the messages that the band want to get across, and find either a less sentimental or more original way of expressing them? Because in combination it’s not adding much - except that little something in the twang of Bell’s voice which is completely unique and compelling – a little something almost completely drowned out by obvious platitudes maintained for a bit too long and with a few too many strings in the background. Erasure and Echo Collective are interesting projects, but they may need to find another way to work together.