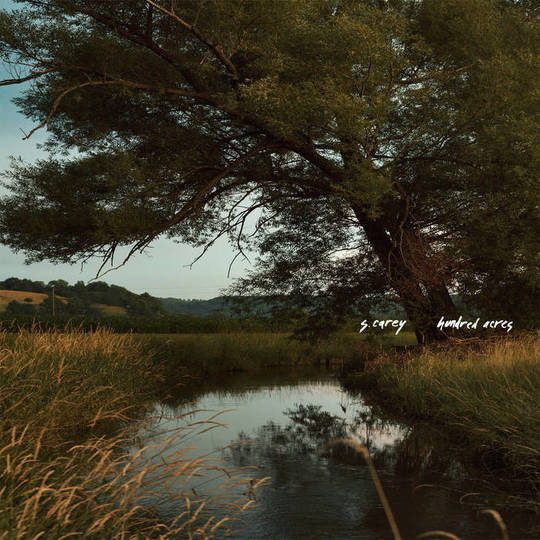 Justin Vernon has become a bone fide backwoods superstar, but not enough has been written about the solo work of Bon Iver drummer and backing vocalist Sean Carey. A classically trained jazz musician, the Wisconsin workaholic prefers to record projects during Iver touring breaks instead of basking in the frigid chill of his Eau Claire roots. Previous S. Carey projects like 2014’s stellar Range of Light have unfolded almost like sonic travelogues, with him exploring the gritty essence of various terrains with musical appendages attached. Carey looks to nature for distinct sound selection in similar fashion to the way in which Jimi Hendrix looked to colours.

Throughout his solo career, Carey has never really struggled with that tension native to most artists embarking on a 'side project' - an all-encompassing desire to distance himself from his band’s work. His organic modus operandi is as purely authentic as one can reach in his profession, but on Hundred Acres he displays a sort of cocksure elegance over his artistry. To hell with modesty, this time around Carey is in full charge of his sound, and his accompanying players sound all the better for it. The overarching theme remains the same – a modern soul set adrift in the memory bliss of nature, but there is a further degree of experimentation that is both contained and nostalgic.

Whereas Vernon has a throaty howl that is usually arresting on first listen, Carey’s vocal harmonies tend to dissolve into the sonic backdrop, often creating a forlorn ambience regardless of the particular poetics used. On 'Rose Petals' he sounds like a man at once possessed and weary of the intricacies of romantic regret. This same feeling of melancholic ennui extends into 'Hideout', where Carey dons an air of tranquility, singing rather dejectedly of a physical utopia that exists for him solely to escape the pressures of the modern world. He sounds much more invigorated on the lively 'Yellowstone', fusing together descriptions of an idyllic paradise where one is unburdened by contemporary clattering.

Carey’s adroit musicianship affords him the luxury to breathe life into sonic pastures. There is an overwhelming aura of simplicity at place, but also a rampant level of complexity within the minimalism. Because the vocals are more gift-wrapped than overt, it’s easy to get caught up in the musical whirlwind rather than appreciate all the subtle manoeuvres taking place. With room for the notes to breathe, Carey takes even more creative leaps with imagery. 'More I See' could rest comfortably next to any song in Bon Iver’s catalogue, but it is the palpable, storyboard lyricism that makes it a Carey original. He hints at a sort of innocent spiritual awakening with the soft refrain of “the more you know, the less you see.” On 'Fool’s Gold' he once again borders on celestial symbolism, addressing the listener with the same sort of familiarity becoming of old friends. The song is both naked and rhetorical, with Carey wondering aloud about the treasures humankind tends to take for granted.

The concept of seeking refuge in nature has a hold on Carey’s heart more so than previous projects. On Carey’s 2015 Supermoon EP he appeared to be straddling the line between nature’s oasis and the benefits of advanced technology, but on Hundred Acres he is fully invested in all things environment related. We are treated to his customary lush instrumentation, breathing life into each record, but the motifs are somewhat exhausted with each subsequent listen. The title track has a folksy allure that is immediately captivating, but the anecdote of Carey and his intended subject losing their postmodern bearings in the full magnitude of nature’s wonders loses some of its appeal at this point in the record. This is a minor concern to be sure, especially considering how Carey seems to effortlessly blend his soft coos with the surrounding sounds at play. 'Meadow Song' is a curious downpour of discord as he rounds out the album. It’s a fitting cap to a rhythmically dense album that suggests Carey’s ever-evolving sound is in its prime stages.