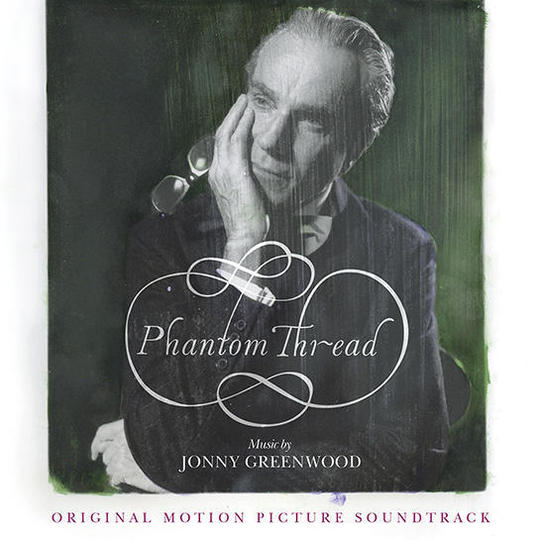 You’ve got to admit – that Jonny Greenwood is a clever lad. When he’s not whipping his hair back and forth with the moderately successful, Oxford-based, alternative rock group The Radioheads, he’s knocking out this sort of thing. This is soundtrack number nine for him and his fourth in collaboration with Paul Thomas Anderson. If you’re expecting loads of versions of ‘Creep’, but with a few cellos, sawing away in the background, then I’d save your pocket money. For Phantom Thread, He’s delved back into the era before rock and roll to create a series of beautiful arranged vignettes of Fifties London. So, no noisy electric guitars, then.

Phantom Thread centres around dressmaker Reynolds Woodcock (Daniel Day-Lewis) and his sister Cyril (Lesley Manville). They’re right at the heart of British fashion, dressing royalty, heiresses, socialites, movie stars, debutants, and dames while Woodcock amuses himself with a variety of lady friends, until he meets a woman who, in true Hollywood fashion, sweeps him off his feet, disrupting his ordered existence and sending him all of a tizzy. This is not the kind of commission which means you can just plug a Stratocaster into a Marshall amp and hope for the best…

Greenwood has created 18 pieces here – ranging from small ensemble to full on orchestral works. It’s apparent right from the opening piece, ‘Phantom Thread 1’ that he knows what he’s doing. The attention to detail is incredible and the high, searing string lines are as well written as some of Malcom Arnold’s work on ‘The Sound Barrier.’ It’s incredibly evocative. On ‘Sandalwood I’, we get a hint of Philip Glass-style minimalism with violin arpeggios beneath a decorative piano line. This is one of the few occasions where hints of Greenwood’s day job poke through. This isn’t a bad thing at all. The eerie opening bars of ‘The Hem’ have a hint of the menace of latter day Radiohead, but it’s beautifully counterpointed by a gorgeous, if slightly ominous, piano and string part. ‘Boletus Felleus’ (a sort of mushroom, I believe) throws a little bit of Bartok into the mix and if you close your eyes, you can almost hear something like squealing guitar feedback. Genuinely unsettling.

Greenwood has a vast and impressive palate and can create convincing, woozy Satie piano pieces (Phantom Thread II) as well as full blown, strident orchestral work (Phantom Thread IV). There’s a hint of Samuel Barber’s ‘Adagio for Strings’ on the latter and when the violinists hit the top of their range, it’s like someone is blowing cold air directly onto your brain.

There’s a trend with soundtrack albums - they got purchased when a film comes out, played once or twice and then filed away, never to be touched again. Unless they’re ‘Grease’ or ‘Saturday Night Fever’ or ‘The Sound of Music’ of course and then they get recycled via charity shops or car boot sales on a regular basis. I’d like to think that Jonny Greenwood’s confident and assured work on Phantom Thread will ensure that it gets a little more longevity. Of course, Radiohead completists will buy and pop it onto the ever growing ‘solo albums etc’ pile. It would be a shame if that was its only fate. There is much to enjoy here and if you have the slightest interest in contemporary classical music or you’re a soundtrack buff, give this a whirl. Jonny Greenwood may be one of those scruffy oiks in a pop group, but he’s proved once again that there is an incredibly musical mind under the haircut.

A Day with the Homies

Could It Be Different?