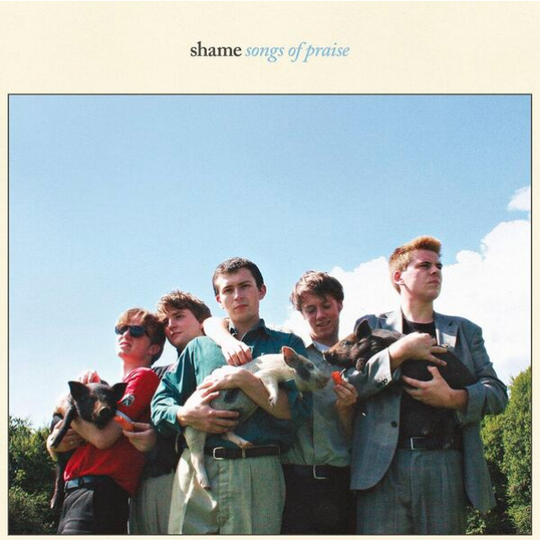 The most you can ask of a young band is honesty. Inauthenticity is as transparent as it is deadly and even the slightest scent of it can doom an act to a short lifetime of irrelevance and anonymity. Fortunately, Shame pass the authenticity smell test; unfortunately, their genuineness exposes the fact that they are a band without much new to say.

When we have the taut, minimal rage of Idles, the self-possessed political punk of Dream Wife and the situationist rock’n’roll debauchery of The Moonlandingz, the bar is high for a new voice looking to make a mark. Shame are aware that the platform of a debut album is an opportunity, but the execution lacks imagination.

The Brixton five-piece formed three years ago in the same rehearsal space that spawned Fat White Family, and they came up in a community that included Goat Girl, HMLTD and the dearly departed Dead Pretties. This debut album arrives sooner than that of any of those scene-mates and does encapsulate the broiling, discontented energy that binds those bands together. Singles ‘One Rizla’ and ‘Concrete’, for example, are driven by sharp, impatient dual guitar licks and acerbic, scowling vocals from Charlie Steen. They resist obvious boozy, shout-a-long-able choruses too, which is a bonus. But the tunes that propel Goat Girl, the formal experiments that define HMLTD and the blues rock power that spearheaded Dead Pretties are all absent, as is an equivalent defining feature of their own.

At their most successful, they find a dark, menacing mood that fits their voice and sound, most strongly on ‘Dust On Trial’, which sees Steen’s black gothic vocals and Sean Coyle-Smith’s unrelenting anger-chiming guitars combine to create a creeping, intimidating final product. For a band that do not have the instinct to make their music pretty, this is a satisfyingly ugly opener.

They do strive to have something to say and it coagulates into a statement most impressively on ‘The Lick’. Over a lead guitar line that falls somewhere between a prowl and a strut, Steen speak-sings, “So why don’t you sit in the corner of your room/And download the next greatest track to your MP3 device/So sincerely recommended to you by the New Musical Express,” before continuing to implore us to take it to our friends’ place and to sit and marvel at our “four chord future”, because “that’s what we need/something we can feel/something that’s relatable not debatable”. Steen’s deadpan delivery might even be dry enough to convince us that this could be a good idea, were it not for the fact that he had started the song by detailing a trip to the gynaecologist with a “golden ticket hanging out of my pocket”. Shame are having fun here, and this tale of the way we consume our music is no celebration.

Elsewhere, the one time they succumb to an earworm-able tune with ‘Friction’ is welcome, with Steen reading out a list of wry soul-searching questions that could have existed on an early Scroobius Pip release. But as is true throughout Songs of Praise, the little variety we get in lyrical content is not reflected musically. As a recording band, they exist within a narrow stream, neither daring to dabble with more colourful textures, nor mastering the essence of their own simplicity. It is, ultimately, an unimaginative album from a promising band. Better records may lie ahead for them, but for now they will struggle to reach far beyond their existing fanbase.