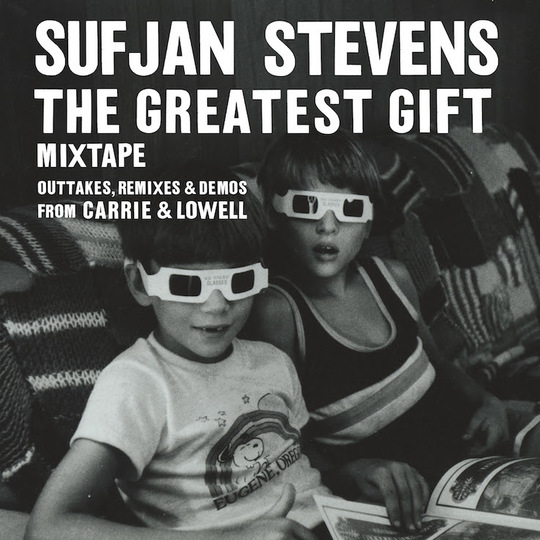 Just when we all thought we were getting over the quiet devastation of Sufjan Stevens’ 2015 masterpiece Carrie & Lowell, here he comes again, back at us with a “mixtape” offering outtakes from that album, remixed versions of some of its songs and – deep breath – four brand new previously unreleased tracks, omitted from the original, but recorded at the same time and very much of a piece in mood, theme and timbre.

Anyone who adored Carrie & Lowell will feel themselves instantly re-immersed in its melancholy, sometimes brutal, always beautiful world listening to The Greatest Gift. Inevitably, the most interest will be devoted to those new songs: and rightly so. Opener ‘Wallowa Lake Monster’ is a delicate delight, weaving and blending in tales of the singer’s troubled mother with references to mythical beasts and monsters – Leviathan, a feathered snake, a demon, a dragon (“the monster showed its face”); the music flitting between the gently acoustic and the softly epic – ending with a rush of angelic choral voices underpinned (undermined?) by some harsh brass dissonant notes. It’s hugely affecting.

‘The Hidden River of my Life’ takes a similar turn: eerie and grandiose in places, infused with water-based metaphors as well as some fairly stark confessional moments (“Abuse has left me on my side”), it is strange, unsettling, disorientating; while third new track – ‘City of Roses’ – is ostensibly much more upbeat, seeing our hero “facing the sun of my salvation” in a cheery folk music setting, while still leaving us with the kicker admission: “I’m the champion of repression”.

Title track ‘The Greatest Gift’ is short, sentimental and a little bit Sufjan-by-numbers, exhorting us to “Love your friends and lovers / Lay down your life for your brothers.” Probably the least interesting of the brand new songs, it feels right that it didn’t make the original Carrie & Lowell cut.

Much better is ‘Exploding Whale’ – previously a 7” single release – here remixed by Doveman into a twinkly sparkly setting which works rather well in combination with Stevens’ softly-delivered vocals. Of the other remixes on the mixtape – all the rest being of actual Carrie & Lowell album tracks – some, as is usually the case with this kind of thing, are more successful than others. 900X’s lush setting for ‘Fourth of July’ slightly detracts from the intensity of the original, its bald statements of grief and treatment of death swept up and partly swept away by its synth chords. Helado Negro’s take on ‘Death With Dignity’ brings spaced-out sounds to the track which rather suit it, tinkering with the original more than radically altering it. Best of all is Sufjan’s own remix of ‘Drawn to the Blood’, which transforms the track into a kind of gentle rave banger, softly euphoric, quietly urgent.

But ultimately, what the two ‘iPhone Demos’ included (‘John My Beloved’ and ‘Carrie & Lowell’) remind us is of the fundamental strength and impact of this collection of songs. Stripped bare of anything other than Stevens’ voice, a guitar and a slightly imperfect recording, their power and beauty still shine through. The added bells-and-whistles of remixes and alternate versions are an interesting side-note, sure, but still, in the end, lead you back to the original album in all its complex, bruised and beautiful glory.