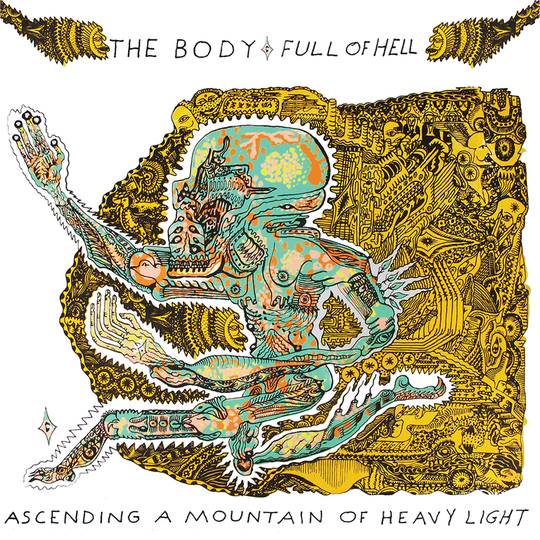 Two of the more intriguing heavy metal acts in the current game, Providence, Rhode Island sludge-metal band The Body and the Maryland-via-Pennsylvania grindcore band Full of Hell have already collaborated on a full-length studio album. Last year's One Day You Will Ache Like I Ache saw the two bands come together in exactly as chaotic a fashion as anyone who had heard the respective bands would expect, if not exceeding those perceptions, peaking with a cover of Leonard Cohen's 'The Butcher'. Indeed, both bands have even released their own records individually during that time, sticking to their more attuned sound than their experimental collaboration, in The Body's No One Deserves Happiness and Full of Hell's 'Trumpeting Ecstasy'.

That first collab perhaps leant more on The Body's more traditional sludge as opposed to Full of Hell's mind-bending electronically indebted grindcore. Ascending a Mountain of Heavy Light their second collaboration, sees things swing the other way, with an even more psychotic experience than previously imagined. The immediate noise one is greeted with on opener 'Light Penetrates' pretty much tells you everything you need to know about this journey.

The crucial new element to the two extreme metal band's second collaboration, however, comes from a somewhat side-stepped source, in Brian Chippendale of Lightning Bolt fame. Another Providence, Rhode Island resident, Chippendale's various guises have existed in the same spaces as The Body, and while Lightning Bolt are more known as a 'noise' act than a 'metal' one, there is a clear influence of that genre apparent, especially on comeback album Fantasy Empire and its lead single 'The Metal East'.

As ever with Chippendale's elusive, idiosyncratic drumming style, we get corresponding music that transcends easy genre definitions. Neither The Body nor Full of Hell are your traditional acts as it is, so that fierce avant-garde spirit works perfectly with Chippendale's eccentric playing. On 'Our Love Conducted with Shields Aloft' for instance, we get the mad, free-form, jazz playing that is synonymous with Chippendale over a buzzsaw hum and some, frankly terrifying high-pitched vocals that simmer somewhere at the top of the mix. Meanwhile 'Master's Story' following on after it, is a comparatively more controlled performance, relatively speaking, creating a tense, industrial mood Trent Reznor would be pleased with.

At the record's best, the added electronics give a bounciness similar to Death Grips. Given drummer Zach Hill is a close contemporary of Chippendale and share a similar turbulent drum style, this shouldn't be too surprising, completely different vocal styles aside. Tracks like 'Earth is a Cage' and 'Didn't the Night End' for instance have the same playful-yet-hard-hitting style that one might expect out of the punk/hip-hop group pulsating, swarming electronics, drums and all. Meanwhile, Chip King of The Body's vocals pierce eardrums providing one of the few 'high-ends' on offer.

There is no denying, however, that Ascending a Mountain of Heavy Light is no easy listen. This shouldn't come as too much of a surprise from two recent masters of the (extreme) heavier genres, but at times the project, it appears at least, is insisting to be as infuriating as possible. In many places, this record sounds and feels like a migraine captured on tape, and that is not a pleasant experience, nor is it meant to be. Unlike the more luscious, shoegaze influence that's pervaded Black Metal in recent years, this feels like an absolute rejection of that, being as difficult and painful to experience as possible. As a result, The Body & Full of Hell's second collaboration album together often feels like a real challenge and not for the faint-hearted when it comes to music – 99% need not apply.