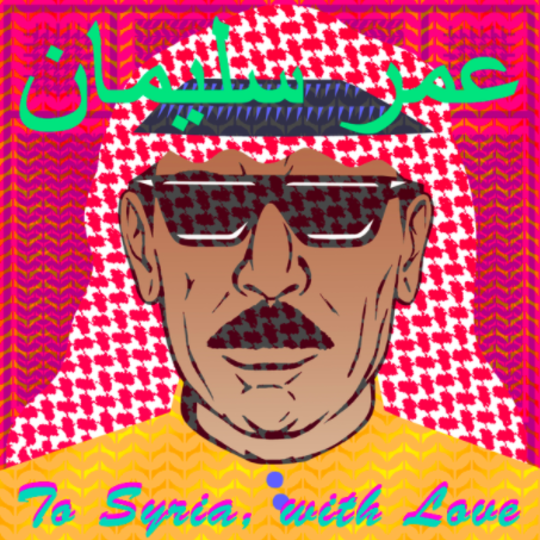 The press for Omar Souleyman’s third internationally-released album asserts that the Syrian musician took the decision to keep the new material apolitical. Really? The most familiar musician from his country to the Western world is driven into exile in Turkey, and writes a 53-minute love letter to his home land and people, and we are to read no political dimension into it? Souleyman has been an advocate for the ‘Our Heart Aches For Syria’ charity, has worked closely with Medicins Sans Frontiere, and played the Nobel Peace Prize concert in 2013. He may not choose to identify with specific movements or leaders, but he’s not singing about what he ate for breakfast either.

“Look upon us, O Lord/Our sadness is larger than mountains/We are in exile, and our nights are long/Our homeland is our only comfort/We are in exile, and our nights are long/It’s hard to find comfort.” That is the cry from the heart on the song ‘Chobi’ that defines the tone of the album. Souleyman co-wrote the album’s lyrics with his long-time collaborator Shawah Al Ahmad, who was himself recently imprisoned by Daesh near his home in Aleppo. On To Syria, With Love, Souleyman acts as an emissary, a needed reminder that news reports and parliamentary debate are not the only ways we should allow the Syrian civil war, now six years in and counting, to enter our lives.

All of which may make this album seem daunting, but the stark reality of the lyrics is more than offset by the boundless energy of the music. Souleyman comes from the dabke tradition, the folk Arabian dance defined by pounding, careering rhythms and frenetic keyboard and saz solos. For twenty years, he established a reputation as the most sought-after wedding singer in his nation, releasing over 500 recordings to a febrile black market audience on a more-or-less weekly basis. His inclusion on a 2007 compilation from Sublime Frequencies named ‘Highway To Hassake’ changed his life, however, and the two previous albums to this saw him working with artists from Four Tet to Modeselektor.

As with 2015’s ‘Bahdeni Nami’, Souleyman is at his best when he can cut loose on a classic, high-speed dabke piece. Few artists have released as entrancing and danceable a track in 2017 as ‘Ya Bnayya’, a tour de force for Souleyman’s finger-blurringly virtuoso saz style. ‘Tensana’, a bonus track on this physical issue of the album that had not been available on the previous digital-only release, is similarly exciting, and you realise exactly why so many outside of Syria have fallen for his music at first contact. There is joy simply in hearing a master at work, the phenomenon dubiously described by some as ‘competence porn’, and Souleyman indulges us throughout the record.

Perhaps inevitably, though, after a number of summers sharing stages with Western big-sellers and a growing audience around the globe, the music has begun to evolve too. His compositions have always intersected with electronic production, but his long-time programmer Rizan Sa’id has been phased out for this project, replaced by Hasan Alo, whose signature four-to-the-floor arrangements are a little staid and repetitive by comparison. The synthesis of this incoming stamp with Souleyman’s traditional style is not entirely seamless – the joins are audible, and somewhat jarring too. Opening track ‘Ya Boul Habari’ is the most conspicuous, its clean-cut beat draping a glossy sheen over the track, dampening the illusion of spontaneity that is so central to the magic of Souleyman’s music.

That said, almost no production quirks could suppress Omar Souleyman and his playing. With the singular exception of the mournful, aching track ‘Mawal’, To Syria, With Love is a celebration of the music of Omar’s home. With the life and vibrancy of the compositions necessarily tapered by the sobering, harrowing reality of the honesty in his lyrics, he has brought us an all-too-real-life case of tears on the dancefloor.