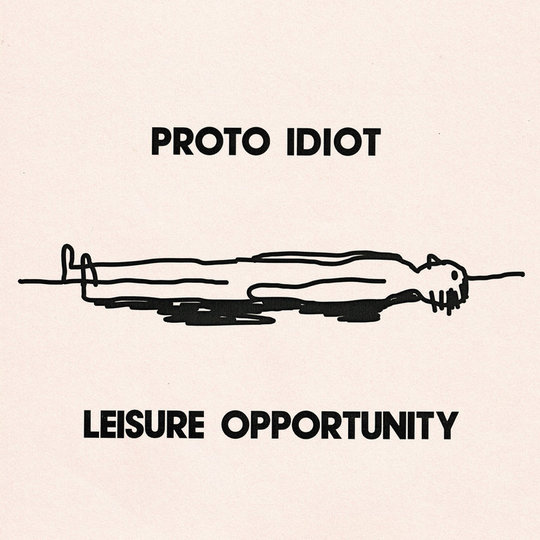 Let’s play a game. I’m thinking of an album – not this one, because that’d be so obvious, and anyway Proto Idiot don’t write songs to ponder over. You try and guess what that album is by the end of this review. I’ll try not to give it away.

Anywho – what is a proto-idiot? Well, think of a number, divide it by two, multiply by six, and that yields disaster, for no number existed in the first place. Or rather, yank the concept of 'proto-punk' – garage rumbles, Yardbirds-y scuffles, slightly askew rock n’ roll rambles a la The Modern Lovers – and strain the pulp, mix with soda water, serve to the kiddies to give them the illusion of imbibing the bubbly.

But alas! Andrew Anderson, the proto-Proto Idiot, has perhaps suspected that he’s only moving in a straight line for the past seven years of his recorded output. So lo, his second album Leisure Opportunity dips into the deep end of stupidity: the start-stop action of a wind-up toy, banal truisms such as “This is a theme song, it goes like this!” Dash the proto, and you’ve got a true flailing, bug-eyed moron, who mimes all the actions of frenzy with no drool on his lips, no psychosis to blame, and no trigger to pull.

Now, at very least, Proto Idiot is no energy void. To Anderson’s credit, he’s nailed the woozy wildcard delivery of Pete Shelley or Colin Newman, to the extent that you can hear his arms pinwheeling in the air. And of all the silly scrambles and pseudo skirmishes, 'Finally Have To Face Myself' actually bruises like an actual punk on the playground, battering Anderson so brutally that he can barely stand in the last 20 seconds.

But there’s something going on that’s not right, uh-huh. Imagine the boys’ infantile grins as they waddle into 'I’m An Artist': ”I’m the guy with one idea / and that’s enough for this band here.” The gag implies that they’re referring to certain brats in the coddled creative class; yet, flip the mirror round, and Proto Idiot can’t float many ideas of their own, beyond showboating their own childish gaffs. The totally inane and lumbering ‘Yes Yes Yes Yes’ shoves its self-affirming punch-line down yr gullet with a litany of brain-dead responses (the climax – Anderson spelling 'yes' four times). Meanwhile, 'Theme' extols their mental deficiencies as a worthy communion of imbeciles: I’m stupid, you’re stupid, let’s do it.

See, had I no context or background in this degree of deranged post-punk, I’d stay glued to this TV set. But even today, there’s plenty of subgeniuses out there who tote more imaginative freak flags. On your side of the pond, for instance, you’ve got Dog Chocolate, who can stir up the same sort of calamity while also wheeling round a bevy of topics (theoretical cats, excess litter, drinking culture, the existential horror of roundabouts, etc.). Over here, we’ve got those rapscallions The Gotobeds, who are bout to drop a five-minute wallop of a Redd Kross EP, after their properly sloppy 2nd album from last year. Both those gangs could slant their inferior intellect to avenues beyond their selves, to forms of indignation that don’t bounce back like invalid checks (note how the GTBs, as proud Pittsburg natives, can sideswipe New York and LA; or how Dog Chocolate, as a band with a legitimately clever name, can muse on how the hell anyone thought Wet Wet Wet was a worthy moniker).

All this, in sum, renders Proto Idiot as one-dimensional boys, a side project for dumb gags, lads content to move simply from point A to point B, avoiding C, D, and E in the process. While Leisure Opportunity presents Proto Idiot as decent blokes who don’t mind taking the piss, you’ve heard plenty of other musicians and bands knock much harder at themselves (and others), with far more electric energy than this brief spark. And one has to wonder – if, after nearly a decade of idiot adventures, Anderson has flat-lined into a blank as vapid as the so-called artists he mocks, then how many years will it take for Proto Idiot to evolve into an idiot savant? How many? How many? How many?!

[The album I’m thinking of is Wire’s Pink Flag, FYI – which, in fact, a local coffee shop played in its entirety as I was preparing for this review. The resemblance is so uncanny, and so painfully inferior, that it defies mere name-dropping.]