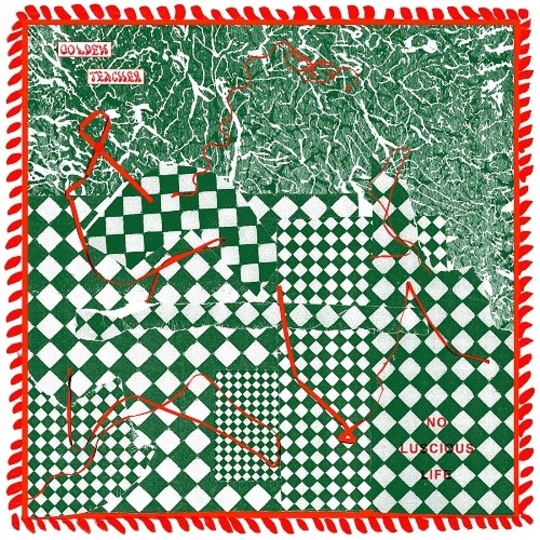 It's perhaps Glasgow's worst kept secret, and yet its 'alternative' music scene (and that term is used as broadly as possible) still remains one of the city's best-hidden gems. Due to legendary club nights led by the likes of Optimo (who this summer celebrated their twentieth birthday as a group) and the importance of the Art School, Glasgow's electronic scene is especially impressive, but it is one that overlaps into lots of genres, including art-pop/rock and punk. Occasionally, bands like Franz Ferdinand, or most recently, Sacred Paws or Spinning Coin, break through that wilfully underground positions into a mainstream fare that is still proudly maintained by Glaswegians. Perhaps it's the size of the city or its fiercely socialist leanings, but for a city that is often stereotyped as one full of 'knuckle-dragging, knife-wielding, sectarian hooligans', it is perhaps one of the most nurturing places a young artist or artists can exist.

So Golden Teacher, in many ways, typifies that creative spirit that Glasgow proudly exudes on a daily basis. Their members are made up of Weegies from various bands and collectives such as Ultimate Thrush and Winning Sperm Party respectively, they record in the increasingly legendary Green Door Studio in trendy Finnieston - a studio set up by the elder statesmen (and women) of Glasgow electro/house to give back to younger artists - and are on Optimo's label. Oh, and they are named after a variety of magic mushroom. This is just one of many examples of the tight-knit dual-communities between art and music in Scotland's largest city. However, Golden Teacher are notable because they have transcended simple scenes or genre classifications, to become one of the city's perennial cult bands largely thanks to their explosive, propulsive, hypnotising live shows and music videos that double up as art installations.

Since 2013, over the course of four EPs and various singles, the dance-punks have developed quite the following, gaining them a tour with legendary post-punk band ESG in 2015. So, it is with much excitement to find No Luscious Life the band's first proper long player as it is a suitable length to capture the band's hypnotic, enthralling live performances. The sextet have always been frustratingly difficult to pin down genre-wise, but that is exactly part of their charm. Due to their collaborative nature and diverse backgrounds, they seamlessly shift from funk-punk, disco, house and afro-beat without so much as breaking a sweat. They were once anecdotally described to this writer as 'all of Primal Scream's eras mashed into one' and while the band may, or may not, take issue with this, there is certainly something within that description.

True to form then, No Luscious Life successfully translates Golden Teacher's eclectic sound into a cohesive, expansive piece and it is thrilling to experience. The band's frontline is led by dual vocalists Cassie Ojay and Charlie Levanac, who take turns in throwing their quite contrasting vocal styles into the pot, sometimes spontaneously, seemingly, then behind them are the 'electronic' duo Richard McMaster and Sam Bellacosa who also perform as Silk Cut, and then the Pitt brothers, Laurie and Ollie of the aforementioned Ultimate Thrush, who bring the punkier, live elements to the band such as drums and guitar. Between the six of them, or the three duos, if you will, Golden Teacher produce an energy and intensity one is unlikely to find elsewhere, while equally creating a euphoric and psychedelic experience for listeners.

Opener 'Sauchiehall Withdrawal' immediately places the listener in Glasgow's most famous nightlife street, before setting them off on a mystical intergalactic journey from there. 'Diop' shows the band's debts to African music, name-checking the famous Senegalese poet, all percussion and bongos, before immediately submerging into an instant house classic in 'Spiritron'. And so the record goes on, never allowing the listener to second guess what trick the band may pull out of their sleeve next, but ensuring it is a magical experience all the same. 'Shatter (Version)' is the album's dark beating heart, while 'What Fresh Hell is This?' is the trippiest moment of all, manipulating a funky drum beat and bass line into something almost Aphex equalling amounts of mind-bending. Meanwhile, the finale and title-track seemingly sum all these varied influences and experiences into one all-encompassing track, placing one into the cold light of day at the other end of the long night.

No Luscious Life exceedingly delivers on all the promise Golden Teacher have shown so far in their still relatively short careers and is perhaps the moment that breaks them through into a wider audience. There is no denying that the band are one of the UK's most exciting prospects around right now, and with this late in the game-winner, their debut full-length could well see them live out that potential. Here's hoping.