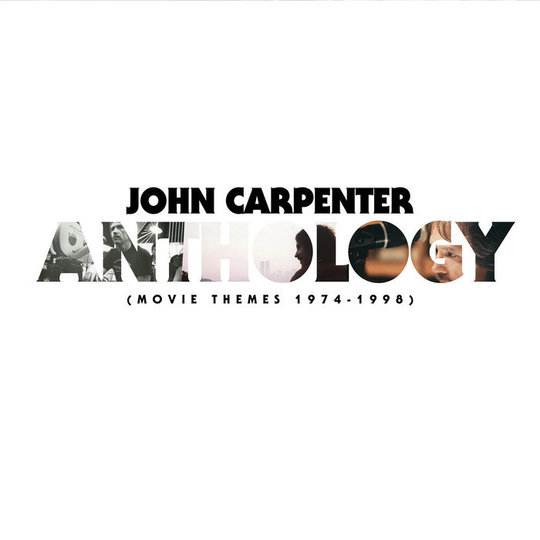 For some the memory of Halloween night as a little kid is tied up with store-bought or parentally improvised costumes, walking the cold local streets, knocking doors in search of treats; warming, filling, psychosis-inducing candy overload. The sounds are of children’s chatter - excitable, trepidatious yet bold as they scare themselves with tales of a night on which the ghouls come out to play.

For others though the memories are much more voyeuristic - a night spent thrilled and terrified in front of a TV screen watching teen proxies hunted and savaged; they race through the streets of their hometown unnoticed as they attempt to escape the indescribable things that the line between this world and a much darker one has allowed, unbidden, to cross. The sounds are of panic, tension, wild, primal screams - and the music, like some of the movies themselves, is by John Carpenter.

On Anthology: Movie Themes 1974-1998, Carpenter allows a panoramic view of the music he created to accompany his films that, of course, is hard to separate from the movies themselves. As a theme strikes up, the mind conjures a striking visual, often iconic, sometimes unconsidered for years. It might be that of Kurt Russell as ‘Snake’ Plisken from 1981’s Escape From New York as the simple, bold synth signature fills the air or perhaps that beautiful, deadly red Plymouth Fury named Christine from ’83 as the atmospheric electronica envelops you in a blanket of deep, unnameable unease. Carpenter himself provides these visuals at live performances, eliciting arena rock show screams of recognition from the throng as those aged images flash high on screens behind the man himself. He, of all people, understands the power of the combination of music and moving image.

That’s part of what’s so satisfying about the music here. Not all of it is great, as not all of Carpenter’s movies are great; The opener from In The Mouth Of Madness (1994), which boasts a riff originally picked out by The Kinks’ Dave Davies, now performed in these carefully constructed re-recordings by Carpenter’s son and bandmate Daniel, veers into wailing metal territory to an almost ludicrous degree; The blues rock jamming of ‘They Live’ (1988) is as interminable as the otherwise perfect film’s interminable central fist-fight scene. Yet it’s always unmistakably John Carpenter - even when he appears to get it wrong the work has such a sense of personality and identity that it’s impossible to dismiss or, truly, dislike. The images it evokes are, while sometimes terrifying, strangely comforting.

There are many incredibly evocative moments here. The raging, religious apocalypse of Prince Of Darkness (1987) is as overlooked and remarkable as the film itself; the jittery, pulsing Assault On Precinct 13 (1976) with its swathes of minor key synth envelops entirely; the epic, lachrymose Starman (1984), is an instantly moving, hopeful piece that stretches out into the orchestral at just the right moment.

Carpenter’s signature sound - the pitch dark, unsettling synthscape that is at once defiantly electronic, purposely placed in the uncanny valley and simultaneously deeply emotionally connected and capable of subtle nuance is something artists such as Chromatics are constantly searching for and, thanks to Carpenter’s blueprint, often delivering.

When we look at movie directors’ cultural impact it’s often something that is quantified not necessarily by the kudos afforded their work at the time of release, more by the influence it had on subsequent filmmakers and often then by reappraisal - a backward, loving stare at titles overlooked or disregarded at the time. In this extremely rare case, this has applied to Carpenter both as filmmaker and composer. Over recent years his influence has increased as his films and latterly his music have been remembered, re-evaluated and rightly lauded(thank you, Death Waltz Records). He’s now seen as an auteur in the true sense and while he may no longer be making movies (his last feature The Ward from 2010 featured neither music from Carpenter nor any of his filmmaking flair) he continues to push the musical envelope, releasing the atmospheric ‘Lost Themes’ II, his second album of original, non-film related music just last year.

And so we arrive at both Halloween and Halloween (1978) - the pin-drop theme that made his name alongside the beloved and genuinely terrifying motion picture. It is as harrowing, as discomfiting and as gloriously inventive as a horror theme ever was. That other kind of kid - the one under the blanket, a hand over their eyes, thrilled and compelled by terror on a cold October night - is brought back into the world as a memory, powerful and real, a lifelong obsession ahead of them - and we have John Carpenter to thank for that.