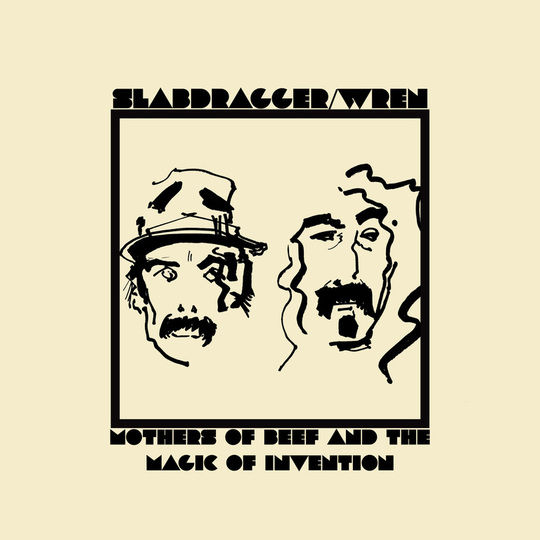 Covers are a tricky thing to get right. Play it too safe and you’re left with something that resembles the original so closely you think ‘what was the point?’, but veer too far from the source material and you can end up with a car crash that doesn’t resemble the original, leaving you thinking ‘what was the point?’ This is the dilemma facing Slabdragger and Wren but things have been aped even more, as they are tackling to behemoths in the alternative/experimental music scene. Frank Zappa and Don Van ‘Captain Beefheart’ Vliet. This is something that excited the hell out of me when I first heard about it, but can it live up to this initial excitement or will the results leave me thinking ‘what was the point?’

Slabdragger certainly live up to their name with a ten-minute rendition of Frank Zappa’s esoteric ‘Muffin Man’. Originally this whimsy leaden track was taken from the ‘Bongo Fury’ album, which featured Captain Beefheart on vocals and saxophone. ‘Muffin Man’ opens with the same spoken word soliloquy as the original, but it has been manipulated so it sounds like an alien from a Fifties B-Movie, then the fun starts. An explosion of doom laden guitars wash over you while nursery rhyme like lyrics remind you that this isn’t to be taken that seriously. You are hit with insane riff after insane riff while the whole thing is under pinned by a droney rhythm section that never lets up. What Slabdragger have done is extended the really fun parts of the song, namely that riff, and made it heavy as hell. These alterations work incredibly well and it shows off Slabdragger’s musicianship, especially in the extended outro that could/should have been elongated even more! The original ‘Muffin Man’ is a whole lot of fun, but given the Slabdragger treatment it becomes something else entirely, and you feel a pang of sadness when it ends. So far so good.

The flip side is taken care by Wren. Earlier in the year their debut album Auburn Rule blew away all preconceived conceptions of what they could do, as they delivered a record that was as dark and harrowing as it was playable. Those five songs found a way to bore down into your head and were a perfect soundtrack to getting your dream job and walking home in the rain after your team has lost 3-1. Wren decided to tackle one of the good Captain’s best-loved songs ‘Electricity’. Opening with sombre and melancholic guitars, there is a visceral explosion of bellowing vocals and the kind of dread and foreboding that would make Scary Terry shiver. After listening to it for the first time it’s hard to find a connection between the original and this eight minute hulking beast, apart from the name. After repeat listens you start to make out garbled, gurgled and guttural moans that could be construe as the words to the song and guitar riffs that could be Ry Cooder’s if you listened hard enough. Wren’s version of ‘Electricity’ sounds so fresh and visceral that it’s hard to believe it’s a cover at all, but a reinterpretation. While this is post-metal at its best, and most terrifying, there is something fundamental joyous to it, that’s it’s hard not to enjoy.

The best thing about this split release is you don’t have to have any knowledge of Zappa or Beefheart to enjoy the music, and in Wren’s case it doesn't matter if you do as their output sounds nothing like the original anyway. This single is important, not just because it further cements why Zapper and Beefheart were one of a kind musicians and composures, but because Slabdragger and Wren are having the time of their lives recreating these classic songs in to something fun that a new batch of fans can fall in love with. But most importantly this shows that metal does have a fun side and doesn’t have to take itself seriously all the time. Holy Roar, and its sister label Truthseeker, are becoming the indisputable home for forward thinking metal.