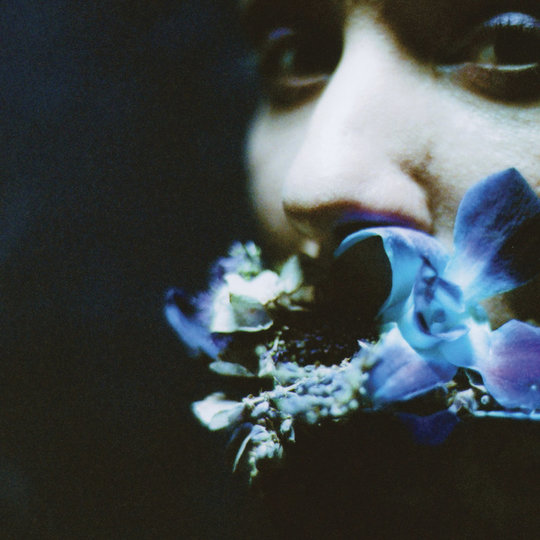 Every day, I write a lot of words about music. Oftentimes, however, I’m struck with this intense discomfort – and yes, guilt too – at taking records apart and breaking them down. In hindsight, I sometimes feel dirty and voyeuristic about it. Yet still, I can’t help doing it time and time again. Like an intruder in this mysterious exotic world, I’m essentially using my words to taint and domesticate its space. But part of me yearns for some kind of revelation from music, to filter out feelings I have yet to articulate. A great record can draw out these big existential questions. The new Circuit des Yeux LP Reaching for Indigo, provides one answer at least; albeit a very personal, clandestine one to the woman behind the project, Chicago-based musician and composer Haley Fohr.

Fohr – who ardently challenges the notion of a ‘confessional songwriter’ – vows only one thing on opening cut ‘Brainshift’: “I can only promise to take up space”. Throughout these eight tracks, she intuitively navigates within the dark and mysterious space of her psyche: an undomesticated, sometimes precarious landscape bustling with flora and fauna. With that rare quality of sounding both grand and plaintive, Fohr’s voice is accompanied by a prowling organ on ‘Brainshift’, as if scrutinising the terrain up on a hillside. This isn’t exactly a dainty Disney scenario, like an effigy of some ingenue frolicking her way across, breaking into song with anthropomorphic woodland creatures. An ominous horn resounds like a warning: this journey will be treacherous, one of Biblical proportions.

Fohr, a powerful baritone with four octave range, is a great singer: a torrential force which can potentially overtake anyone in the vicinity. Her singing embraces chaos as much as harmony, in similar vein of forebears Diamanda Galas, Scott Walker and Patty Waters. On ‘Black Fly’, surely one of the most majestic and arresting tracks put on record this year, she goes all-out. “Nobody said it was easy/But it was so easy”, she boasts, refusing to succumb like some victim to these crude, untamed emotions. Instead, in the first half of the song, restraint and harmonics are nourished. A lyric like “To stand alone/the breeze in my hair” could easily read like some tacky soundtrack of Pocahontas or Ferngully. The harmony of the song’s avant-folk leanings, however, is eventually met by a buzzing, crawling ecosystem of dissonant noises, something not unlike Werner Herzog’s colourful musing on the “obscenity” of the jungle. But nevertheless beautiful in all its lawlessness and abstraction, recalling Can’s equally opaque masterpiece ‘Sing Swan Song’.

Indeed, there’s a better balance between the unruliness and deftness on Reaching for Indigo than predecessor In Plain Speech. Fohr’s pipes still burrow themselves across the earth with tectonic force, reaching for light. The wistfulness of her voice around 1:20 of ‘Black Fly’, combined with benign strands of acoustic guitar, simply oozes compassion and kindness.. A benevolent ‘reaching out’-moment, instead of shell-shocking the listener like only she can. ‘Black Fly’ is, in many ways, a testament to Fohr’s growth and self-awareness as a composer and songwriter. On Reaching for Indigo as a whole, the potency of her music is expressed as much by gentler means, using more calms to alleviate the listener from her customary emotional maelstroms.

Last week Fohr streamed Reaching for Indigo prematurely on her own website, accompanied with a somewhat Delphic statement. She describes a strange experience overcoming her on January 22 this year. A potent surge of emotion and disarray overcame her from within, it affected her even physically. A transformative experience, she recalls, even she must’ve felt strange, anxiety-ridden and painful at that very moment.

That being said: Fohr spent the bulk of her career overcoming discomfort through sheer will. Before recording In Plain Speech, she realized even her immense vocal presence could be snuffed by chaotic bar banter. So she searched out other voices to amplify her own, musicians Ka Baird, Tyler Damon, Rob Frye, Joshua Abrams and Whitney Johnson, as well as filmmaker Julia Dratel. In the Dratel-directed ‘Doing The Dishes’ video, Fohr appears without clothes, despite her own initial reservations to do so. When someone discouraged her not to go incognito as Jackie Lynn, she did exactly that, exploring her art more playfully and pragmatically. These and the many more challenges she overcame, they all sort of met her own trajectory halfway. For Reaching For Indigo, however, a great deal of Fohr’s trials feel solitary and self-imposed.

Centerpiece ‘Paper Bag’ seems to actually revel in total confusion and disarray. It truly is a psychedelic piece of music, not in this stoner ‘whoa’-kind of way. More urgent. Fohr’s voice convulses and haunts, both frightening and playful, as if channeling a photographic memory of being a newborn pulled from the mother’s womb. When the song springs into gear in full-blown Seventies freak folk splendour, it’s like being wrapped in a warm blanket: safe from harm, yet bombarded by thousands of alien impulses.

Considering the endless flow of information our developed brains are exposed to now, there’s no telling how our imagination will be compromised in the future. Well, Fohr’s imagination is running amok on Reaching For Indigo. This time around, she’s way more comfortable communicating her ideas to her ensemble of musicians. She allows the musicians to interpret them freely, augmenting this potent metaphysical atmosphere further. It all culminates on ’A Story Of This World Part II’, a rousing collaborative live composition that ripostes the more contemplative first act on In Plain Speech. There’s a palpable sense of giddiness here, with Fohr stretching her voice to its utmost limits. On the nocturnal ‘Geyser’, she retreats back into solitude, puzzled over what had happened. Again, with restraint.

Which goes back to the start of this review: the potency of music and its ability to communicate something bigger than a review like this could possibly express or decipher. Music journalists often expect artists to know the ins and outs of what they do, but sometimes, the answer is buried too deep within. And sometimes, there’s no answer at all. People don’t believe in dragons and lost unchartered worlds anymore, because we seemingly conquered both our myths and realities. So it’s hard to accept nothingness once you wholly invest yourself in something – even something as small as a dotted line at the end of a text message. Confusion isn’t something people are naturally celebratory in.

Which is a bit silly when you think about it, as there are plenty everyday things that can suspend our disbelief. Like for instance the colour indigo, which Fohr references on the album: even considering its scientifically undefinable frequencies, it is something we can still sense with our very eyes. There’s a strange comfort in realising this, as our notions of true and false distort more and more. Phenomena no human being will ever fully comprehend do still exist. And, funnily enough, these unknowns often lurk within ourselves. By exploring them through her own singular artistic lens, Circuit des Yeux aptly conceived one of those beautiful anomalies herself. Reaching For Indigo, indeed, is awe personified.