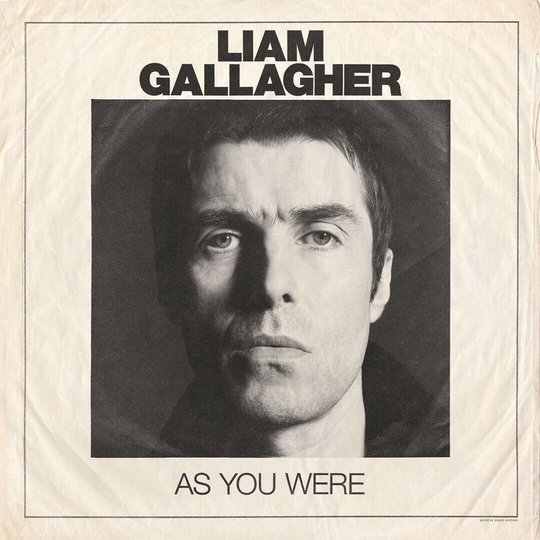 Will rock’n’roll ever die? Not if Liam Gallagher has anything to do with it. He’s the self-appointed guardian of the cocksure frontman, keeper of the flame, defined by attitude as much as talent and a belief that the world should bend to your will. He’s the last of the old school hell raisers, putting the world to rights and swaggering across what’s left of a musical landscape flattened by the Britpop wars and 'cocaine panzers'. "There’s too many so-called rock’n’roll bands in England getting away with fuckin’ murder," he recently told Noisey. "They should be ashamed of the shit they put out." Big words coming from the man who helmed Beady Eye, a band responsible for truly one of the millennium’s worst musical offerings, but then the one thing you could never accuse Liam of is self-awareness.

And so to As You Were, an album born out of domestic boredom as much as his rock’n’roll saviour complex. It’s a little odd to be releasing a debut solo offering 25 years into a career, but as he himself recently put it: 'This is the last fuckin’ roll of the dice for me.' Prevailing wisdom has it that this is the last thing music needs, that it would represent the final excavation of Britpop’s grave in a desperate attempt to find one last nugget of gold buried among the corpses of boorish, three-chord pub rock and #laddism. His previous when it comes to songwriting – "You live for your toys / Even though they make noise" – suggests he’s not the man to lead the search, although lead single 'Wall Of Glass' wasn’t terrible, and hinted that his writing had graduated beyond aimless metaphors and nursery rhymes.

Has he stepped out from Oasis’ – and Noel’s – shadow, and the train wreck that was Beady Eye? Is this a collection of songs befitting his status – deserved or otherwise – as one of the most iconic frontmen of a generation? Well, yes and no. For a start, it’s not really his; a third of the material here is co-written with Andrew Wyatt and producer Greg Kurstin. Two songs don’t bear his name at all. Unsurprisingly, the presence of such steady hands leads to As You Were’s most assured moments, even if they frequently resort to bolting together various Oasis trademarks; a wall of guitars here, some mawkish acoustic strumming there, and just a sprinkling of brass and harmonica. The feeling persists that this is a missed opportunity, an untaken chance for the younger Gallagher to stretch his imagination and really test his songwriting chops; Liam The Singer had an edge and air of unpredictability, but As You Were plays it far too safe to really thrill.

It’s a shame, as truth be told, there are more of those assured moments here than you’d expect. 'Wall Of Glass' harks back to the chin-up bravado the Gallaghers used to conjure so effortlessly while selling out arenas the world over. 'Paper Crown' and 'For What It’s Worth' have the misty-eyed quality of Noel’s best B-sides, when the fug of Sixties haze parts just enough to let diamond choruses shine through. Even 'Chinatown', whose chorus is lifted wholesale from 'Champagne Supernova', transcends its silliness just enough to be charming. These are modest highlights though, and the fact they stick out only underlines the shortcomings elsewhere.

Subtlety is an early casualty, lyrics and riffs hitting with all the grace and charm of a sledgehammer. Everything is turned up to "anthemic", but ironically for someone defiantly "having it large", the album’s most boisterous moments sees Gallagher floundering around within the tunes. 'Greedy Soul' keeps speeding towards the horizon, even when he can’t keep up; parts keep flailing off as the band keep the accelerator pinned to the floor. 'You Better Run' is even worse, a stomp as pointless as it is hilarious. "Angels, gimme shelter / Cause I’m about to fall / It’s all gone helter-skelter" he snarls, shoehorning not one, not two, but three rock touchstones into the chorus. And lest you be in any doubt as to his commitment, check out his live band; there it is, emblazoned in bold across the keyboardist’s stand. His guitarist won’t even take off his shades indoors while filming a radio session. Rock’n’roll stars indeed.

Of course, some might say none of that really matters. 2017 is the year that Liam Gallagher became a full-blown National Treasure. His normal-bloke-down-the-pub persona has long provided amusement alongside an endless stream of bon mots and zingers: Making tea!; getting the names of popular rappers hilariously wrong!; even flying, the most mundane of modern pursuits, has been given the full on Gallagher treatment. An endless war of words with Noel is just more fuel for the fire, keeping his name in the headlines and interest in his music high; I suspect that neither brother is all that upset by the countless news stories chronicling every barbed tweet and insult.

A dear departed colleague coined the phrase The Kasabian Defence to explain the never-ending popularity of stuff like this, and 100,000 tickets sold in little over an hour is not to be sniffed at. Consider the score below; depending on your allegiance, it could be almost anything. But all the goodwill in the world can’t disguise the fact that this particular well of nostalgia ran dry a good few years ago. "Are yer mad fer it?" Liam used to ask of thousands, bestriding stages like he owned them. That it’s all come to this just proves that it really is better to burn out than fade away.