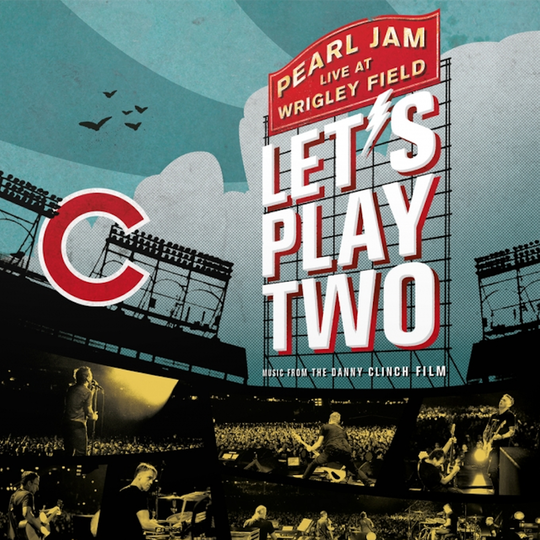 Is there anything more perfect than an eternal underdog story in sports? The Chicago Cubs made history in 2016 with a World Series win that ended their 108-year drought - the longest in the history of baseball. Of course among the Cubs perennial celebrity fans are the kind of lovable jock-ish rogues one would expect - former WWE World Champion CM Punk, professional Bill Murray impersonator Bill Murray and professional John Belushi impersonator Jim Belushi. Slightly more unlikely a fan is hometown hero Eddie Vedder of erstwhile classic rock/punk/folk/who-even-knows-anymore band Pearl Jam.

To mark this spectacular victory Vedder drew his troops to the home of the cubs, Wrigley Field, for, as the title would suggests, two nights of Pearl Jam in concert - playing to thousands of crossover Cubs/Jam fans.

A documentary team headed by Danny Clinch followed the band through the ball season and through the shows themselves and what we have here is a 17-song taster soundtrack to the film of the same title. While both concerts will be released as 'bootlegs' in their entirety (something the band have a long history with - once releasing 25 shows as separate bootleg CDs back in 2000), this is a skim across the surface of Pearl Jam’s back catalogue perhaps aimed at bringing in casuals who, at a glance, will recognise some of the titles and recall someone mentioning how earth-endingly awesome a live proposition they are.

So we get a sing-along, cry-along ‘Better Man’ pulled from ‘94's Vitalogy alongside a soulful ‘Elderly Woman Behind The Counter In A Small Town’ from the previous year’s astonishing Vs. ; a soaring ‘Given To Fly’ from ‘98's middling Yield; a couple of fan-favourite covers like Victoria Williams’ ‘Crazy Mary’ and The Beatles’ ‘I’ve Got A Feeling’ (what, no ‘Baba O’Reilly’? C’mon…) and of course a full run of the legendary moments from their debut album Ten - ‘Jeremy’, ‘Black’ and, yes, ‘Alive’. We also get Vedder’s solo song about the possibility of the Cubs winning the Series - 2008’s ‘All The Way’.

As a nod to the near-present we get the title track from 2013’s Lightning Bolt but it’s worth keeping in mind that the standouts here are largely of the 20-year-vintage or thereabouts. Surely at this point in time where the Seattle stalwarts are able to sell out arena tours almost entirely to members of their fan club on the regs it’s mildly irrelevant to see these same, oft-played songs served up as some kind of 'in' for potential newcomers? That’s not to say that if you fancy a taste of Pearl Jam this wouldn’t be a pretty sweet place to start - a set of memorable, passionate, punkish rock songs often with enormous fuck-off choruses performed perfectly to a dedicated crowd. It’s a great set, for sure.

The parallels between the Cubs and this uncompromising band often hit hard by tragedy both personal and financial are clear. Both went through a long period of being considered something of a joke by their peers and press while only their hardcore fans appeared able to keep them afloat (evidence of the relationship between band and fans is shown beautifully here on the intro to 'Release'. Check it). Both struggled on regardless and earned their spot at the top of the tree or thereabouts. But of course, music isn’t about winning it’s about expression, communication and revelation and that’s where Pearl Jam, now 25 years into their career and recent Rock n’ Roll Hall Of Fame Inductees (Jesus, how old are we?) excel and are, arguably, unique.

Their earnest, transportive music causes acid reflux in some, a look of pity in others but, in some of us, it causes a skin-tingling rush, a chest filled with pride rather than bile, a sense of inspiration and hope that very few artists can bring.

One would expect the documentary film and the bootlegs of the full shows to be something considerably more substantial than what we have here but as a sketch, a note of what this band and their vocalist’s sporting heroes have achieved it’s certainly worth your time if you’re that way inclined. While Pearl Jam may not have an eternal underdog story they certainly have one of striving, struggle, excellence, acceptance, victory and defeat - a story worth telling to which the songs here form valuable chapters.