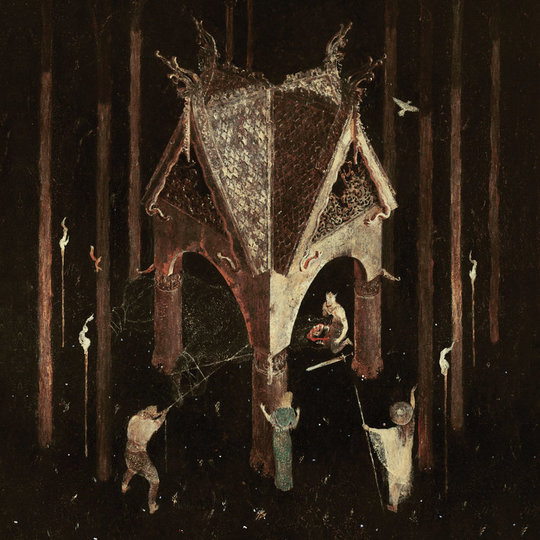 It may be hard to remember now, but there once was a time when Wolves in the Throne Room were considered rather controversial. Black metal, for all its iconoclastic tendencies, has never been a genre renowned for giving newcomers an easy ride, and its certainly true to say that the Olympia, Washington band were awarded a divisive reception from the scene at large. They have been derided by some for a supposedly pretentious level of concern for the environment, and by others for a perceived dilution of black metal’s core sonic properties. These, rather tiresome, criticisms, were swept away by the time the band (composed chiefly of brothers Aaron and Nathan Weaver) unveiled their fourth full-length, Celestial Lineage, in 2011. One of the most devastatingly effective black metal records of recent times, it silenced many a doubter through its sheer conviction.

The same could not be said about its follow-up, 2014’s Celestite, a pleasant but ultimately rather unsatisfying ambient work that was more Tangerine Dream than Trelldom. It was a pleasingly confident move for a band that had just won over many of their former critics in a notoriously hard-to-please scene, but not one that seems to have had a significant impact. Three years on and the Weaver brothers appear to have a new project, Drow Elixir, to showcase their ambient interests. Wolves in the Throne Room have moved back to black metal, and Thrice Woven arrives on the back of an enormous wave of expectation, one that appears both to have forgotten Celestite and any past misgivings about the band’s status as one of the foremost black metal acts on the planet.

Stylistically following up on the increased sense of grandeur present on Celestial Lineage, Thrice Woven is sure to satisfy those who have waited six years for its arrival. Like many of the other participants in the Cascadian black metal wave they helped start, Wolves in the Throne Room’s sound has expanded outwards since their early days. The cold, frostbitten elements that those of us conditioned by the Norwegian bands of the early nineties have come to expect are mostly absent. Instead there is a certain degree of warmth to the band’s sound, aided a great deal by the grandiose synth backings present throughout. Even at the album’s harshest, most overtly metal moments, Wolves in the Throne Room conjure up images of Washington’s pine forests at sunset, rather than of the snow-covered fjords and mountains often (lazily) assumed to be black metal’s main landscape.

At its strongest – the colossal ‘The Old Ones Are With Us’ stands out – Thrice Woven is one of those glorious black metal records that creates a world around it. It’s an immersive listening experience, the band’s colossal guitar sound (aided by guitarist Kody Keyworth, who is now a full-time member of the group, alongside the Weavers) operating as the borders of a distinct and fully formed sound world. Much like when the band play live, there is something hypnotically engaging about Wolves in the Throne Room. Too many black metal acts are prone to uneven songwriting and, perhaps even more problematically, rather haphazard (or non-existent) editing. These problems, present to some degree on Wolves in the Throne Room’s first album (Diadem of Twelve Stars), are nowhere to be seen here. Thrice Woven’s forty-three minutes absolutely fly by. It’s a whirlwind of a journey.

Whether this is actually the band’s finest work to date or not (one senses that only time will tell), Thrice Woven proves beyond any remaining doubt that Wolves in the Throne Room are one of the – if not the – finest black metal acts on the planet today. This is a record of confidence, maturity, and style. It doesn’t break any boundaries, and it’s not a reinvention of the band’s sound, but it is spectacular proof of black metal’s continued power and effectiveness. Not quite a milestone then, but a release that’s set to be remembered for a very long time to come.