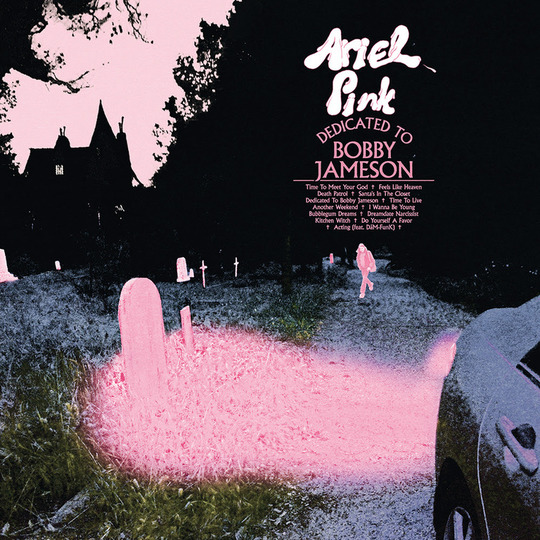 Bobby Jameson is just the sort of semi-mythical Los Angeles cult figure upon which Ariel Pink has modelled his career. A lifelong recluse, Jameson was a denizen of the underground, a self-appointed bullshit-fighting matador, an observer and mutator of the high and low-brow in the City of Angels, but for 35 years he was presumed dead. It was only in 2007 when he posted a series of YouTube videos and blogs that the truth of his life was finally told. Pink, for one, was captivated.

It follows on from stories like those of The Shaggs and R Stevie Moore that have come to define the Ariel Pink aesthetic – a rejection of the norms and safeties of rockist traditions, and instead a bloody-minded pursuit of one’s own individual impulses. It is what has taken Ariel Pink this far, to his eleventh full-length album, to a place of rare acclaim and adoration in the modern independent music landscape. His first outing for Brooklyn label Mexican Summer, Dedicated To Bobby Jameson is every bit as warped and haphazard as his followers would hope.

It follows on from his sprawling 2014 opus Pom Pom, but this time he opts instead for a more streamlined, 45-minute runtime. Ariel has suggested in the press surrounding the album that the entire record is a single, holistic piece in tribute to Jameson, but in truth only a few of the songs appear to bear relation to his life. With the surreal, off-the-wall wackiness of Ariel’s non-sequitur storytelling a joy in its own right, it isn’t worth stretching allegories too far to force a fit with the Jameson story.

Opening track ‘Time to Meet Your God’ may allude to Jameson’s extraordinary resurrection tale, however. Driven by home-spun synth lines that recall his early demos, it bursts in and out of life at will, repeats lines until they lose their meaning, and still probably counts as one of the album’s more straightforward cuts. In truth, only the title track deals directly with Jameson directly: “He was a Tinseltown tranny and mayor of the Sunset Strip” Pink sings, enviously, burying the lead under a blanket of hyperactive trebly production.

Ariel never has been a compromiser and his records continue to resist radio-friendly, unit-shifting tendencies. In others’ hands, these tunes could be fanned and cultivated, guarded until they blossomed into ornate, stately chamber pieces. But not so Ariel Pink, he keeps the rough edges and imperfections: the essence of the polished product is there, and on repeated listens you might begin to produce it in your own heads anyway. The most densely packed track is ‘Time to Live’, layers of imposing bass guitar piled upon layers of panicky, synthetic keys, with occasional wordless vocal shots firing out and Ariel eventually serenading us with an entreaty to seize the moment to live you best life while it’s still an option. The influence of his earliest labelmates Animal Collective is still evident too, especially on a track like ‘Kitchen Witch’, with its head-spinning, psychedelic whirl, and there is an obligatory moment in every Ariel Pink album when he unleashes his inner Prince, here coming with the somewhat poignant ‘I Wanna Be Young’.

As ever, Ariel sprinkles reminders throughout the album that he is, in fact, one of the great melodists of his generation. ‘Another Weekend’ is an example of him letting the white angel on his shoulder take the reins for a few minutes, and the crystalline harmonies that appear to arrive so easily into Ariel’s mind are allowed to run free. The song is a tale of regret, as he once again labours on his current subject of obsession, the god-damned difficulty in enjoying the life that lays in front of you. It isn’t the only pop explosion on the album: ‘Bubblegum Dreams’, as the title suggests, is a gay old time, a marching Glitter Band stomp of a tune that smacks of The Vaselines’ 1987 classic ‘Son Of A Gun’. One can’t help but wonder what a full-on Phil Spector-produced Ariel Pink album might sound like. Maybe he could do the next Muppets soundtrack?

As it is with The Fall, just reading through the tracklisting of a new Ariel Pink album can be an absolute joy. This time around we get ‘Dreamdate Narcissist’, ‘Death Patrol’ and the brilliant ‘Santa’s In the Closet’, which features the unforgettable lines, “Santa Claus is in the closet/Santa’s in the water closet/Taking off his leotard”. There are countless other such Dadaist snippets throughout the record. The album’s only credited guest arrives in the form of fellow Californian Dâm-Funk on the thrusting closing track ‘Acting’, with Dâm’s trademark electric synth bass combining delightfully sleazily with Ariel’s funk guitar. In one sense the song stands out, but can anything really seem out of place on an Ariel Pink LP?

Casual listeners and new visitors to the Ariel universe may find this all a little too incoherent and muddled to fully embrace at first, but the riches are right there under the surface. For the already acquainted, just kick back and enjoy. We’ve waited three years for this.