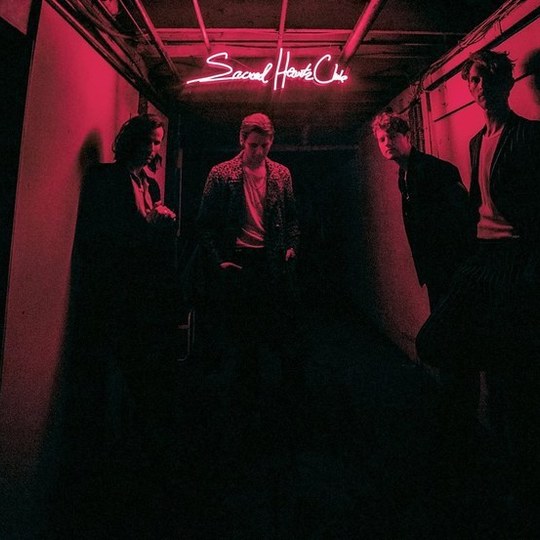 I imagine, in this vacuum where critics appraise albums, that we often fail to predict what will happen when the music leaks into the wild. Like, could the first reviewer who caught wind of ‘Uptown Funk’ have possibly foreseen its wildfire spread, so rampant that professional cover bands STILL whip it out at weddings two years on? Could the first ears who melted for Rihanna’s ‘Work’ have possibly heard the squeals of delight whenever the DJ bumps that vibe on the dance floor? The more stodgy writers might tell you that public opinion should hold no sway over the battleground that forms between their headphones, but I’m not so sure anymore. Music doesn’t happen in a vacuum.

As a writer with a bent for fiction, I could easily invent a late-night lounge called The Sacred Hearts Club, and attempt to picture what would transpire. Only women would cling to the gunmetal stage, while onlookers in the back would nurse glowing neon cocktails; somewhere in the middle would be 50 ecstatic kids who don’t even think about albums, bobbing and dipping and nodding to slick new sounds. They came for ‘Pumped Up Kicks’, but they can get down to this. Their high school anti-hero idols have morphed into boy band phenoms, and somehow 'sellout' doesn’t cross their minds. The obtuse irony that ‘Doing It For The Money’ mimics N’Sync at their platinum-selling peak soars over their slow-dancing heads.

But what I can’t see – and what I’d gladly pay the exorbitant ticket price to witness – is when the lights dim, the girls up front unsheathe glow sticks, and Foster the People try to ignite an all-out rave. All those baffled faces – would they consent and nod? Shuffle awkwardly? Hiss and boo? The fact that I can’t see this intrigues me. The added oxymoron that the lyrics touch on paranoia in crowded spaces, like the antithesis to ‘Turn Down For What’ (“I’ve got my hands up in the air, saying I can’t breathe”), intrigues me even more.

See, it’d be easy to write off the R&B gloss and borrowed beats in Sacred Hearts Club as unwanted decór - ‘Sit Next To Me’ does make one wonder how many degrees of cool now separate Foster The People from Maroon 5, for instance. But check the album cover, yo – the kids are growing up from their indie rock roots, and they’re thinking even more about how music functions in their fans’ lives. And while I can see plenty of purists holding their noses, what they’ll miss is precisely what, say, Grouplove also never grasped: that in the crushing bustle of big parties or summer escapades, some folk drown. And, to some extent, Sacred Hearts Club not only recognises those lost souls, but extends hands and pulls them in.

‘I Love My Friends’, perhaps the grooviest analogue to ‘Pumped Up Kicks’, describes those aimless acquaintances that studious busybodies might recognise – the kind that go off daydrinking on weekends and always screw you over with their careless negligence. The crazy catchy, Strokes-ish 'Lotus Eaters' depicts the hapless introvert stuck in a masquerade of empty gestures, and his desperate flight out (“I’m sorry I was late, I didn’t want to come”).

For those crowded or neglected souls, Foster the People offer balm. Both 'Sit Next To Me' and the very Phantogram-esque roll of ‘Harden the Paint’ present sensitive boyfriend-type protagonists, just as eager to back off as they are to spark romance: “we can see where things go naturally / just say the word and I’ll part the scene”. It’s a gossamer thread in a dense, radio-friendly haystack - but tug hard enough, and you’ll realise that Foster cares way more for your mental health than for any artistic merit.

In the end, Sacred Hearts Club isn’t so bold a departure as others might think. Foster’s probably been dying to write a record like this for years – and, y’know, so long as he continues to write from ever-so-slightly selfless angles, he’s welcome to push his crew wherever he pleases. Subtract the saccharine throwback 'Static Space Lover', the utterly somnambulant closer 'III', and the ancient prom scrap 'Time To Get Closer', and you’re left with some solid pop bangers that can sync in time with yr racing heart. The question is – will old fans embrace Foster with the same enthusiasm that he embraces them? I don’t know. And that makes me giddy.