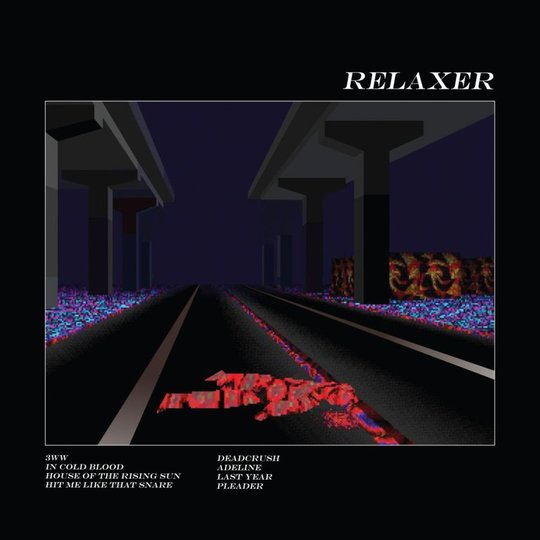 OK. So there is a house in New Orleans, right? Place of sin and misery and the ruin of many poor girls and boys, right? Whether or not this house actually exists or not is moot, for the symbolic nadir that imprisons the working classes – the drunkard’s tab, the gambler’s impulse, the prostitute’s contract - never goes away. Thus, from the backwoods of Kentucky to the streets of London, from Lead Belly to Nina Simone to Dolly Parton, “House of the Rising Sun” persists – and most times, could still scare you stiff into sobriety. Even Parton’s country-come-to-town crossover hit stressed the caution in the tale: get an honest job, or else stagnate in debt.

Oh, but where are my priorities? We’re talking, after all, about alt-J – the keystroke that yields ∆, the genre-waffling dudes that won a Mercury prize with their debut album and sampled Miley Cyrus for their second, and a favorite pincushion for heat-seeking music writers. Why should we tangle this new album, Relaxer, with class dynamics and the 'House of the Rising Sun'?

Well. To be blunt, I’m on the fence about this one. That’s because, as on An Awesome Wave, alt-J present two faces to us: the somber, Nick Drake-leaning acoustic balladeer, versus velvet-crushed crowd-pleasers with the wild-eyed soul of Cold War Kids and the thumping heart of the Black Keys. Which, if you described lead single 'In Cold Blood' to me in that fashion, I’d be like 'yeah, nah'. But hot damn, what a towering fanfare of a single, as shamelessly stadium-sized as Imagine Dragons or Adele, yet replete with such enigmas as the recurring binary code sequence and the kooky synth lines.

Likewise for 'Deadcrush', hands down the sexiest slab of a bass line alt-J have ever devised, but with lines like “I don’t believe in a maid of honour (now would be the first time I’d believe that frontman Joe Newman had a massive Spice Girls crush in his youth – Baby Spice, to be exact). And then there’s the deranged garage rock banger 'Hit Me Like That Snare', an unhinged (read: horny) stab at Clinic-esque oscillation that certainly spanks you silly with its kinky implications, but still rolls in like the life of the party (even if you wanna strangle him sometimes for talking above everyone else).

Now, the crux is: that’s the half of Relaxer that I can live with, the half that strives actively to dispel alt-J’s pretentious front and swing for the top of the charts. But then, my friends, we return to the 'House of the Rising Sun' – because here, on this wikkle precious cover version with the cyclical Leonard Cohen guitar, we’re reminded of every reason to hate the three blokes. To my knowledge, it’s the only version that deflects the story away from the storyteller (“oh Lord, my father was one”), and slams the brakes on the harrowing cycle of sin; three valuable spaces for lyrics are usurped by the redundant refrain “it’s a happy, happy, happy fun day”. In alt-J’s hands, the working man’s morality tale melts into a glossy, sepia-tinted postcard that undercuts the original narrative of struggle and despair.

See, once you’re stung by that, you start to mistrust every other 'folky' endeavour on Relaxer. Fuck 'Adeline', we don’t need another ballad addressed to a girl that a dude fancies; and fuck 'Last Year', or at least the (literal) funeral dirge in the first half that agonises over the mundane; and especially fuck that other single, '3WW', which tries to make colonialism romantic (“I just want to love you in my own language”). For all their clever allusions and grandiose ensembles, alt-J really ARE just your average, self-serving pop stars, that project art as a limelight upon themselves rather than hold it like a mirror up to the world they’ve experienced. Even their retooled website – a simulation of a simulator of a dream, in which you can walk around and find images of the band and their gear – reinforces this approach, of reducing art to ornament.

“I don’t subscribe to your cultural norms, taunts Newman on 'Hit Me Like That Snare'. But the very phrase shelves alt-J neatly among their fellow millennials as devotees of the individual age, concerned more about their aesthetic and wit than any true means of expression. So, yes, there is a house in New Orleans – they just tore it down, renamed it SunRïs, and now offer white chocolate macchiatos in recycled cups with a tiny synopsis of the building’s history on the sleeve.