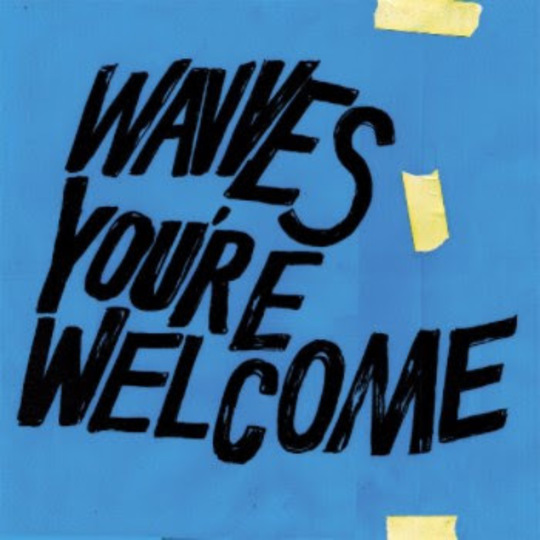 No one really talks about it anymore, but it still seems like only yesterday when a drunk Nathan Williams stood on stage at the Primavera Sound Festival in Barcelona and had an epic public breakdown, causing not only the concert goers to pummel him with bottles but media outlets to do the same with metaphorical daggers, declaring that we had seen the end of Wavves before they had a chance to properly ascend.

At the time it appeared that Williams and his band had flamed out after only a year of stardom and critical blogosphere praise. But the reason hardly anyone talks about the little Barcelona incident anymore is a testament to what Williams has managed to accomplish in the ensuing years. Wavves rattled off a string of sensational music that forced previous detractors to take him seriously: King of the Beach, the Life Sux EP, Afraid of Heights, and V, the latter of which was an unsuccessful plug by Warners to introduce Williams and his bandmates to the mainstream. Wavves has come a long way from being derided as neo-Blink 182 rip-offs and carved out a lane of their own, one that has continued to widen with their latest release, You’re Welcome.

You’re Welcome is the first album released under Williams’ new self-owned blueprint, Ghost Ramp, a label and merchandise store that Williams established with a little help from his friends after his rift with Warners. Williams’ newfound entrepreneurial spirit has not dampened his artistic fervor however, and his latest release shows signs of growth while not sacrificing the roots of what made the band indie godsends in the first place. The first track, 'Daisy', has tinges of The Beach Boys’ circa their Pet Sounds and Smiley Smile period, with a hint of psychedelic tones and punk rock to exacerbate the effect. But arguably Williams’ most precious gift is how he coos and hums at precisely the right moments, recalling the past angelic-like crooners of the late Fifties and early Sixties, like during the bridge of the intensive “'You’re Welcome'. A novice musician would be content with a palpably catchy song, but Williams works through every crevice in meticulous detail to exhume the most out of every chord.

Williams’ growing confidence is glaring throughout the record. He is far from the wily kid making lo-fi records in his mother’s basement, but still retaining the untamed angst of what made 'So Bored' and 'No Hope Kids' perennial indie gems. The gut-punching essence of 'Million Enemies' sounds like a mixture of Richard Hell and The New York Dolls, with a touch of hip-hop flavour laced by the smooth drum-kicks of Brian Hill. But Williams’ maturation is not just manifest on a sonic level but a conscientious one as well. On a breakneck instrumental, Williams touches on fake news and the subsequent issues individuals are facing under the Trump administration. The political version of Williams is new territory as the bulk of his catalogue, whether dealing with hangovers, depression, or good vibes has dealt with matters revolving around his own personal purview. Although not concerning political matters, 'I Love You' is another departure, a raw confession of real, unfettered love, a topic Williams has only spotlighted at the surface level in the form of slight romantic dalliances, like on King of the Beach’s 'Baby Say Goodbye'.

Accompanied by guitarist Alex Gates, bassist Stephen Pope, and drummer Hill, Williams invokes the spirit of Brian Wilson’s harmonic compositions with the experimental flourish of Brian Eno to imbue the songs on You’re Welcome with a myriad sound. The melting pot of influences is felt on such songs as 'Come to the Valley', where a carnival-like procession meshes well with the melodic vocals. But 'Under' might be the real crux of the album, commencing with hushed, simple Williams’ solos before morphing into a loaded explosion of warbly percussion during the chorus. It is this gift for sonic transformation, manipulated at just the right angles, that makes Wavves’ synthesis of surf and punk rock so absorbing. 'Dreams of Grandeur' is equally realised, with Williams and his cohorts linking a lo-fi ambience to punk-infused, spirited wails. The lyrics themselves display a newfound maturity as well, with the frontman providing much more thought-out poetics than past releases.

Nathan Williams is nothing if not consistent. Ever since he first burst on the scene, Wavves has routinely supplied the masses with music that – while evolving – never loses sight of their core bearings. With Williams now 30-years-old and still making what was once dismissed as skateboard rock increasingly appealing, it’s intriguing to see what heights the band will trek in the future. For now, You’re Welcome is a welcome addition to Wavves’ discography, and achieves a range of maturation, both sonically and topically, that Williams has not previously exhibited.