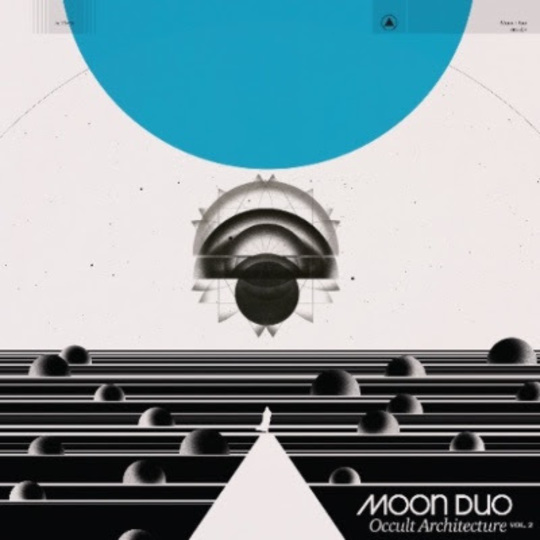 The release of Moon Duo’s fourth album, Occult Architecture: Volume 1, was a timely and important response for the Portland-based duo back in February. Often choosing to follow a familiar, tried-and-tested path, Moon Duo have sometimes struggled to emerge both from the shadows of Wooden Shijps and from the psych bands who inspired them. Where Spacemen 3 and Silver Apples regularly veered off course to dizzying effect, Moon Duo became noted for a more linear career trajectory. Sure enough, they had their moments on Circles, but variation was never their strongest point.

How welcome then, was Occult Architecture: Volume 1, back in the depths of a long winter. Brooding and hypnogogic, Erik ‘Ripley’ Johnson and Sanae Yamada created a dark sonic wilderness of an album inspired by winter landscapes, gnostic literature and the Chinese concept of yin. The krautrock and psych space jams they’ve so often blended sounded more balanced and cohesive, something helped in part at least by bringing long-time tour drummer John Jeffrey into the Moon Duo recording mix. Mixing Can-like percussion with funk inspired electro acoustic beats, Jeffrey helped Johnson and Yamada to delve into darker spaces musically – a place where Moon Duo have arguably always been at their most interesting.

Structurally, the decision to release an album across two volumes and two separate release dates was also an interesting move. 'The concept of the light/dark, two part album came as we were mixing and recording the songs,' explains guitarist Johnson. 'Beginning in the dead of winter and continuing into the rebirth and blossoming of spring, there’s something really powerful about the changing of the seasons…[and] its physical and psychic impact on you.'

'We’re releasing them separately to allow them their own space, and to ensure clarity of vision,' keyboard player Yamada explains. 'To that end, we also mixed volume 2 separately, in the height of the Portland summer focussing on its sonic qualities of lightness, air and sun. Listeners can ultimately use the two volumes individually or together, depending on circumstance or the desired effect.'

After such a strong volume opening, there’s undoubtedly anticipation over Volume 2, particularly with Moon Duo venturing into their less explored lighter side. At just five tracks long, compared to Volume 1’s seven, Volume 2 strangely feels like the longer of the two, despite it being almost eight minutes shorter. Three of the songs are between seven and ten minutes long and make for laboured listens and sadly, the lack of song variety doesn’t really fit in a volume that’s meant to reflect lightness.

Two of the songs on Volume 2 easily match the quality of those found on Volume 1. ‘New Dawn’ opens with a cool psych synth stutter – perhaps bridging the gap between the darkness of winter and the new life of spring – before bursting loudly and joyously into life. Jeffrey’s loud drumming against the grungy synth are lightened by breezy, trance-like vocals. Long, scratchy Johnson solos bring further air to a track that breathes life beautifully into the album.

‘Sevens’ is another excellent song. Cramps-like, its riff will stay with you long after the song ends as Johnson’s predominant vocals breeze alongside vibrant synths in an ode to spring, light and love. The addition of Yamada’s vocals on the bridge lifts the song into even lighter territory and it’s a striking, dynamic juxtaposition to the darkness on Volume 1.

For a time at least, it felt like Moon Duo had found a different path and enjoyed the journey. But it’s sadly short lived and for the rest of Volume 2, Moon Duo lose their way. ‘Mirror’s Edge’ is a weak, repetitious instrumental with no evolution and little direction. It spins around in one long, frustrating circle for what becomes a very long seven minutes. ‘Lost in Light’ isn’t much better, being built in entirely the same guise. It clumsily bursts open like something from Jollification, all tambourine and bells, before Johnson’s trippy vocals appear and feel uncomfortably mismatched to the musical layering underneath. It feels like an emo kid has been kidnapped and forced to wear a bright jumper.

‘The Crystal World’ thankfully brings things back; it’s a tribal call to arms a bit like Air’s ‘Sonic Armada’ in terms of content rather than style all supported with cohesive percussion and synth. Yet it’s a strange fit for a volume that is supposed to represent lightness – if anything, it’s darker tones might do better on Volume 1.

Seven years in then, Moon Duo are clearly still on a journey. They need to keep exploring, but I suspect they’re at their happiest and creative musically when they’re still exploring those darker territories.