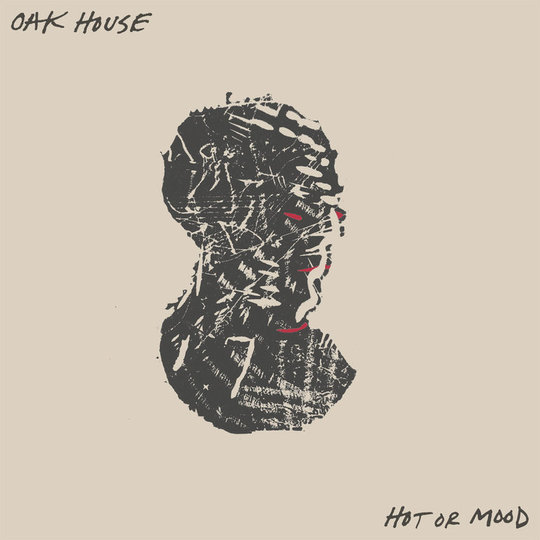 If there’s a better, more rounded, more emotionally-resonant song than ‘Esque’ released this year I will be deeply surprised. If there’s an album which arrives seemingly as if from nowhere and has the same impact on me this year, I will be surprised. If there’s a better indie-rock album released this year I will be surprised. If Hot or Mood, the second album from Oak House, a three-piece from Athens, GA who specialise in controlled chaos of the most sumptuous sort, does not end up on multiple end of year best album lists, I will be appalled. Do you get the idea yet? This record is great. It is spell-binding, it is huge-sounding. It’s the kind of album an American Radiohead might have made instead of Hail To the Thief all those years ago and, as a follow up to Oak House’s debut, Plastique Cash, it shows a band of unbridled ambition, sonic scope and potential truly stepping up to become one of their genre’s foremost exponents.

Just listen to the way that ‘Damp Eyes’ builds from a gentle opening to a squall of grungy thrash as frontman Gresham Cash roars a repeated refrain which sounds like “Heaven’s gate won’t let me in”. Connor Sabula’s rolling bass and the first showing of Wes Gregory’s storming and inventive percussion sets the album’s stall out with a very high bar, one from which it barely dips. ‘Reticence’ features some gorgeous guitar work and some clever dynamic work as Gregory’s toms and ride cymbals are used to full effect. ‘Spirit’ slows things down as Cash intones “Spirit of the living God, break my heart and make it stop” and ‘Cut That Out’ shows the range of the band and the synergy of their partnership with engineer Drew Vandenberg to full effect as the tone on virtually every instrument shifts entirely for a brighter, more driving track.

But it is on ‘Esque’ that the record makes a full, final jump from ‘very good’ to ‘great’. It has everything. Compositionally intricate and ambitious, yet wholly accessible, the first third is driven by some of the farthest out-there guitar effects I’ve heard in some time. In its mid-section, a sombre piano figure is the primary feature, while the latter third is a fantastic jam piece which starts in 'Karma Police'-territory and expands a million miles beyond that as layer upon layer of guitar is piled atop some fantastically-elastic bass work and a drum part which is just loose enough to let the listener know that control could be lost at any moment. And then, all of a sudden, it stops. And you want to listen to the song again and again and again. Fiendish and beautiful.

After that, ‘Seventeen’ and ‘Mundane’ have a lot to live up to, but they manage it. Both show the band’s mastery changing direction, mood texture. As Cash screams “I tried to make my mind like money” and latterly “I tried to make my life less mundane” it feels impossible that a mind that could form part of the creation of music as satisfying as this could ever have been anything close to mundane.

Elsewhere, ‘Song of Myself’ builds from a similar start to ‘Spirit’, all unsettling piano and chordal dissonance to a cacophonous climax. ‘Around the Room’ is a fast-paced rocker full of echo and foreboding and closing track ‘Spring’ feels like the track where the band finally loses the plot (positively) as a smorgasbord of musical ideas are thrown against the wall, guitar leads compete with each other for attention, cymbals are the primary percussive instrument at points and the punishing climax “All your memories are dreaming” feels like Hot or Mood’s ultimate moment of final satisfaction. When the driving 6/8 kicks in, I defy you not to let go and let your limbs tab, stamp and follow where the band is leading.

This is the only album of 2017 so far, barring Army of Bones’ debut, which has truly impacted, affected and stayed with me. There are so many layers. There is so much depth here. Yes, you could dismiss the band as a grungier, indie-r Radiohead, but do so would be missing the point entirely. Here is a local independent band making their first proper steps on the international stage. As they do, they should find the world at their feet.