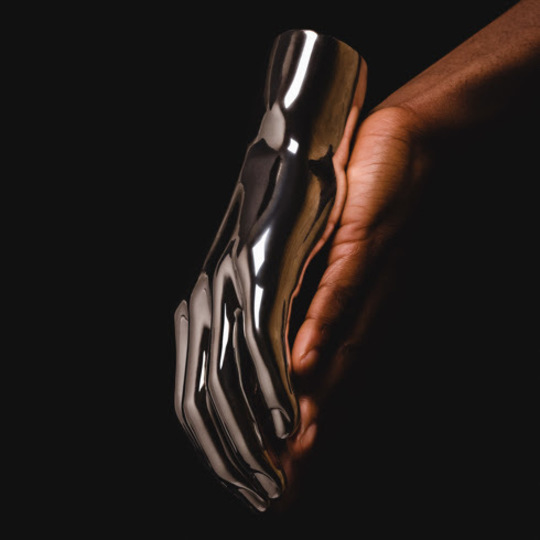 Darren Jordan Cunningham is a man with a lot of fingers in a lot of different pies. Producer, label boss, remixer and DJ he is better known under his Actress guise, though it isn’t his only moniker. In 2014 he released Ghettoville, a remarkable piece of music full of dark and brooding basslines and skittering breakbeats. After its release it was speculated that he had retired Actress from active duty, to focus on other projects. But this year sees Actress return with his most interesting, but complex album to date AZD.

The first impression of the contents we have is the album’s cover. In front of a pitch black background there is a single human hand, but is it holding a life-size chrome hand. The eye is immediately drawn to the shiny hand, but what Cunningham is telling us is that throughout AZD there will be points of light shining in the gloom. When you start to listen to the record – its name is pronounced AZID – you realise that Cunningham has created 12 songs that mix abstract noise and complex synth noodling, while underpinning everything with a love of classic Detroit techno. This is abundantly clear on the second track ‘Untitled 7’. Cascading synths fall around us, while the bassline slowly builds tension for a few minutes until classic techno breakbeats explode, transforming ‘Untitled 7’ from a Vangelis homage to a love letter to Phuture, while never losing sight of his harrowing world view. ‘Fantasynth’ could be the most immediate track on the album. Following on from the ideas on ‘Untitled 7’, it wastes no time getting to the point, as its opening salvo of techno breakbeats is par for the course throughout its five minutes duration.

‘CYN’ is Cunningham’s take on city living, as it spells New York City in reverse. The juxtaposition of cut up organic vocal samples and hard electronic noises is one of AZD’s highlights. ‘Runner’ sounds like a chilling remix of New Order’s classic ‘Blue Monday’. All of the poppiness has been stripped away and all we are left with is a small section of its iconic bassline, while industrial noises and minimal synth loops fill in the gaps, making ‘Runner’ both claustrophobic and gregarious. This could very well be a metaphor for Actress. There is one hook to grab onto for dear life, while all around us swirls harrowing synths and wonky breakbeats. But it’s also incredibly enjoyable. Through this murky fug we are shown a world where harrowing things happen, but in the middle of it is a sublime beauty. Through the darkness there is a faint glimmer of iridescent light reflecting off something shiny. A chrome hand comes into view that, eventually, leads us to safety. ‘Faure in Chrome’ opens with a glorious string section. It’s fresh and the strings gently float above what sounds like an old 56k dial up modem that is being tortured. It’s abrasive, but there is an alluring beauty to it.

On AZD Actress has created an album that is full of analogue synths, reminiscent of electronic pioneers more out there and minimal workouts from the Seventies. These workouts are airy, but there is a level of complexity and claustrophobia makes them challenging and broody. However they contain glitchy and skittering techno breakbeats that keep them moving forward. And it’s this juxtaposition that makes this album a tour de force. As a body of work it is similar to the late Carl Crack’s almost forgotten debut album Black Ark. Like that album AZD feels like a living soundscape full of inventive arrangements, abstract sojourns, techno flourishes and a splash of musique concrete. AZD is an album you have to digest in full rather than dipping in and out. If you put in the effort this is one of the most rewarding albums of the year so far, but like pronouncing its title, don’t be surprised if you don’t get it first time.