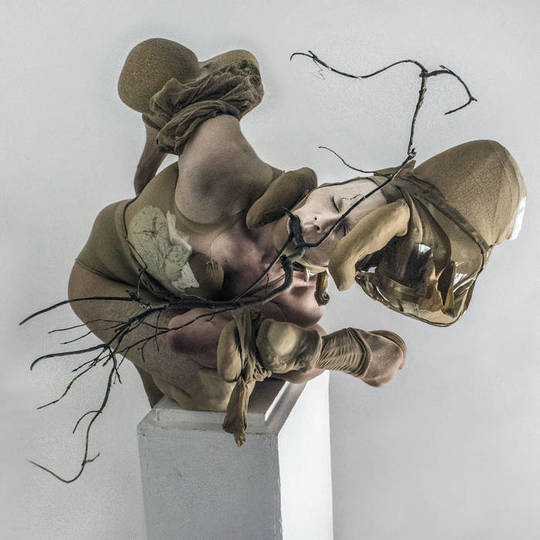 Articulate as Spectres may be, but the word 'compromise' doesn't enter into their vocabulary. Which is just as well. Because when it comes to pushing the boundaries of sonic resistance they're one of the most confrontational acts on the planet right now.

Not just by way of their music, which isn't just an uneasy listen, but often an unsettling one too. But also their ability to question the conventional norm and upset the mainstream applecart on more than one occasion. Most recently by way of a spoof photoshopped Spotify advertisement which challenged the minimal royalty rates paid by the streaming service to participating artists. While unlikely to endear them to daytime television or Radio One any time soon, it's made people take note and pay attention.

Which is just as well because Spectres wouldn't have it any other way. Having been an integral part of Bristol's vibrant underground scene for the past five years – not to mention 50 percent of the band being responsible for creating revered independent Howling Owl Records – Spectres' status as innovators in one of the most creative regions on these shores is all but assured.

Their debut, 2015's Dying, proved to be a coarse exercise in experimental noise rock that made anyone who'd previously mistaken them as shoegaze revivalists eat their own words in the process. Intense, brutal and relentless in equal measures, it served as a kick up the backside to many of the band's peers who'd spent a lifetime resting on their laurels.

So it shouldn't really come as a surprise that Condition takes that template - if one ever existed - then bleeds it to death before prodding at its decomposed remains from every angle. It's hard to envisage what goes through Joe Hatt and his three accomplices' minds when arriving at songs with such desolate titles as 'The Beginning Of An End', 'End Waltz' or 'Coping Mechanism' but it sure as hell isn't pretty.

Harsh swathes of mechanical noise greet the listener from the outset. Opener 'The Beginning Is An End' is as uncompromising as we've come to expect from the West Country's finest exponents of sonic terrorism. 'Rubber Plant' takes an even more abrasive stance where guitar strings have the life scraped out of them while Andy Came's percussive interludes run the death march through its soul. Lead single 'Dissolve', already the most aggressively disturbing eight minutes of music set to tape in 2017, acts as an early centre point for the album. Menacingly executed, its slow building musical arrangement reminiscent of a prisoner being led to a torture chamber while metallic objects clang unceremoniously in the foreground.

If you're Spectres and going to write a song called 'Neck' chances are it won't be a simple lesson in human biology. Instead it's a vitriolic slab of brutal noise that doesn't hold back for the entire duration. "Sometimes I wonder..." declares Hatt on 'A Fish Called Wanda', possibly the first song to ever be named after the John Cleese movie. That it has little to do with the script shouldn't come as a shock. Delivered with a brooding intensity that's become Spectres' forte, it serves as an exercise in controlled intimidation via the medium of sound.

'Welcoming The Flowers' and 'End Waltz' continue Condition's relentless desire to bludgeon the senses, while 'Colour Me Out' and closer 'Coping Mechanism' both reveal themselves as epic maelstroms of sonic bliss. The former acting as the deceptive calm before the latter's incendiary storm brings the record to a sedentary end.

Condition should come with a label on the front advising "Approach With Caution". However, its creators' intransigent desire to confound and confront should be applauded. Spectres: simply one of a kind.