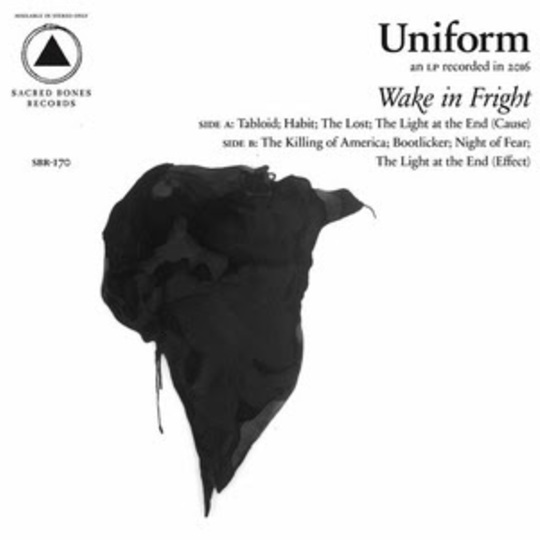 New York City duo Uniform have returned, 18 months on from punishing debut record Perfect World, with a second effort that makes their previous effort sound positively uplifting. Wake in Fright, a title that perhaps captures the feelings of millions of Americans on the morning of 9 November last year, is a corrosively violent start to 2017. Vocalist Michael Berdan sounds more ferocious than ever (readers familiar with his former band Drunkdriver will know this is no mean feat). Guitarist/programmer Ben Greenberg, meanwhile, seems more intent than ever on simultaneously channelling the spirits of Steve Albini and Dominick Fernow (sometimes Kerry King and Richard H. Kirk seem to be present too).

On first listen this is a thrillingly visceral mix. Wake in Fright is the record people confused by Wolf Eyes’ assertions of being a 'trip metal' band have been waiting for, rekindling the nihilistic psychedelia at the heart of industrial and marrying it with unrelenting Converge-esque metallic hardcore. The Godflesh-gone-thrash drum programming doesn’t hurt either. Its 28 minutes fly by in punishing fashion, leaving listeners sprawling in the dirt by the time horror-sampling ‘The Light at the End (Effect)’ brings events to a close.
br>

Second or third time around it becomes clearer that Wake in Fright, for all its full-throttle savagery, is a slightly more multi-faceted beast than it initially seems. Uniform prove themselves here to be comfortable on both sides of the twenty-first century noise divide between the floor and the pit. Some moments here seem geared towards the dingy metal bar, whilst others seem to be catering towards a loud and antagonistic basement techno club. So, to refer back to the names I mentioned earlier, ‘The Lost’ is reminiscent of Cabaret Voltaire, whilst ‘The Killing of America’ is closer to Slayer.

This attempt to marry together two equally confrontational (in their own distinct ways) musical forms reaps real rewards, and undoubtedly makes Wake in Fright a more consistently provocative record than the duo’s debut. It’s apparent, however, that Uniform’s default setting is better considered in terms of aggression. Wake in Fright’s selling point is that – no matter how well it binds together varied musical strands – it is that rare contemporary record that convincingly portrays real hostility.

Greenberg’s own words sum the situation up best: 'We are surrounded by war and the whole world is burning and it doesn't seem like there are any appropriate reactions or responses left anymore. This music is our response to and our reflection of the overwhelming violence, chaos, hate, and destruction that confronts us and everyone else in the world every day of our lives.' Even if one may question whether Wake in Fright’s bludgeoning assault really does manage to be both reflective and reflexive in the way Greenberg outlines, few could deny that – in times like this – there’s a need for bands like Uniform. If you’re looking for a soundtrack for punching Nazis in 2017, you might have just found it.