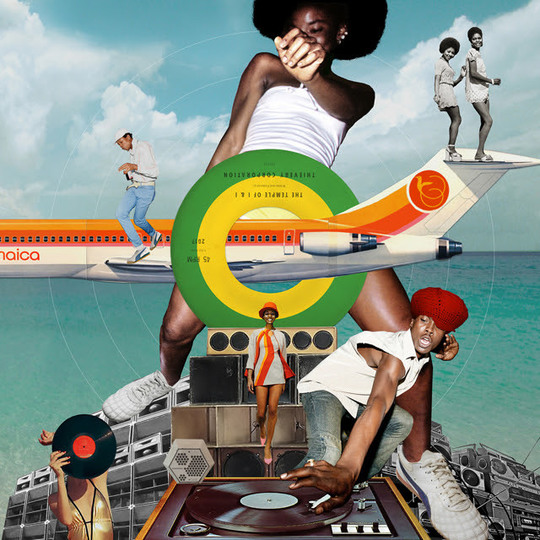 If anyone can dub it, Thievery Corporation can. Here’s an act whose sound very much embodied the turn of the century. Coffee table, lo-fi ambient dub; A mutant form of trip-hop that defined the lounge music sound of the Noughties. Alongside such peers as Boozoo Bajou, Tosca and Peace Orchestra, the production duo comprising of Rob Garza and Eric Hilton set the template for chill-out compilations and soundtracks for the more middle-aged connoisseurs in us. Their previous outing Saudade was a modern age classic; a soft, bossa-nova influenced pastiche of dream beats and palettes. There’s also earlier records Radio Retaliation and The Mirror Conspiracy, classics in their own right. The Temple of I & I, although not a massive divergence in their sonic template, has a more roots and reggae feel. Recorded in Jamaica no less, the LP has that modern reggae sound, with a mixture of live instrumentation, local guest vocalists and digital trickery all mixed together like a chilled rum and cola, sipped on a sunny, evening.

Alas, The Temple of I & I, does not hit the high benchmarks of prior quality. Very much a Thievery album in its own right, with the tropical rhythms alongside the DC-based musicians approach to studio-dub, the LP falls short of the classic peak moments of the past. That’s the problem with nostalgia, you’re always reflecting back on the good times, or ones which you favour towards. For an act with such history, and one eye on the past, nostalgia can be as equally as rewarding and destructive depending on which way you look at it.

And if The Temple of I & I sounds dated it’s because that’s what Thievery Corporation are best at. It’s another long-player that’s perfect for lighting a spliff to, and is seasoned with tracks that will undoubtedly find their way onto Late Nite Tales compilations and such. But it feel like the 'Jamaican approach' has been done many times before – even by themselves. From 1997, Sounds from the Thievery Hi-Hi was a dub-influenced, chill-out classic. But let’s face it, Thievery Corporation have never set out to be groundbreaking. So if you loved Radio Retaliation or still go crazy over The K&D Sessions, then don’t be surprised when these tracks start gently wafting into your Spotify recommended lists. As for me, I’m going to go back to listening to Saudade .