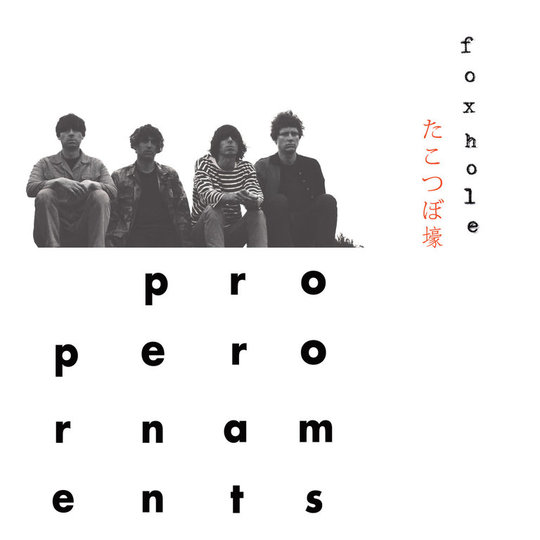 Not all bands start with a simple advert on a pin board. Take The Proper Ornaments. One day, Max Oscarnold, who mans the synths in Brighton avant-rockers TOY, walked into a vintage clothing store with a 'troubled' girlfriend. Oscarnold was asked by said girlfriend to distract the clerk so she could steal a pair of boots. The clerk, however, happened to be James Hoare, the crazy prolific songsmith of Veronica Falls and more recently, Ultimate Painting.

Fortuitously, Hoare was passing his time reading Up-Tight, a book about The Velvet Underground by Victor Bockris and Gerard Malanga. Safe to say, Oscarnold's curiosity was piqued. The two hit it off instantly and well… let's just say them shiny, shiny boots stayed right where they were stored.

Like a proper pair of boots, The Proper Ornaments' second effort Foxhole is a noticeably more polished outing compared to predecessor Wooden Head. Gone are the raggedy fringes of distortion and sepia-toned textures, making way for soft, velvety pop classicism. Docile strummers like 'Just A Dream' and 'When We Were Young' evoke that typical Sixties West Coast levity, with Hoare's dreary vocals anchoring subtle shifts in melody. The album seems to deliberately drift in this tranquil state, with some well-designated, deft takeoffs here and there; the ethereal synth proliferations of 1969 and the baroque piano dirges of Memories being the most notable.

Indeed, Foxhole is beautiful, almost in that unabashedly quaint sense. Hoare and Oscarnold have opted for a wider sonic palette and operating space, giving their songs added depth with piano and acoustic guitars. Despite Foxhole's apparent unruffled dawdle, the recording process hit an unfortunate cul de sac. Hoare and Oscarnold were left stuck in the mud after they recorded drums and bass on an – unbeknownst to them – broken 8- track recorder. Just like that, all that time and money spent on recording was for naught. Concurrently, Hoare and Oscarnold's friendship deteriorated due to frenetic personal circumstances and hardships.

Just like The Proper Ornaments' genesis, a precarious situation ultimately proved beneficial. After the stormy clouds cleared, Hoare and Oscarnold re-recorded the whole thing in Hoare's makeshift bedroom studio. The economic recording space was at odds with The Proper Ornaments' expanded instrumentation, in essence coercing Oscarnold and Hoare's respective voices further together. Hymnal closer 'The Devils' and 'I Know You Now' evoke a sense of mutual acceptance, while at the same time acknowledging the encumbrance that coincided with it. Both tracks sound like some hermitic musical intervention between the two.

Foxhole by no means grabs you immediately. Its emotional highs are few and far between all that sun-drenched melodic crispness. This leaves a significant void between exerting yourself to listen attentively or letting the songs placidly wash over you. The album's quirks and murmurs of dissonance don't tug the interest enough to consider Foxhole to be far beyond the elemental pop Hoare and Oscarnold are already testimonial to. 'Bridge By the Tunnel' – in all its humdrum simplicity – is elemental pop done right however, immediately evoking a kindred allegory by this ubiquitous pop classic: to rise over troubled waters, the bridge needs to built from both sides.

With Foxhole, The Proper Ornaments often make going through the motions sound like some revelatory train of thought.