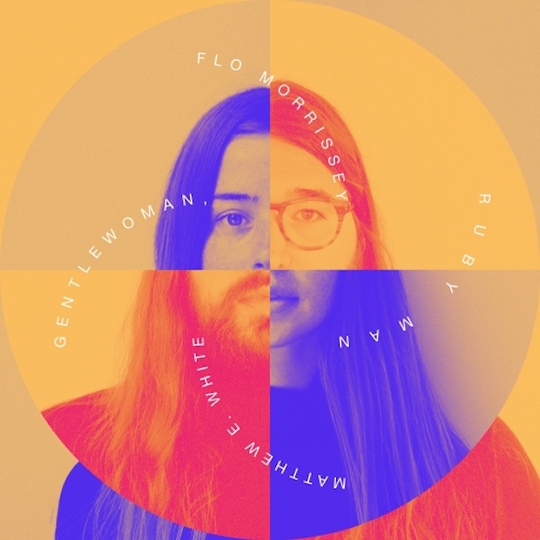 “Conventionality belongs to yesterday” sing Flo Morrissey and Matthew E. White on their cover of ‘Grease’, the 1978 classic from the glitzy all-American hit film.

It is perhaps an unlikely choice for these two: Morrissey, a clear-voiced Notting Hill folkie whose debut album Tomorrow Will Be Beautiful was released on Glassnote Records in 2015, and White, a bearded Virginia native with a gospel-inflicted bluesy outlook and two critically-acclaimed albums. In fact, the coming together of these two vastly different voices at all seems unlikely. Yet it happened: this record of covers is proof of their creative counterpoint.

Morrissey and White first met at a tribute to Lee Hazelwood concert at the Barbican in 2015, when they dueted on ‘Some Velvet Morning’. The track doesn’t appear on Gentlewoman, Ruby Man. Instead, the two collaborated at White’s Spacebomb sudios in Richmond, Virginia to put together this eclectic mix of ten covers of tracks by Little Wings and Leonard Cohen, Charlotte Gainsbourg and George Harrison.

Most striking is their vocal contrast. Flo Morrissey’s voice is agile in the top ranges, a pure folk sound to threaten any Joni Mitchell, hallowed with the occasional freak folk-tendencies of Kate Bush. Matthew E White’s is raspy, a deep, but intimate, tremor that is at home alongside the emotive pedal steel and electric guitar which made his name on 2012’s Big Inner.

Together, the pair have the vocal range to take on tracks like ‘Thinking Bout You’, a stand-out from Frank Ocean’s hugely successful 2012 debut Channel Orange. What Ocean’s voice can do alone, Morrissey and White must share out. White tackles the lower grizzly lines, with Morrissey’s brightly soulful vocals swanning over the top with “Well no, I don’t think so far ahead…” The track is transformed into something remarkably cosy, with the playful back-and-forth between the two singers acting as a lovers’ duet reminiscent of Ella Fitzgerald and Louis Armstrong, or Marvin Gaye and Tammi Terrell.

This Gentlewoman and Ruby Man perform a rendition of James Blake’s ‘The Colour in Anything’, the gut-wrenching heartstrings which the Londoner pulls on his 2016 record of the same name sizeably pared down. Laden with Morrissey’s cleaner vocals, the track becomes something much more straightforward, losing a fair bit of the momentum and grit which carries the original version into dizzying hearts of tales of lost love.

This record tames its chosen songs, moulding them into softer and smoother beasts, and producing altogether sanitised interpretations. Leonard Cohen’s ‘Suzanne’ is tackled with a whisper by White, as Morrissey’s notes float around in the ether overhead. The result is a sugary sweet rendition of a classic which is perfectly charming, but lacking much of the sensuality of Cohen’s original.

The slick sheen produced by these arrangements allows the pair to lend a bright bounce to Little Wings’ ‘Look at What the Light Did Now’, making for a groove-inducing opener, and the treatment to the Velvet Underground’s 1967 ‘Sunday Morning’ moves this 50-year-old track to something far more resounding than the celestial original.

As with all the best partnerships, the morphed faces shown on the album cover aren’t quite enough by themselves. It’s the tunnel-like vocal treatments and heavier, pick-laden guitar lines which bring the high points of this record. Though Morrissey and White do well to bring such an assorted roster of songs under one single glossy coating of an album.

As well as producing records for the likes of childhood friend Natalie Prass at his Spacebomb Studios, White leads the jazz avant-garde big band Fight the Big Bull, for which he composes and arranges all the music. It is his trained ear for rich instrumental arrangements – for the woozy space given to ‘Everybody Loves the Sunshine’ and the cosmic breakdown heard half-way through ‘Looking For You’ – which saves Gentlewoman, Ruby Man.